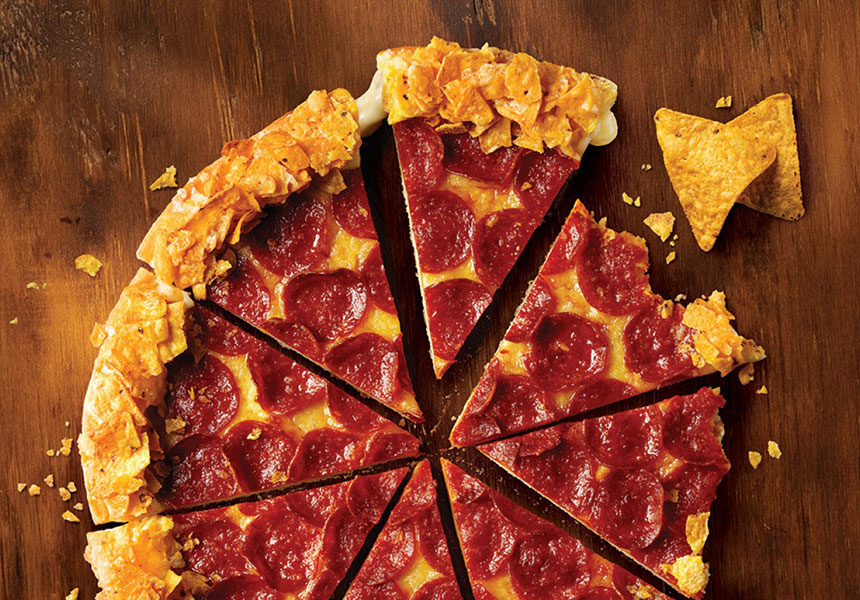 In what is either the greatest tragedy or triumph of our time – depending on your perspective – Australia has followed in the footsteps of all great American fast food joints by combining two disgusting junk food species into one calorific monstrosity.

The culprit is Pizza Hut, which muscled in on the overseas novelty junk food action with their own unique offering: the oozy, gooey Doritos crust pizza.

The selling point is, of course, the unique crust, which is laden with crushed Doritos corn chips.

Pizza Hut is billing as “the kind of pizza that needs to not only be eaten, but heard to be believed”.

“We know from research how big an impact the crunch sound has on one’s appetite. As you bite into the crust you’ll be blown away – it’s not only seriously loud, but delicious,” the company said in a statement.

At $14.95, the pepperoni version of the limited edition pie delivers a whopping 820 kilojoules a slice which is, if you look at it with rose-coloured glasses, great value for money.

To give you a comparison, a McDonald’s Big Mac contains 1030 kilojoules, so if you were to consume an entire Doritos crust pizza, you’d be consuming the equivalent of around seven Big Macs.

One slice would take approximately 20 minutes of high-intensity exercise to burn off.

If you’re not willing to give into the temptation just yet, don’t worry. We did it for you.

Here are our findings:

• It looks nothing like the photo. The corn chips are virtually indistinguishable thanks to a golden layer of cheese.

• The sight of the oil soaking through the base of the box will make you hate yourself. Be prepared.

• The smell is both intoxicating and disgusting. Leave it to hang around long enough and it will come to represent to you all that is wrong with the world.

• The taste of the crust is reminiscent of an overcooked taco shell – not necessarily a bad thing.

• Biting into the crust does not elicit a resounding “crunch” as promised, but rather a mild crackle.

• The texture is doughy and soft with very little chew, definitely not ideal for those who enjoy their pizzas thin and crispy.

• The melted cheese crust filling is the pièce de résistance, with its mild flavour and silken texture providing a necessary contrast to the sharp crunchiness of the crust.

Your brain and arteries will hate you for it and the post-pizza comedown feeling is akin to that of a mild hangover, but the pull of that vaguely Mexican aroma is too great to deny.

Speaking of hangovers, you will most probably have to be drunk in order to justify eating this. Consuming it sober doesn’t feel quite right.

Insider’s tip: cut the calories and prioritise the best part by eating it crust-first and ditching the rest of the pizza.

We ate the Doritos crust so you don’t have to