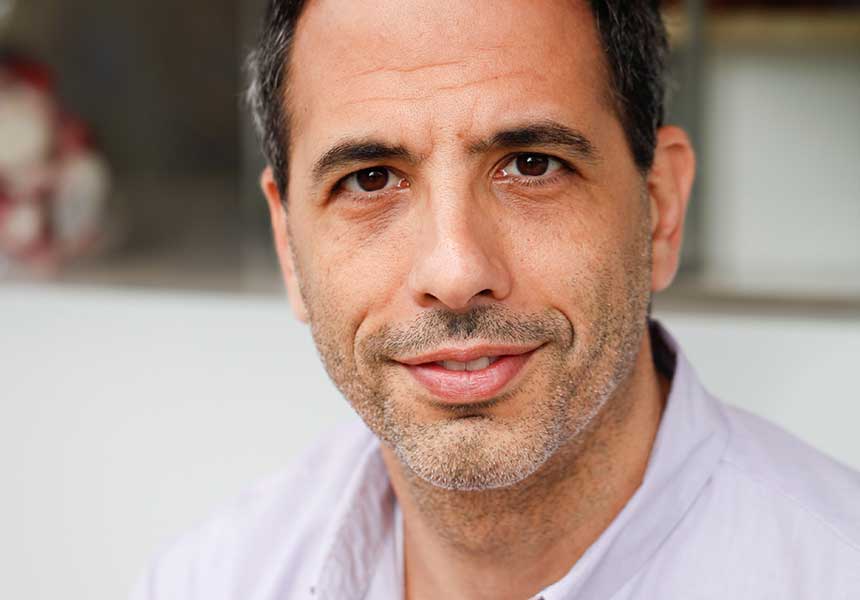 I’m talking food to the diner sitting next to me in one of London’s newest restaurants, and it turns out that he has worked with Yotam Ottolenghi, the Israeli-born chef who has captured the heart of the city. So what’s he really like?

“Yotam is lovely. There’s no dirt to dish up. And incredibly smart,” he says.

Ottolenghi has turned the day into one long dining experience, with little demarcation between breakfast, lunch and dinner.

The last comment is no surprise. Until his epiphany that he wanted to make a career in food, Ottolenghi was a philosophy student, and had just completed his master’s thesis on aesthetics in Amsterdam. Lucky for the rest of us that he realised the meaning of life was in its celebration at the table.

Win one of five copies of Ottolenghi’s Mediterranean Island Feast DVD, courtesy of Madman Entertainment. Email us your name and address here to win. That was in 1997, shortly after which Ottolenghi went to London and learnt to cook, first at Cordon Bleu, then at a series of restaurants before opening his own self-named restaurant in 2001 at Islington with chef and business partner, Sami Tamimi.

For the past decade, Ottolenghi has dominated the London food scene. He’s been a food and recipe columnist, published a number of recipe books, and has a couple of TV series under his apron belt.

Those who have wrangled with his recipes will know they call for a well stocked pantry of Middle Eastern exotica; ingredients such as pomegranate molasses and baharat spice mix. Can’t find the latter in your supermarket shelves?

Not to worry, you can make up your own by grinding together another eight spices yourself (recipe p99 of his best-selling cook book, Jerusalem).

But all that work and preparation pays off.  The dishes you create under Ottolenghi’s guiding hand taste wonderfully different to anything else that’s likely to have come out of your kitchen.

If you’re lucky enough to visit London, you can let the great man – and his chefs – do the cooking for you. His mini-empire comprises four establishments which range from a small deli where you can buy provisions for a take-home meal, to his up-market Nopi restaurant (that’s North of Piccadilly) in London’s theatre district. All four share a common theme: benches groaning with large platters of glistening colourful vegetables and salads. The food displayed is so beautiful and enticing that you could just, well, eat it!

A year ago, while I was queuing for a table for brunch at the Islington Ottolenghi, I took the opportunity to ‘phone a friend’ for menu advice.

“Every time I eat there, I choose the toast,” she said.

Surely she was kidding. How could you come to this temple of food and settle for toast? Instead, I plumped for the house-smoked salmon with scrambled eggs; my son went for the rich spicy ragout of shakshuka. As we ate our meals, we watched ‘toast’ being served to the other diners. This consisted of a wooden board piled with home made brioche, croissant and other breads, and delivery of a personal Dualit toaster which was affixed by the waiter to electrical flex hanging from the ceiling.

You could toast your bread to the desired colour and enjoy each piece hot. The condiments included a banana jam, a berry jam and Ottolenghi’s take on Nutella with a roasted hazelnut chocolate ganache.

My son and I looked at each other. Yep, we’ll have to share one of those for ‘dessert’.

And so we waddled out from our brunch, converts to the not-so-humble toast.

Once you’ve eaten at his cafes, you have to up the ante and head to Nopi. Not that this is starched white napkin territory, but it does qualify for a special occasion.  While you can opt for traditional entree, main and dessert dishes, the better way to go is to mix it all up and share.  Most of the meals are tapas size and allow you to do that. The down-side is that you will over order, because everything sounds so damn delicious. Luckily, it actually is. While all his food is wonderful, Ottolenghi is best known for his exotic vegetable dishes. The variety and inspired combination of flavours would turn the head of the most ardent meat-lover.

On a recent visit to Nopi, we almost didn’t make it to the quail with pear and rhubarb or his famed twice-cooked baby chicken with lemon myrtle salt and chilli sauce (but we did). Our first orders were for the tender stem broccoli with spiced buttermilk and black fungus, the burrata cheese with clementines, coriander seeds and white balsamic, and the roasted eggplant with sorrel yoghurt and pecans.

As well as blurring the line between sides, starters, nibbles and vegetables, Ottolenghi has turned the day into one long dining experience, with little demarcation between breakfast, lunch and dinner.

At Nopi, lunch takes over from breakfast at midday and runs until 5.30pm, when dinner comes on and goes until 10.15. Given that the evening menu doesn’t change, one wonders why the distinction is made at all.

Ottolenghi has done more than change the way we eat, when we eat and what we eat, he’s led the charge for Israeli food which has become the flavour of the moment.

Win one of five copies of Ottolenghi’s Mediterranean Island Feast, courtesy of Madman Entertainment. Email us your name and address here to win. You’ve bought his books – but who is Yotam Ottolenghi?