When Reserve Bank governor Philip Lowe jacked up the cash rate by a larger-than-expected half a percentage point on Tuesday, it delivered an unpleasant shock to home buyers as repayment increases loomed.

Westpac announced on Tuesday evening that it would pass on the full rate hike to its variable-rate customers and CBA, NAB and ANZ followed suit on Wednesday.

But savers are unlikely to see the interest paid on their deposits rise as quickly.

Although banks are quick to slash deposit rates when the RBA is cutting rates, they are less inclined to follow the central bank’s lead when it is raising them.

“We don’t expect to see deposit rates move up much, which is disappointing,” said Sally Tindall, research director at consumer comparison site RateCity.

“Last time rates rose, there was a lacklustre response from the banks on deposit rates, and I can only imagine we’ll see that again.”

And this time around the banks have another reason to lift deposit rates even slower: They don’t need your money.

That’s because Australians socked away hundreds of billions of dollars during the pandemic, as they had fewer ways to spend their money.

The latest figures from regulator APRA show that Australians have $1.27 trillion in their savings – which is up $281 billion, or 22 per cent, since the pandemic started.

“The banks are flush with cash at the moment, so putting up deposit rates would be a very expensive exercise for them – one they don’t really need [to do],” Ms Tindall said.

Australia Institute chief economist Richard Denniss added: “Australian banks are among the most profitable in the world and they will hold deposit rates down to help them stay that way.”

In response to the latest RBA rate hike, Westpac has been the most generous with its saving customers to date.

On Tuesday it hiked the interest rate on its 12-month term deposits from 0.25 per cent to 2.25 per cent – a move Ms Tindall described as an “olive branch”.

But that’s still not a market-leading rate for these products. Ms Tindall said eight banks outside the Big Four are offering higher 12-month rates than that.

Westpac and Bank of Queensland are offering a couple of attractive deals on regular savings accounts, though.

That’s because these banks are interested in winning over younger customers who could potentially take out a home loan with them in the future.

Commonwealth Bank has also lifted some deposit rates. On Wednesday, it raised its youth saver rate by half a percentage point to 0.95 per cent, and lifted its GoalSaver account – aimed at home savers – to 0.75 per cent. 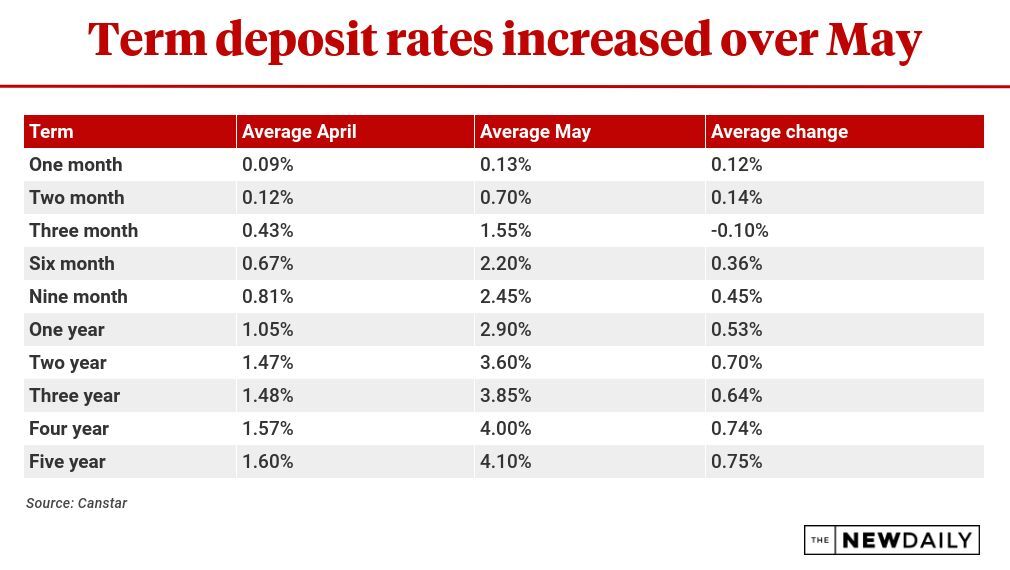 In May, when the RBA raised the official cash rate by a quarter percentage point, the banks were quick to hike mortgage rates.

“And those that did increase savings rates did so by figures like 21 to 23 basis points, rather than the 25 basis points of the RBA rise.”

But banks took a different approach to term deposits.

This is because inflationary fears have lifted yields in the bond market, which in turn flow through to fixed-rate loans and term deposits.