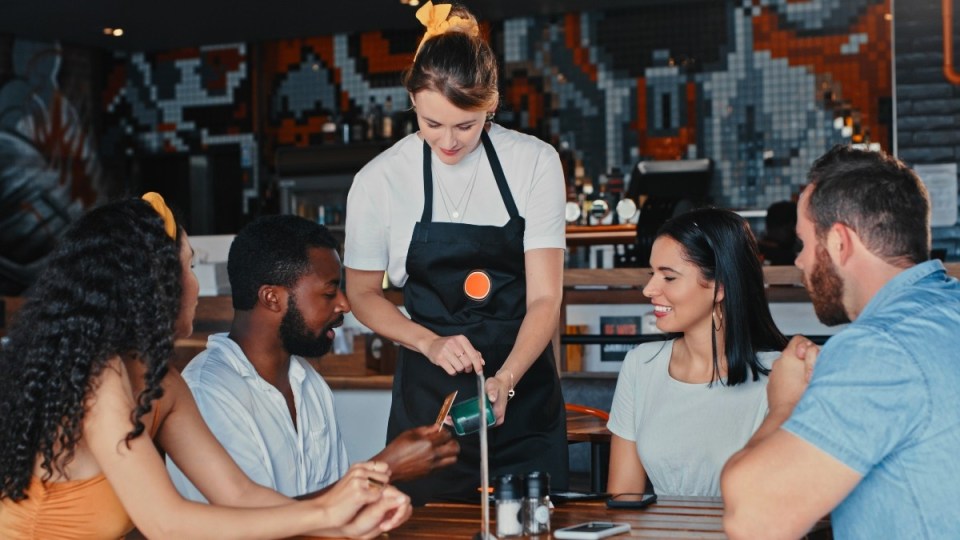 Talking openly with your friends could take the sting out of a restaurant bill. Photo: Getty

One in five Australians have gone into debt or spent more than they can afford to keep up with their friends and family, new Finder research shows.

The nationally representative survey of 1000 Australians found that 28 per cent had felt pressured to split a bill evenly at a restaurant despite ordering less food than their friends or family, 14 per cent had been pressured into going on an expensive holiday, and 10 per cent felt like they had no choice but to buy tickets to a concert or major sporting event.

According to Finder’s research, baby boomers picked up an average debt of $340 over the past six months as a result of peer pressure – a figure that rose to $1298 for millennials.

Financial advisers offered The New Daily the following four tips to keep a few extra dollars in the bank.

Having specific goals in mind will make it easier to sacrifice some expenses, she said.

These goals can range from buying an expensive pair of shoes, to making a big purchase in the future, such as a house or a car.

2. Be open with your friends and family

Open and honest communication with your nearest and dearest is essential to helping you stop spending more than you can afford.

Ms Mullins said telling your friends and family about your goals – and the expenses you need to cut back on to achieve them – will help keep you accountable and make your friends less likely to pressure you.

“Talk to your friends, tell them … you can still go out, but that you have to pull back a little in certain areas,”  Ms Mullins said.

“That might be splitting bills, or whatever your triggers are.”

Mr Robertson said Australians need to work on breaking the social stigma around talking about money.

He said even though it can be awkward to talk about your finances, other people in your social circle could be struggling to keep up appearances, too.

He suggested using an app to split bills fairly when going out with a group, or asking others to chip in if you’re on the hook to pay for a big event like a buck’s night.

3. Treat yourself, but choose wisely

Limiting your spending doesn’t mean you have to miss out on all the fun.

Mr Robertson said allowing room in your budget to treat yourself could help keep you on track – provided you’re spending the money because you really want to do something and not because you have a fear of missing out.

“If there’s an Ed Sheeran concert, and that’s really important to you, great, go do it,” he said.

“But if there’s an Ed Sheeran concert, and you want to listen to Snoop Dogg instead, don’t go for it.”

Finally, hanging out with your friends doesn’t have to hurt your wallet.

Instead of splashing out on a fancy dinner, you could enjoy some fish and chips by the beach, or organise a games night with friends and have a home-cooked meal.

If you’re still feeling the pressure to maintain a certain lifestyle, Ms Mullins said you should learn to say ‘no’ now, so that you have the freedom to say ‘yes’ to other things later.

Melania Trump: Bombshell revelations about what she did during US Capitol riot
Retailer pauses facial recognition tech trial after privacy complaint
Donald Trump grabbed at steering wheel in bid to get to Capitol riot
Two charged over US migrant truck deaths
Governor-General admits ‘mistake’ over Insta ad endorsement
Nick Kyrgios spits at ‘disrespectful’ fan at Wimbledon
How to use co-contributions to maximise your superannuation payments
Today's Stories

One in five of us feel peer pressure to spend. Here are four tips to help