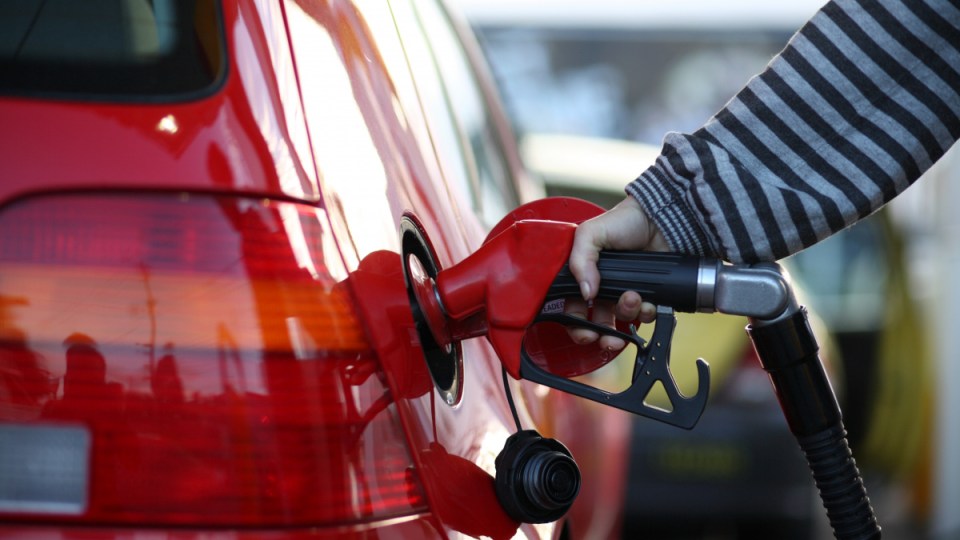 Easing global oil prices on fears of an economic slowdown could help motorists with their seemingly ever growing petrol bill. Photo: Getty

Petrol prices are climbing back to pre-COVID levels as restrictions ease and Australians eye up domestic holidays.

Analysis by comparethemarket.com.au found that motorists across the country paid an average of 122 cents per litre for unleaded petrol over the three months to September 28.

That was nine cents more than they paid during the June quarter and 47 cents higher than the average price paid during the height of the pandemic in April, when prices hit a record-low 75 cents.

As families in the ACT, New South Wales, South Australia and Queensland count down the days until a long weekend, Compare The Market on Tuesday published advice for motorists who need to fill up their tanks before hitting the road.

Based on an analysis of average prices over the past three months, the comparison website urged motorists in Sydney, Brisbane and Perth to fill up their tanks sooner rather than later, as they expect prices in these cities to rise this week.

The analysis, which is based on data from the Oil Price Information Service, excluded Melbourne, Hobart and Darwin. 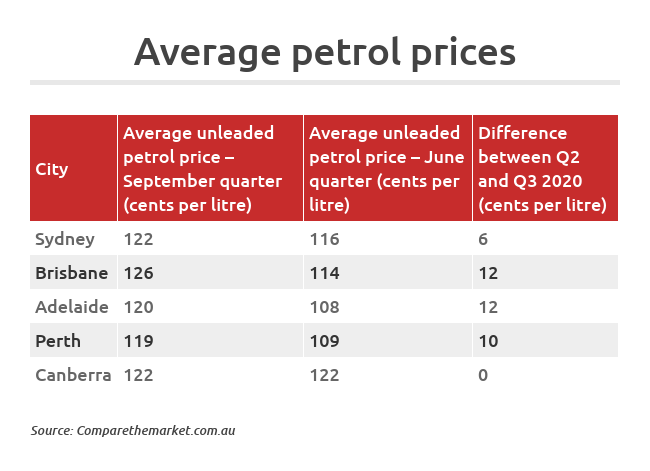 “With travel restrictions continuing to ease across the country, and most states allowing for a regional holiday, we advise motorists to shop around and compare fuel prices in their area, or pinpoint stops along the way if they are taking a road trip, to find the cheapest prices,” said Abigail Koch, household savings expert at comparethemarket.com.au.

And motorists hoping to stretch their dollars a little further would also do well to visit the Australian Competition and Consumer Commission website.

The consumer watchdog offers buying tips for motorists based on each city’s petrol price cycles, while comparison site Motormouth offers an up-to-date map of prices across the country.

In a report published in 2018, the ACCC estimated that drivers who fill up a 50-litre tank once a week would save between $150 and $520 a year if they visited a petrol station during the bottom of their city’s pricing cycle.

And a 2019 report found that consumers could have saved an extra $350 a year by shirking big-name brands, such as Coles Express, for independent retailers such as United.

The graphs below are from the ACCC and were updated on September 28. 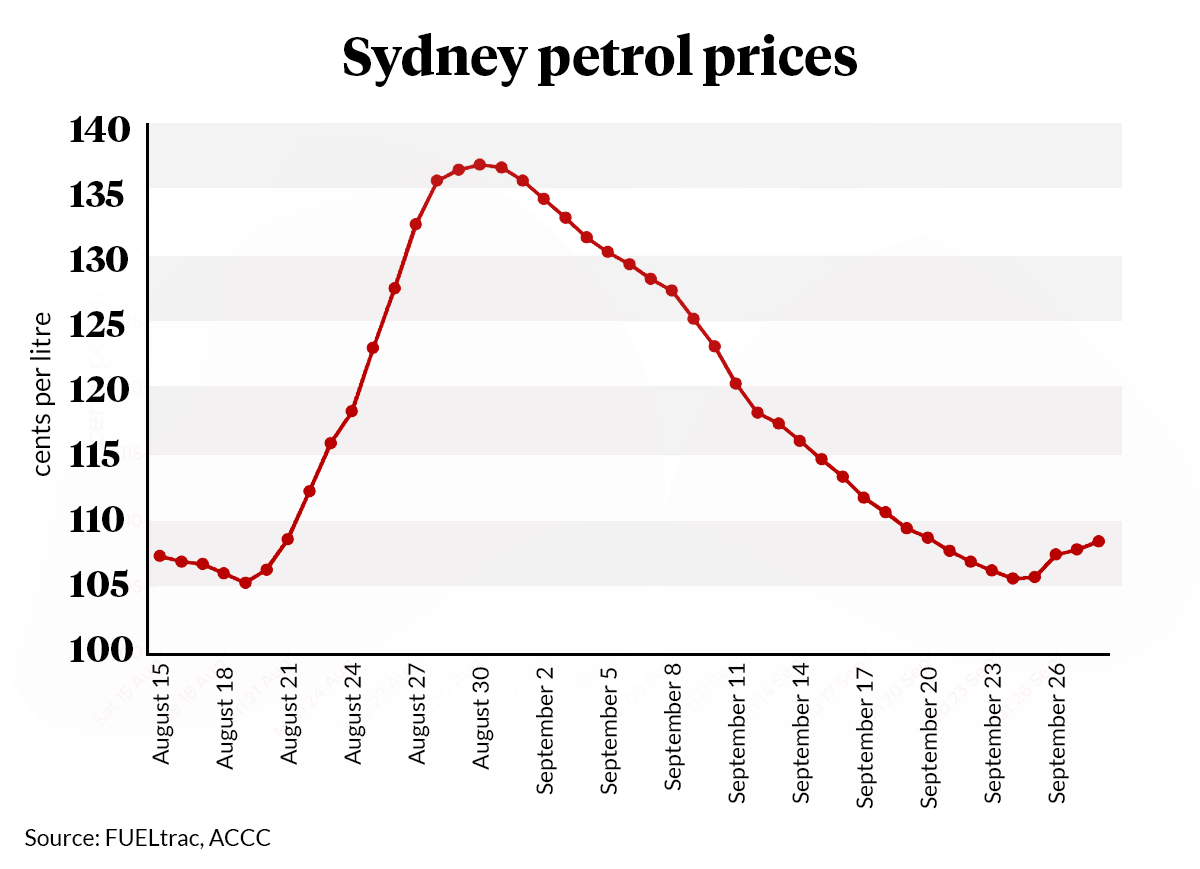 As the above chart shows, petrol prices are rising in Sydney at the moment, which is why Compare The Market is advising motorists planning to get away this weekend to fill up their tanks as soon as possible.

The comparison site says petrol prices will not reach their low point in the cycle for more than a month. 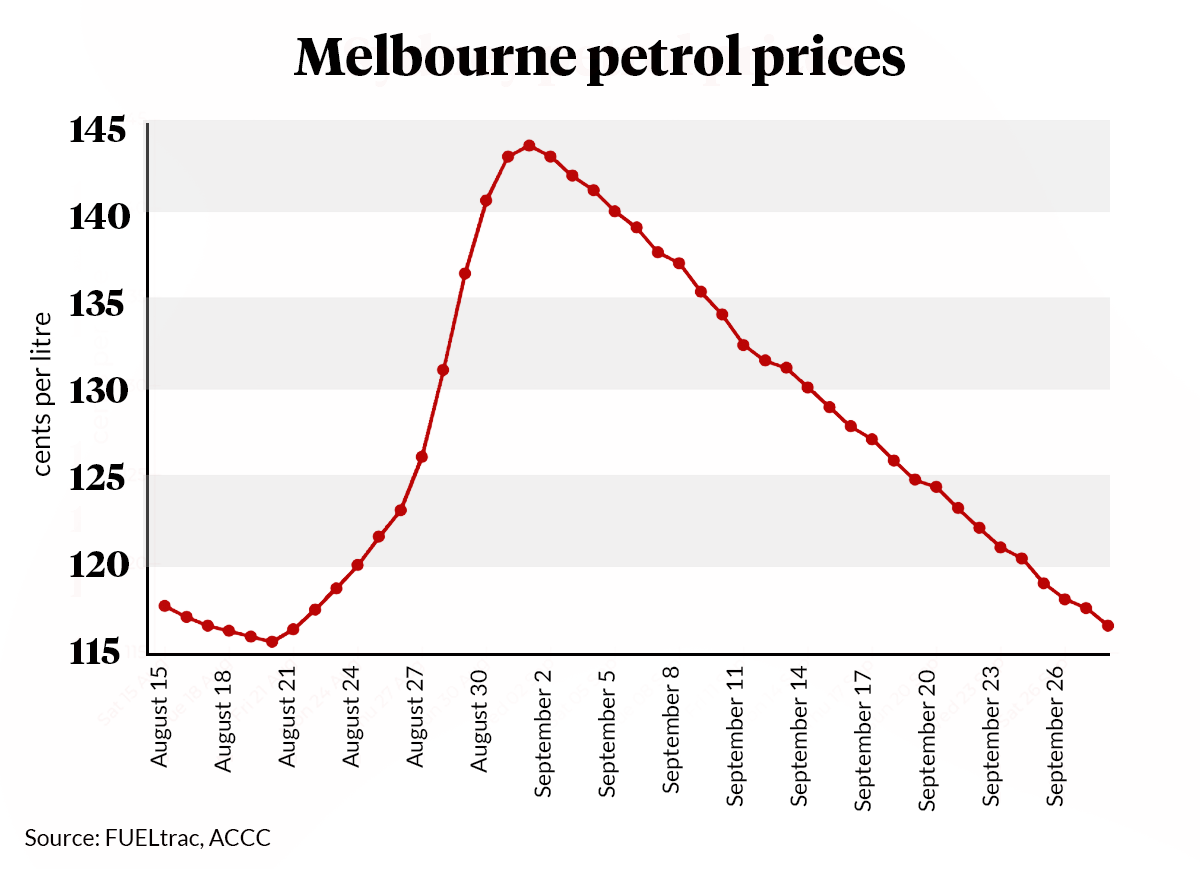 The ACCC says Melbourne’s petrol prices have reached the low point in their cycle, meaning now is a good time to fill up the tank. 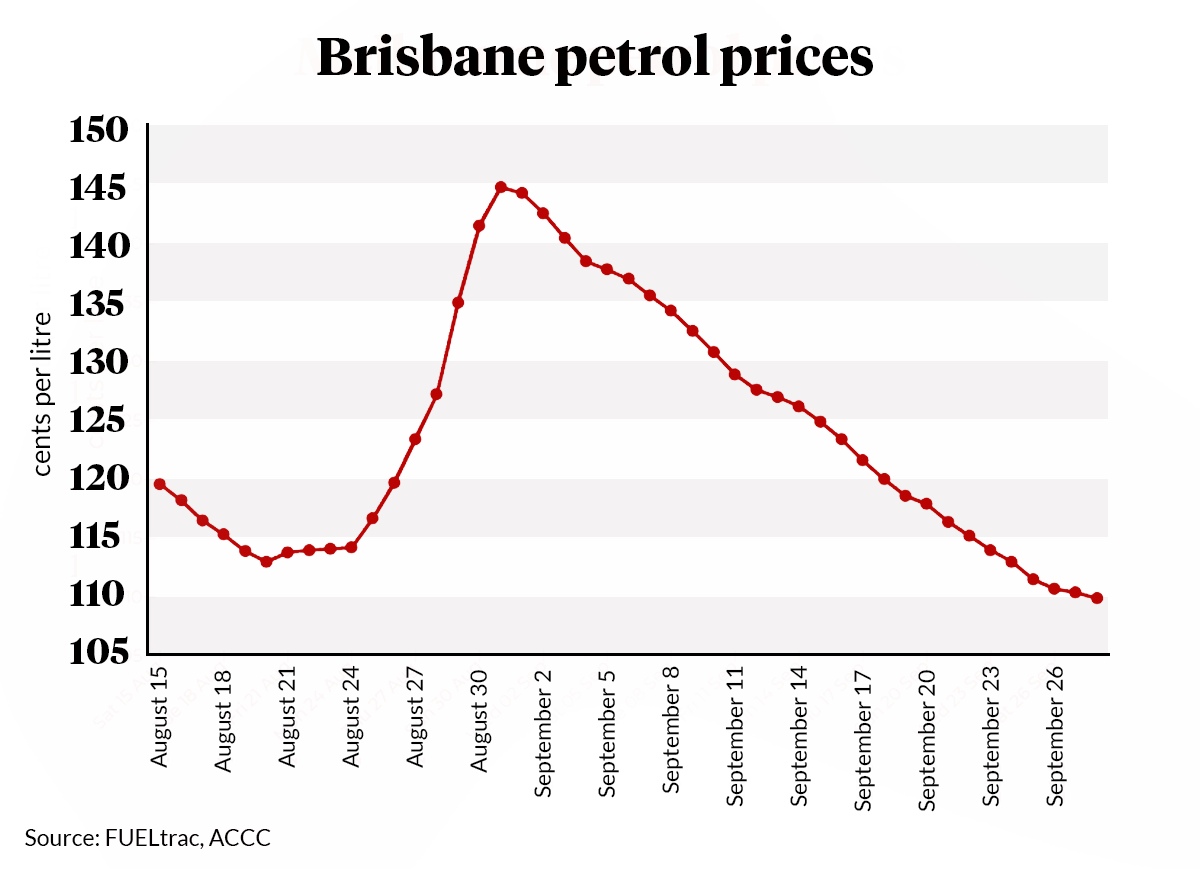 Prices have also reached their low point in Brisbane, according to the ACCC.

Compare The Market agrees, advising motorists to fill up today, “as prices are set to rise each day they wait”. 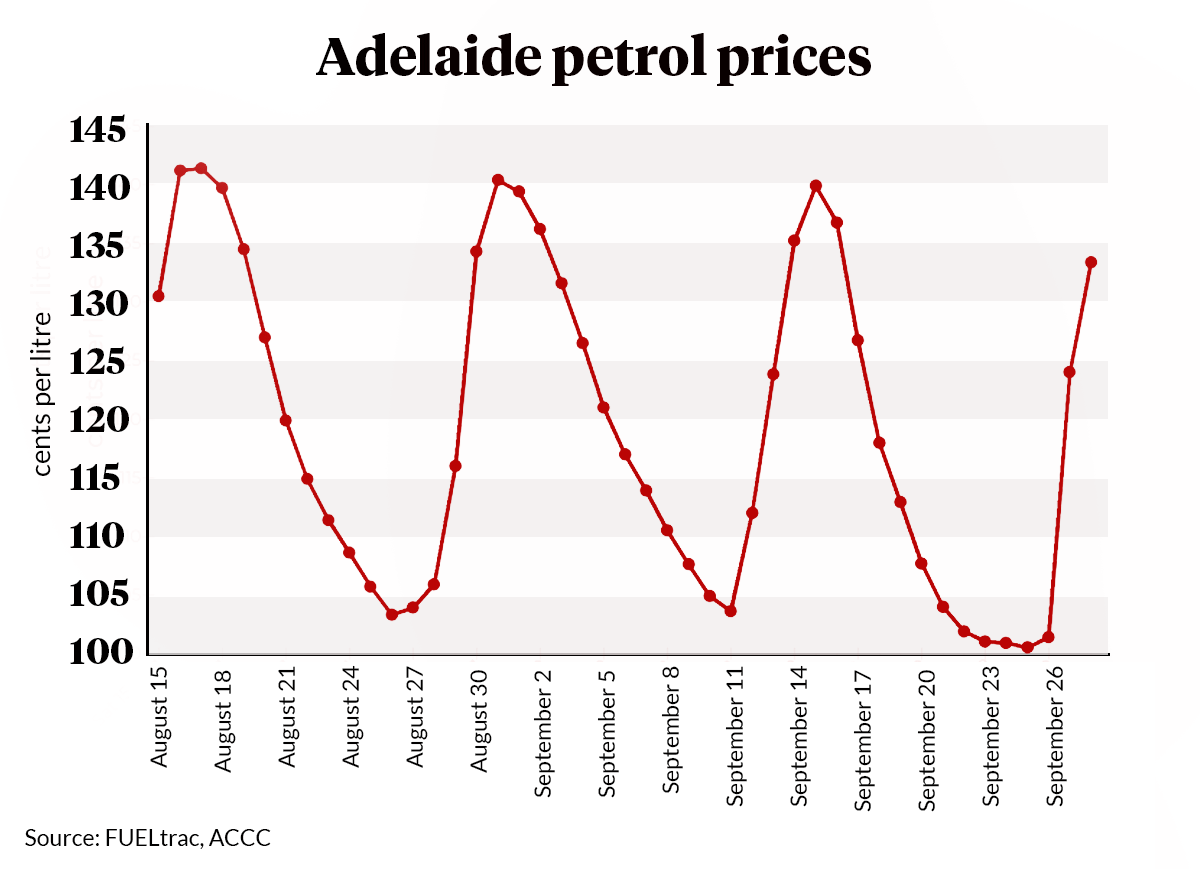 As with Sydney, Adelaide’s petrol prices are on the up again. The ACCC says motorists might be able to find retailers that have yet to increase prices if they shop around, but their general advice is to minimise purchases at the moment, and fill up the tank closer to the weekend.

Compare The Market offers the same advice. If prices in the city follow their recent two-week cycles, it said, then prices should peak on Wednesday and Thursday.

The comparison website also noted that the cheapest fuel in the country on Monday morning could be found in the north-east suburb of Hillcrest, at 95 cents per litre. 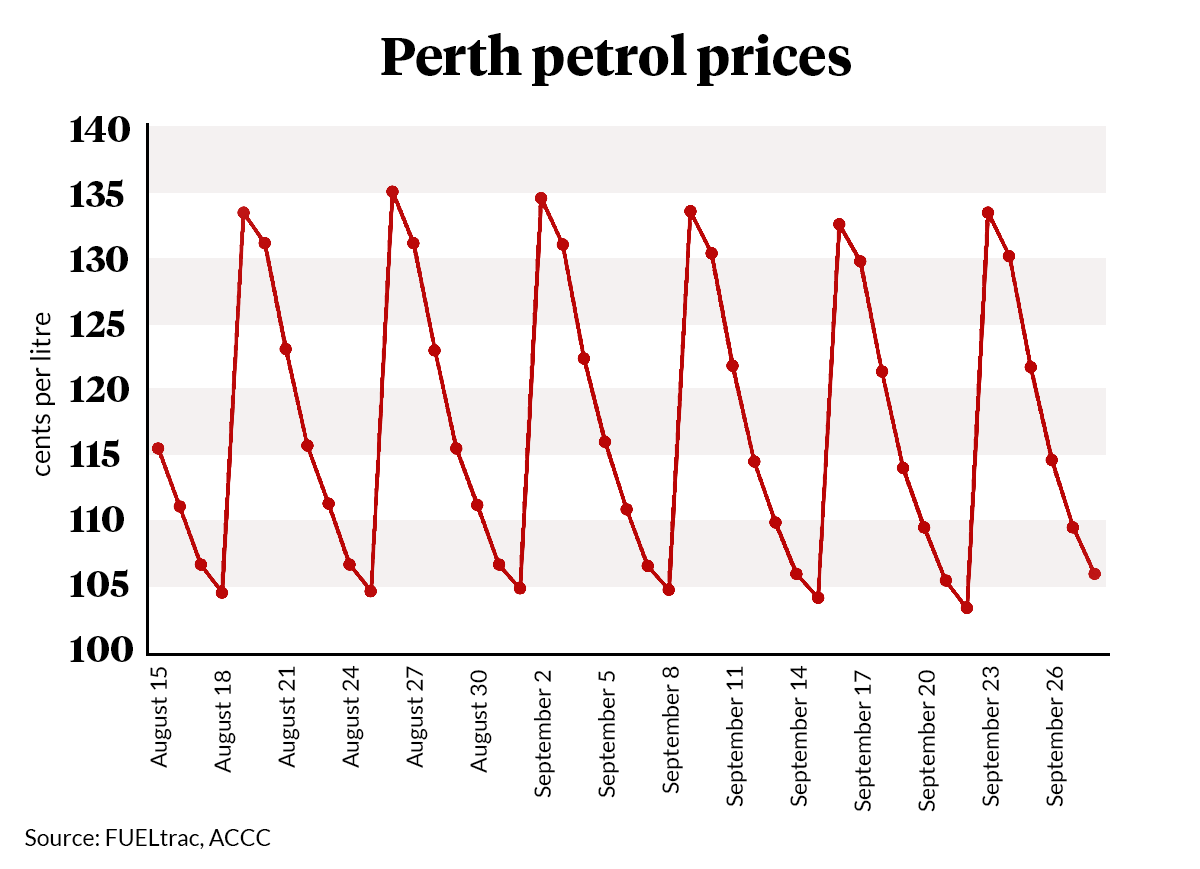 Perth has a different type of cycle to the rest of the country – with prices always peaking on a Wednesday and gradually falling to a low on Tuesday.

The ACCC doesn’t track petrol prices in Canberra, but Compare The Market is advising motorists to shop around as “prices are expected to remain relatively stable in the near future”.

Petrol prices: When to fill up your tank before the long weekend