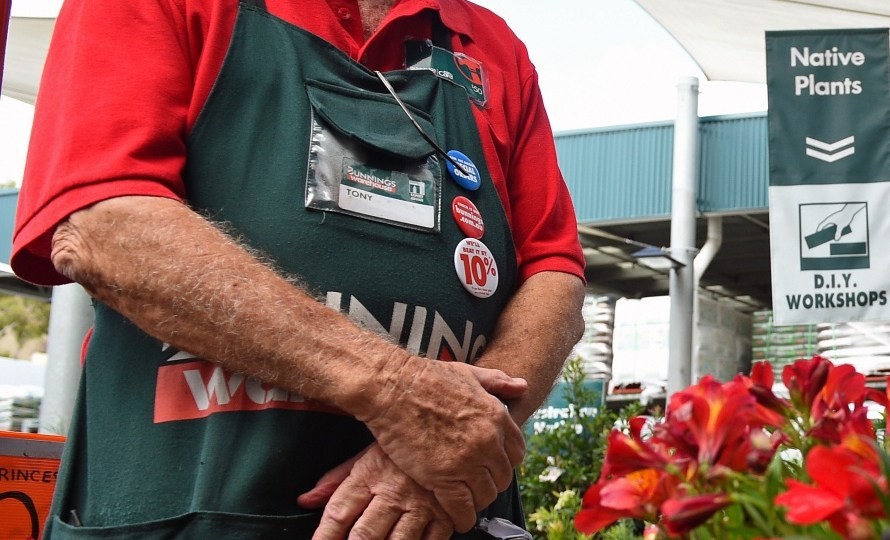 Australians like Tony Mebberson, 78, must be welcomed for the good of the economy, experts say. Photo: AAP

As outrage builds over a proposal to force Australians to work until 70, experts are urging businesses to follow the example of hardware giant Bunnings and unleash the untapped labour of older workers.

He pointed to the example of Bunnings, which has capitalised on large numbers of highly skilled tradespeople who were unable to continue in physically demanding jobs but could offer a lifetime of experience to shoppers.

“The key to this is for wise employers to see that by going against the discrimination they are making a wise investment,” he told The New Daily.

The Australian government sparked a national debate in recent days by confirming it still intends to extend the pension age to 70 by 2035. This would force many workers with small superannuation balances born on or after 1996 to toil for many more years – or apply for the dole.

It followed a warning from the World Economic Forum that Australia would be forced to push its retirement age to 70 by the middle of the century to avoid a retirement funding crisis.

While many are angered by the prospect of working longer, Professor Kendig said the economic benefits of higher returns from older workers could not be ignored.

“Enabling older people to stay in the workforce is a win-win.”

But he warned there needed to be a change of attitude.

“One key thing is to make the workplace more age-friendly,” Professor Kendig said.

“But it’s going to take a lot of effort to get that message out into the public.”

The Australian government launched the Restart Programme in 2014 with the aim of incentivising businesses to employ eligible job seekers aged over 50.

Dr Dina Bowman, a researcher at the Brotherhood of St Laurence, said the program was useful as part of an array of methods to get older Australians back to work.

But she said tackling ageism needed to start at the business level, during the recruitment process.

“I’m not sure that government can do a lot. I think employers play a really important role,” Dr Bowman told The New Daily. “Recruitment strategies are really key.”

Women suffer especially from a combination of ageism and what Dr Bowman referred to as “look-ism”, where women are judged on physical appearance.

“Mature-aged women can feel invisible. They may not feel as attractive as younger women.”

She said women could be caught up in caring for loved ones and the demands for work which made getting and keeping a job even more difficult.

This was reflected in recent official data that showed a four-month rise in unemployment among women aged over 55.

Dr Bowman said older Australians were at risk of being stuck in “a netherworld between not quite retired and unable to get employment”.

Professor Kendig said he hoped Australian businesses would wise up to the value many older workers can offer.

“One can only hope that enlightened employers are going to recognise the value for their work.”

Why we need Bunnings-style work for older Australians