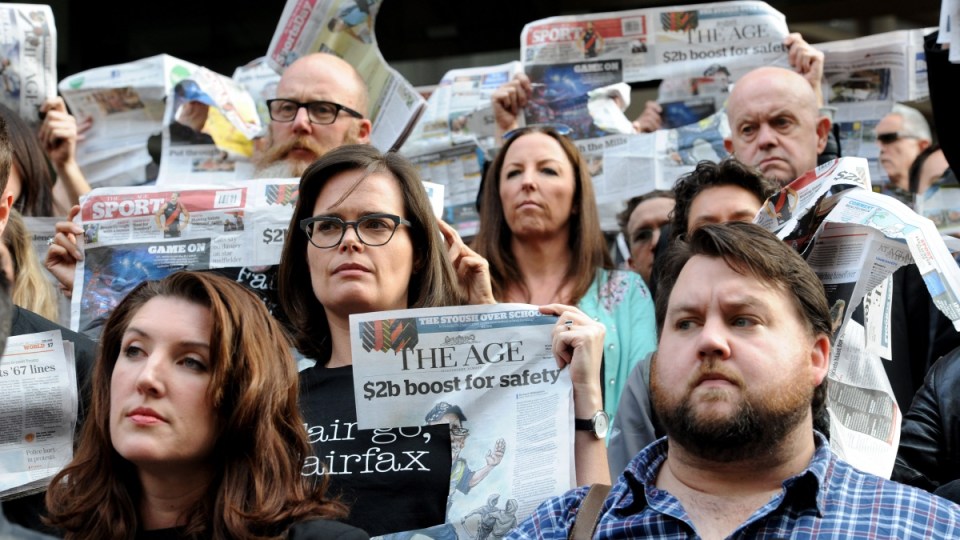 It was supposed to.

But this week 500-odd Fairfax employees are teetering on the brink, with years, if not decades, of entitlements at risk because Australian labour law deems their seven-day strike illegal.

If reporters defy an order by the Fair Work Commission they could be forfeiting their rights to redundancy payouts and accumulated long service leave. In some cases, a lifetime of dedicated service to the Fairfax brand could end with a kick in the pants and a door in the face.

Simply put, the current implementation of the Fair Work Act just doesn’t seem all that fair.

When I started as a Fairfax journalist with The Australian Financial Review back in 2009, the company had more than 1000 journalists across the country. It was energetic, it was vibrant. The place literally buzzed with the sound of people doing a bloody good job. We took up a whole building. The AFR had its own floor.

Fast-forward eight years and we’re looking at a Fairfax whose metropolitan newspaper staff can fit in a single newsroom. If management get their way it will be a cohort of around 375 people doing a job that used to take more than a thousand. Does that sound like fair dealing? How can that few people be expected to push out that much work in a day? How can there be any expectation of quality? Meanwhile management have been pocketing millions of dollars in executive salaries, does that seem like fair dealing?

The Fair Work Act has been increasingly problematic for a while. We’ve all heard about (and experienced) the “casualisation of the workforce”. It’s a reality of modern employment across many sectors.

It was only last month that the national secretary for the National Union of Workers, Tim Kennedy, was telling The New Daily the Act was falling woefully behind the times.

Casualised workers have no right to secure employment, no right to pay re-negotiation, no protection under the Act at all. This is the Wild Wild West, and you’re on your own, partner.

It will come as no surprise to consumers of news to hear that when media companies slash and burn their journalistic staff, those empty column inches are bought in from elsewhere. Sometimes that means wire stories cut and pasted from the AAP or Bloomberg. Sometimes that means junior staff hastily cobbling together stories direct from press releases. Sometimes that means paying a freelancer (one of the guys you just fired, probably) to do the work from home in his slippers.

That doesn’t sound too bad to some, but there’s no regular paycheque in pyjama-work and Fairfax is having a slog at making sure your friendly neighbourhood freelancer isn’t getting too comfortable either. Part of the announcement they made this week was to “cap contributor costs”, placing a limit on how much they’ll pay for those extra pieces that are literally the building blocks of their product.

Pretty soon there will just be sales executives scanning and re-purposing other people’s work with an automated news aggregation program on a single laptop. And all the lights turned out.