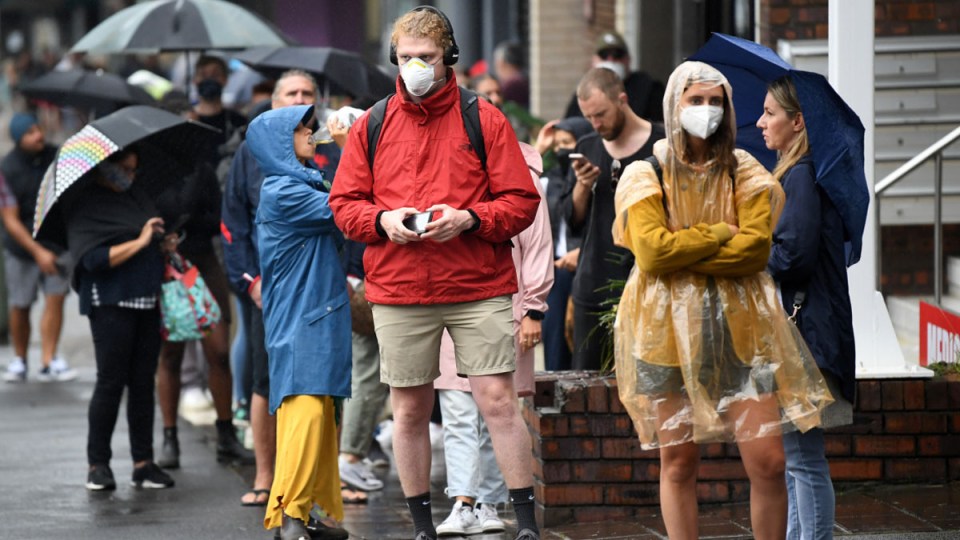 More than 1.45 million JobSeeker recipients will have to apply for eight jobs every month from September 28 to maintain access to unemployment benefits.

The Morrison government seized on a surprise fall in the unemployment rate to announce the reintroduction of mutual obligation requirements for all job seekers except those in Victoria – threatening to penalise those who refuse “suitable work”.

It said the labour force figures showed the economic recovery was well under way and businesses were looking to hire more workers.

But economists and welfare groups said it was too early to reintroduce the measures, as data shows there are roughly 13 job seekers for every job vacancy.

Australian Council of Social Service CEO Cassandra Goldie told The New Daily that asking people to apply for two jobs a week was unreasonable in such a competitive jobs market.

“And the return of Work for the Dole, which does nothing to improve employment prospects, could put people at risk under COVID-19,” she said.

Ms Goldie urged the government not to return to the “punitive system of compliance that characterised the employment services system before COVID-19”.

And federal Labor also has concerns.

Shadow Minister for Employment and Industry Brendan O’Connor said his party supported mutual obligation requirements in principle, as they kept people engaged with the labour market.

But he told The New Daily the requirements must be in line with local job market conditions.

“Right now there are 13 job seekers for every job vacancy, nearly 1 million Australians are unemployed and 1.5 million are underemployed,” he said.

“Mutual obligations shouldn’t be punitive and the government needs to deliver a plan for jobs, not just wind back JobKeeper and JobSeeker.”

A waste of time

Ms Morgan was made redundant from her job as a laboratory technician in 2012, and has mostly depended on government support since then.

She told The New Daily that a job agency once asked her to interview for a position requiring five years’ retail experience, even though she had never worked in the industry.

She said this was one of “countless” such experiences.

“They were furious when I told them that I was there because my payments were going to be cut if I didn’t go, and that I had no option,” she said.

“This employer said they had been so inundated with job applications by people who were not qualified, because of this very same reason.

“They are getting angry and they are putting in complaints against these job network agencies.” 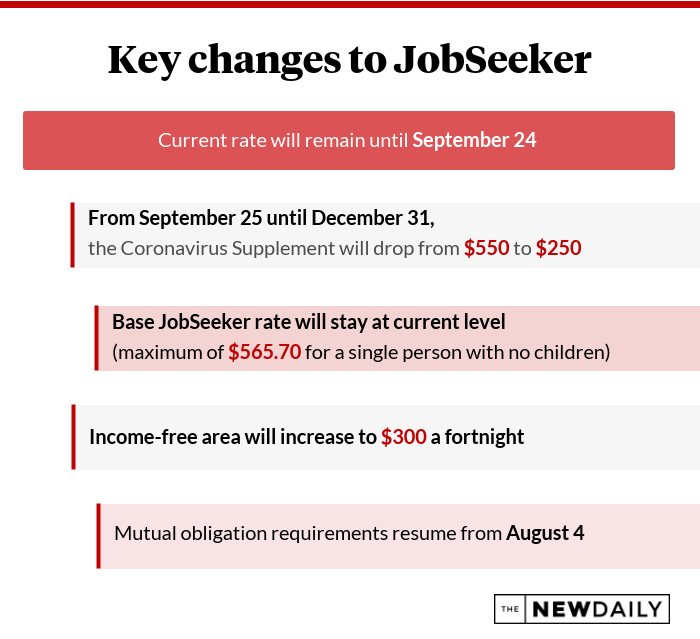 Single mother of two Sonia Torrens, 38, said she was “blessed” to find a job agency that accepted studying as part of her mutual obligation requirements – allowing her to enrol in a retail course from September 2019 to April 2020.

But the looming changes are keeping her up at night.

“They’re expecting people to apply for two jobs a week. That’s not a lot. But it’s also the case that if you’re offered a job and you refuse to take that job, then you [could lose your payment],” she said.

This is concerning for Ms Torrens, as she has disabilities and can only work certain jobs.

She is worried that Centrelink will cut off her payments if she refuses a job offer, and says authorities have rebuffed attempts to discuss her concerns ahead of the changes.

What’s more, the rate of JobSeeker will fall by $300 a fortnight from September 25.

Ms Torrens said she would have to skip meals again to ensure her children had enough food once the payments were cut. 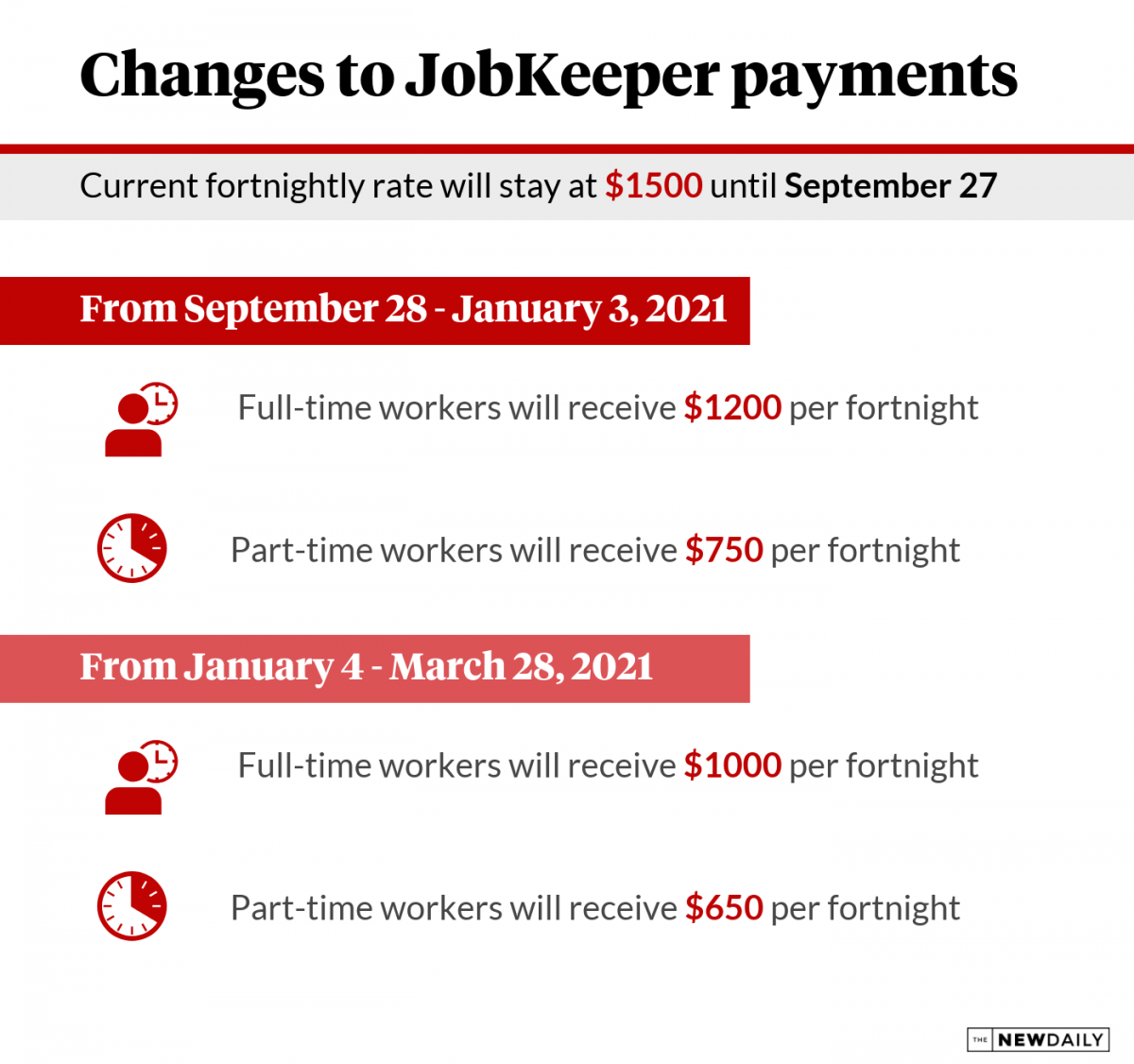 ‘No evidence’ it works

The announcement from the Morrison Government came one day after monthly labour force data showed official unemployment fell from 7.5 per cent in July to 6.8 per cent in August.

Over the month, the number of people counted as unemployed fell by 86,500, while more than 110,000 people gained employment.

Although the headline figure was better than expected, economists said the surge in jobs was driven almost exclusively by self-employed workers. And most of the jobs created since the height of the crisis have been part-time positions.

“I think there is a risk right now that as we transition back to the mutual obligations system, there’s going to be so many applications for the jobs that are available, that the likelihood of people getting these jobs is very low,” Mr Pickering told The New Daily.

He said the system created problems even before the crisis – compelling job seekers to apply for unsuitable jobs and saddling recruiters with unnecessary work.

She told The New Daily that mutual obligations and payment sanctions should be suspended, and planned cuts to JobSeeker immediately reversed.

“There is no evidence that mandatory training enhances people’s capacity to find work, and payment sanctions only increase levels of destitution, survival crime and ill health,” she told The New Daily.

“Until there is a COVID-19 vaccine, Australia should prioritise a strong income supports system as part of our public health response.”