The end of the financial year is almost upon us and that means it’s time to focus on superannuation to ensure you maximise your benefits in the current financial year.

One way to do that could be through making a voluntary contribution.

And if that’s what you are planning to do, you need to act now.

“So, if you are making a contribution using BPAY, a bank transfer or through your employer, don’t leave it to the last couple of business days as there could be a holdup.”

The Australian government imposes annual caps on superannuation contributions so you need to check whether you are still within these limits.

The first two involve contributing a portion of your salary into super before you pay tax on it and are processed by your employer.

And the third involves making voluntary contributions with after-tax dollars (i.e. transferring funds from your bank account into super) and claiming a tax deduction on these payments when you file your tax return.

Such contributions offer a major tax advantage, as they are taxed in your super fund at a rate of 15 per cent – which for most people is much lower than their marginal tax rate. 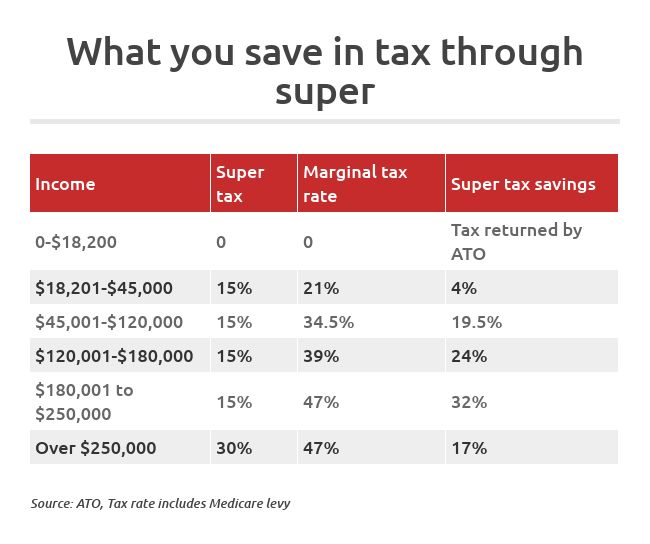 “If you’ve got an income of over $45,000, any money you put extra into super will save you 19.5 cents in the dollar,” said Robert Goudie, principal at Consortium Private Wealth.

And for those with higher incomes, the savings are even greater unless you earn more than $250,000 a year.

At that point, the super contributions tax jumps from 15 to 30 per cent, which still leaves a benefit of 17 per cent in tax.

Hot tip: You can find out how much you can pay into super without exceeding your concessional contributions cap by accessing the ATO’s online service through your MyGov account.

Click on the ‘Super’ dropdown bar and then go to ‘Concessional Contributions’ under the ‘Information’ tab to find out your available concessional contributions cap.

The ATO service can also tell you how much in unused concessional contributions you can ‘carry forward‘ from previous tax years, a concept that we explain below.

Since 2018-19, the federal government has allowed Australians to carry forward their unused concessional contributions caps from previous financial years.

The aim of the scheme was to help older Australians wanting to build up their super balances in the years before retirement.

What it means is that in certain circumstances, members can tip more than $25,000 into their superannuation in one year without having to pay extra tax.

This means she may be able to make up to $50,000 of concessional contributions in 2020-21, as the following table demonstrates: 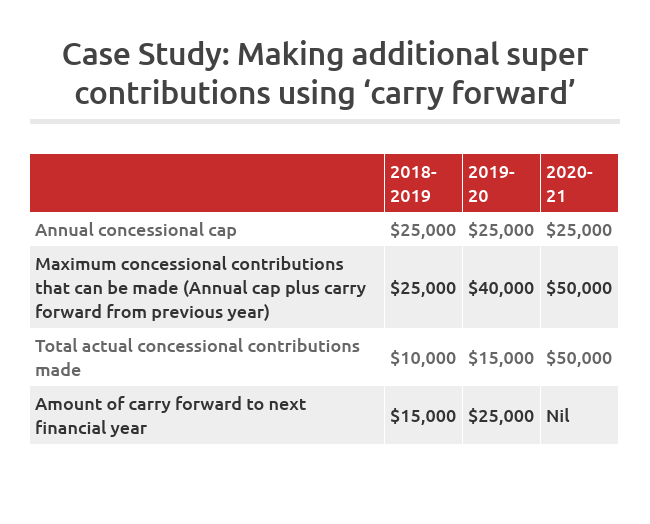 Hot tip: Concessional contributions include SG payments from your employer and the carry-forward measure is only available to people with a super balance of less than $500,000 at June 30 the previous year.

The federal government also runs a scheme to help low-income earners top up their super.

If you earn no more than $39,837 a year and make a voluntary super contribution of $1000, the government will pay $500 into your super fund as an incentive to save more.

The payment is known as a ‘super co-contribution‘ and cuts out at annual incomes above $54,837, with the maximum payment amount being $500.

If your annual income is between $39,837 and $54,837, your maximum entitlement will reduce progressively as your income rises.

And if you contribute less than $20, the government will pay the minimum amount of $20.

Members do not need to apply for payment.

If you are eligible for the scheme and your super fund has your Tax File Number, the government will make the payment automatically. 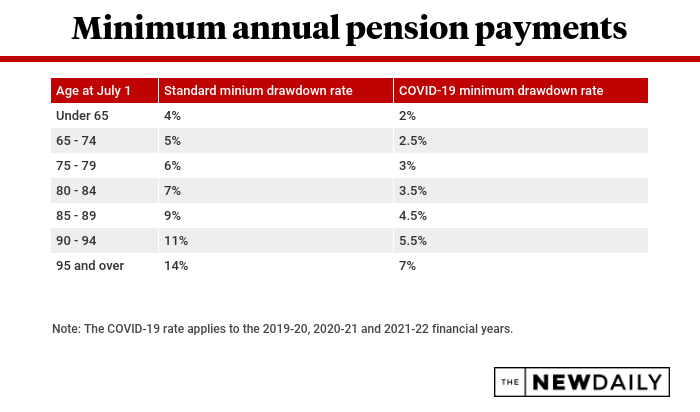 A few other points to consider

Tipping extra money into super will reduce your tax bill. Here’s what you need to know