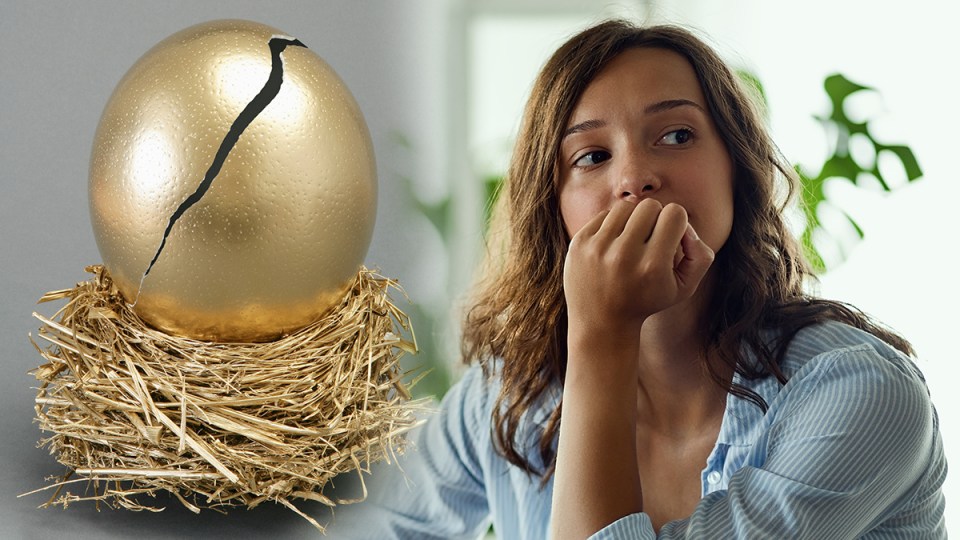 The Morrison government’s early super access scheme has seen 715,000 Australians withdraw the total balance of their retirement accounts and $35.9 billion withdrawn across the nation.

The figures, released by Industry Super Australia, also show that NSW had both the highest dollar value of withdrawals and the highest number of funds being totally drained.

Although in overall figures that would be expected, given NSW is the largest state, its relative position for funds drained topped the other states slightly, while Victoria’s lagged.

Victoria, the second-most populous state with 6.6 million people or 25.7 per cent of the total population, saw withdrawal levels slightly below its relative population numbers.

The state accounted for 24 per cent of accounts emptied and 22 per cent ($7.93 billion) of dollar-value withdrawals. 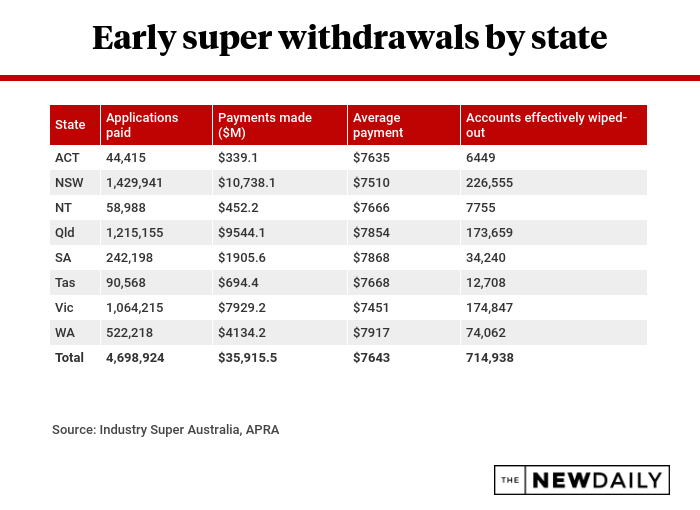 That’s despite the fact that Victoria was hit with a second wave of coronavirus in July, which led to a 16-week lockdown that other states avoided.

By July, when Victoria’s second wave restrictions kicked in, almost $30 billion had been withdrawn under the emergency early release scheme.

By late December, this number had climbed by a relatively small amount to $35.91 billion, meaning withdrawal rates had slowed considerably by the time Victoria’s hard lockdown had started.

The nature of its economy is one of the reasons that NSW has relatively more total withdrawals than Victoria.

“NSW has a longer coastline [than Victoria] so it attracts large numbers of international tourists and is a large international travel hub and these industries were hard hit by the pandemic,” Dr Anthony said.

Withdrawals slowed significantly in the second half of the year because levels of panic eased in the community.

“By the second half, people realised things were basically under control,” Dr Anthony said.

“When people saw their firms were secure and the government was underpinning wages and salaries, they became more confident and super withdrawals slowed.”

Under the scheme, people were able to withdraw up to $20,000 from their funds in two tranches, with applications for the second closing on December 31.

ISA said young people who had accessed all their super under the pandemic measures will have damaged their retirement balances significantly.

“Accessing super early career comes at a steep price to savings. A 30-year-old who withdraws $20,000 could have up to $80,000 less at retirement,” ISA said in a statement.

“There is also a cost to the public purse, as for every $1 taken out by someone in their 30s, the taxpayer contributes up to $2.50 in increased pension costs.”

To help workers make up their eroded savings, ISA said it was vital the legislated increases in the superannuation guarantee – from 9.5 per cent to 12 per cent of wages – go ahead as planned.

“Ditching the legislated increase would heap pressure on the pension and be a cruel blow to those who had to make the tough choice to sacrifice retirement savings to get them through the pandemic downturn,” ISA CEO Bernie Dean said.

ISA said its analysis showed that if the super rate increase was abandoned, the average 30-year-old man who had taken $20,000 from their super would either lose $180,000 from their retirement or be forced to work until 74.

Meanwhile, the average 30-year-old female who had withdrawn $20,000 would need to work an extra eight years or have $150,000 less at retirement.

“Ripping [the super guarantee rise] away from [young workers] would be a cruel double blow,” Mr Dean said.

“It would leave them with far less at retirement and saddle these young workers with a whopping pension bill they pay for through higher taxes.”