Subscribe direct to our news source →
Finance Property Why buyers should think twice before taking out a low-deposit home loan 8:19pm, Mar 18, 2021 Updated: 11:12am, Mar 26

Australians have been warned to consider the ‘what ifs’ before taking on a low-deposit mortgage as buyers swallow more risk to beat the house price surge.

APRA figures released on Tuesday found the value of ‘risky’ new home loans – those with a debt-to-income ratio greater than six – reached $21.55 billion in the three months to December.

That’s 26 per cent higher than in the December quarter of 2019, with those loans now comprising 17 per cent of all new home lending.

Additionally, the percentage of new mortgages taken out with a loan-to-value ratio (LVR) higher than 80 per cent climbed from 39.9 per cent to 42 per cent over that same timeframe – the highest jump in 13 years. 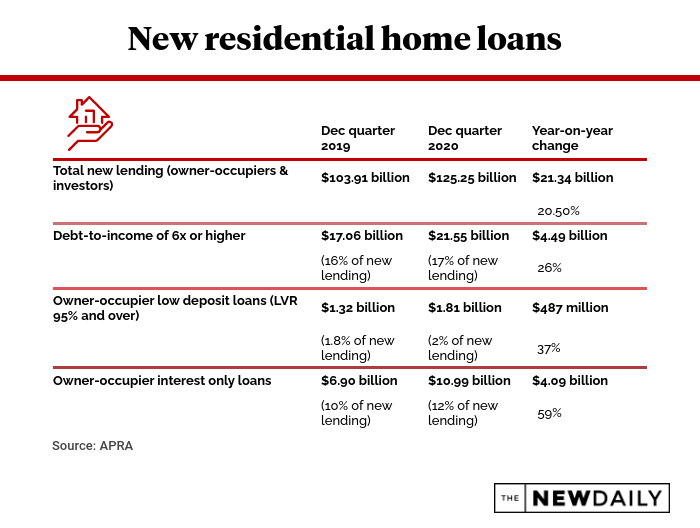 APRA’s figures coincide with a year dominated by low interest rates, first-home buyer incentives, and rising house prices flamed by a fear of missing out (FOMO) and a sense of there is no alternative – known as TINA.

With Westpac forecasting a 20 per cent house price rise over the next two years, buyers will likely extend themselves further on large mortgages to afford their desired homes.

But Ms Tindall said this strategy is fraught with risk. Here’s why.

Beware of the hazards

As a result, they have neglected to factor in the effect of rising interest rates on their cash flow once rates normalise.

For example, a 30-year, $800,000 mortgage with an ongoing interest rate of 2.5 per cent would cost $105 extra per month if rates rose by just 0.25 percentage points, according to Moneysmart’s mortgage calculator.

Although the Reserve Bank has indicated rates will not rise until at least 2024, rate hikes should be front of mind for those owners when factoring in life events like sudden employment changes or pregnancy, he said.

“Unfortunately, a lot of people in this country think you can’t lose money on property in Australia and no one prices in the risk that things could go wrong,” Mr Robertson said.

“We’ve been without a recession for such a period of time and we’ve had great stability in our economy where people haven’t experienced loss or high-interest rates like they had in the early ’90s.”

Ms Tindall said low-deposit mortgagors were also more exposed to the downsides of negative equity, which is where the market value of a property dips below the amount owed on a loan.

Although a steady 30-year trend of rising national house prices has ensured many have swerved that risk – those in Perth have been less fortunate – home owners could land in “mortgage prison” if that trend reversed.

“Even if you don’t sell, you’ll struggle to refinance or restructure your loan if you needed to,” Ms Tindall told The New Daily.

“Against the backdrop of rising prices, that’s less of a concern, but no one can say for sure what’s going to happen in the property market over the next five years – the pandemic proved that.”

Ms Tindall said taking on loans with a deposit lower than 20 per cent of a home’s value, without a guarantor and government incentives, also leaves borrowers having to pay lender’s mortgage insurance (LMI), which can amount to $34,884 for a $760,000 loan on an $800,000 property.

And if a home owner wanted to refinance before accruing 20 per cent of their home’s equity, they would have to pay LMI twice, she said.

Some upsides to buying a home with a low deposit

However, Mr Robertson said there were some benefits to low deposit loans, particularly if prices continued upwards.

For starters, a “forced savings effect” is attached to owning a home that encourages home owners – particularly those with 5 per cent deposits – to penny-pinch.

Mr Robertson said if owners were able to build up enough equity while rates were low, they could then switch to a less risky loan by refinancing, which can lock in lower monthly repayments.

“The trade-off for people on risky loans is they will pay the LMI, but they think the property is going to go up faster than that [cost],” he said.

“But if you are thinking about [a low deposit loan], you need to build up a safety net.

“So that’s where you should then look at income protection, maybe take out home loan insurance with the bank if you can’t make the payments.”

Questions to ask before adopting a low LVR loan