First-home buyers could pay $140,000 more in interest under government scheme

First-home buyers could blow an extra $140,000 on interest payments if they purchase a new property under the First Home Loan Deposit Scheme (FHLDS).

And that’s based on the unlikely assumption that interest rates remain at their current levels for the next 30 years.

Data provided exclusively to The New Daily shows that although the scheme could save first-home buyers tens of thousands of dollars in lenders mortgage insurance (LMI), it could cost them more than that in higher interest payments.

According to calculations by RateCity.com.au, first-home buyers who purchase a home at the new Sydney price cap of $950,000 with a 5 per cent deposit would avoid paying $37,928 in LMI.

That equates to an extra $790 in mortgage repayments every month.

Aspiring home owners in Brisbane would pay an extra $97,092 in higher interest payments and save only $25,950.

RateCity research director Sally Tindall told The New Daily the numbers showed why first-home buyers should think carefully before signing up to the FHLDS.

With the economy in turmoil and house prices tipped to keep falling until mid-2021, Ms Tindall said rushing to buy a home in today’s market with only a 5 per cent deposit was a high-risk strategy with potentially little reward.

“I wouldn’t say all, but many people with a 5 per cent deposit probably don’t have a good track record in savings,” she said.

“But hopefully they’ll be able to manage a sizeable loan, because it’s not for one or two years while rates are low. A home loan is for 30 years and you want to ensure you don’t get in hot water down the track.”

The federal government last week extended the scheme until June 2021 and included an extra 10,000 places, after first-home buyers took up almost all of the 20,000 places previously available.

The scheme allows first-home buyers to buy properties – subject to price caps – with deposits as low as 5 per cent of the purchase price, with the federal government guaranteeing up to 15 per cent of the loan. 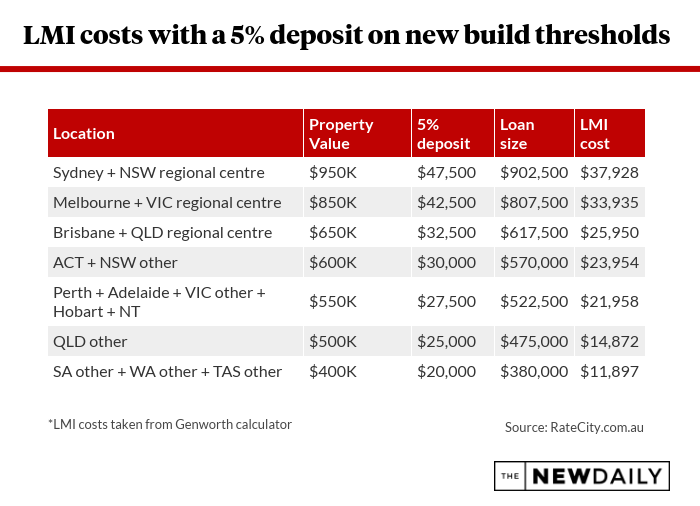 Although the scheme slugs borrowers with much higher interest payments, Ms Tindall said it had a handful of upsides.

By allowing people to get a foot on the property ladder much sooner, the scheme could save buyers money on price, as values often rise during the time it takes someone to save a 20 per cent deposit.

The scheme also stops people paying rent to a landlord.

“If prices go down, you could find yourself very quickly in negative equity, where you’re not in a position to refinance,” she said.

“[So] make a decision for your family for now and in the long term, and don’t get overly swayed by schemes and incentives designed to boost the property market and the construction industry.”

The government has repeatedly talked up the scheme’s intended impact on the economy, with Assistant Treasurer Michael Sukkar telling reporters the grants “not only help first-home buyers but also support the jobs of Australia’s tradies”.

But Curtin University property lecturer J-Han Ho told The New Daily the raised price caps were a “double-edged sword” as although they grant buyers more opportunities, they could encourage them to “overextend”.

“There’s a fear of missing out on purchasing an ideal property when the markets are bad, but the scary thing is a lot of people don’t realise that house prices can go backwards over long periods of time, which is what we saw in Western Australia over the last seven years,” Dr Ho said.

“Although saving on LMI is a good idea now, whether it’s a good or bad decision down the track rests on how long it takes for the negative effects of COVID to properly wash through the economy.”

Coupled with the Coalition’s intention to relax responsible lending laws, the extension of the FHLDS would likely add to Australia’s near-record levels of household debt, Dr Ho said.

He warned the two measures could expose some buyers to the risk of a “margin call” – where banks ask borrowers with smaller deposits to increase payments if prices crash, or risk losing their home.

“Banks have traditionally not done that because bullying Aussie battlers and families is unpalatable,” Dr Ho said.

“But if we continue creating a market where banks lend money to risky customers or those not fully aware on how to manage finances, banks may start giving people 60-day periods to recoup some of their losses.”

First-home buyers could pay $140,000 more in interest under government scheme