The property market has recorded its worst performance in 16 months after national prices fell for a second consecutive month.

And economists have warned that Melbourne’s reinstated lockdown could hurt consumer confidence and deepen the downturn.

CoreLogic’s latest home value index, released on Wednesday, revealed that house prices had fallen 0.7 per cent over June, led by Melbourne (down 1.1 per cent) and Sydney (down 0.8 per cent). 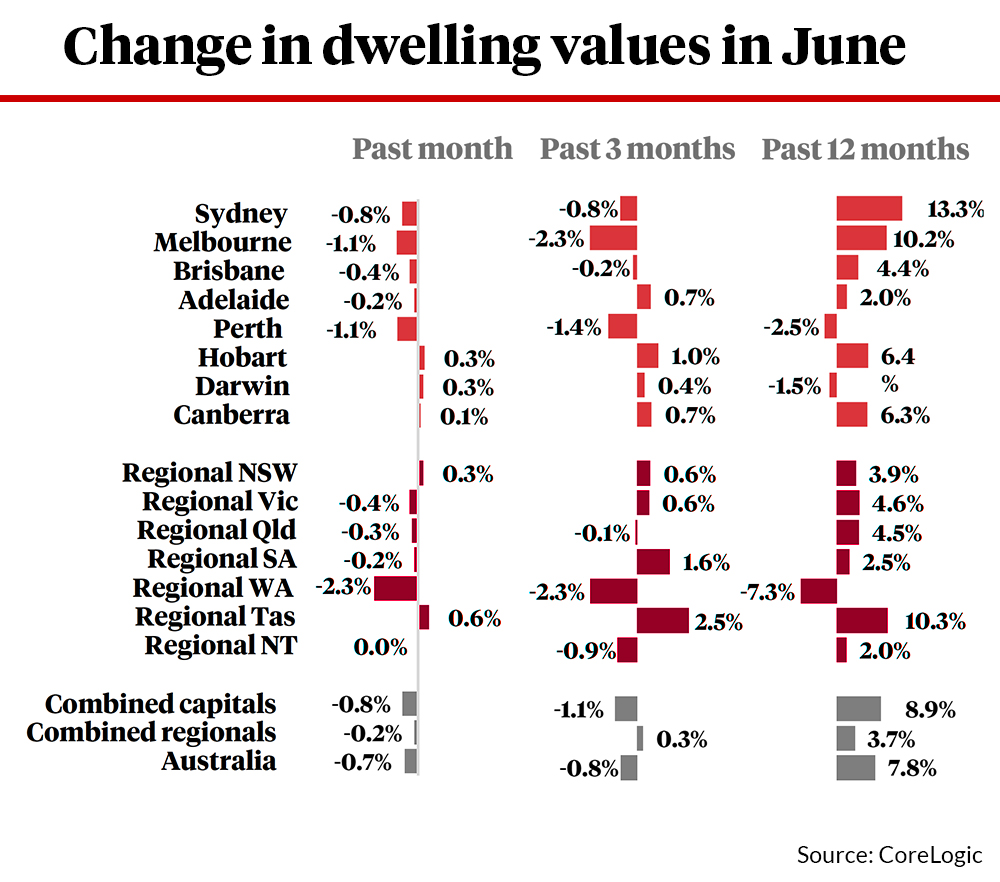 But although clearance rates and listing numbers are rising, Mr Lawless said the sector’s long-term outlook relies on the labour market’s robustness once the stimulus measures are removed.

“Eventually the economy and borrowers will need to abide by market forces – this is when we could see a rise in mortgage arrears and the potential for a lift in urgent or forced sales.” 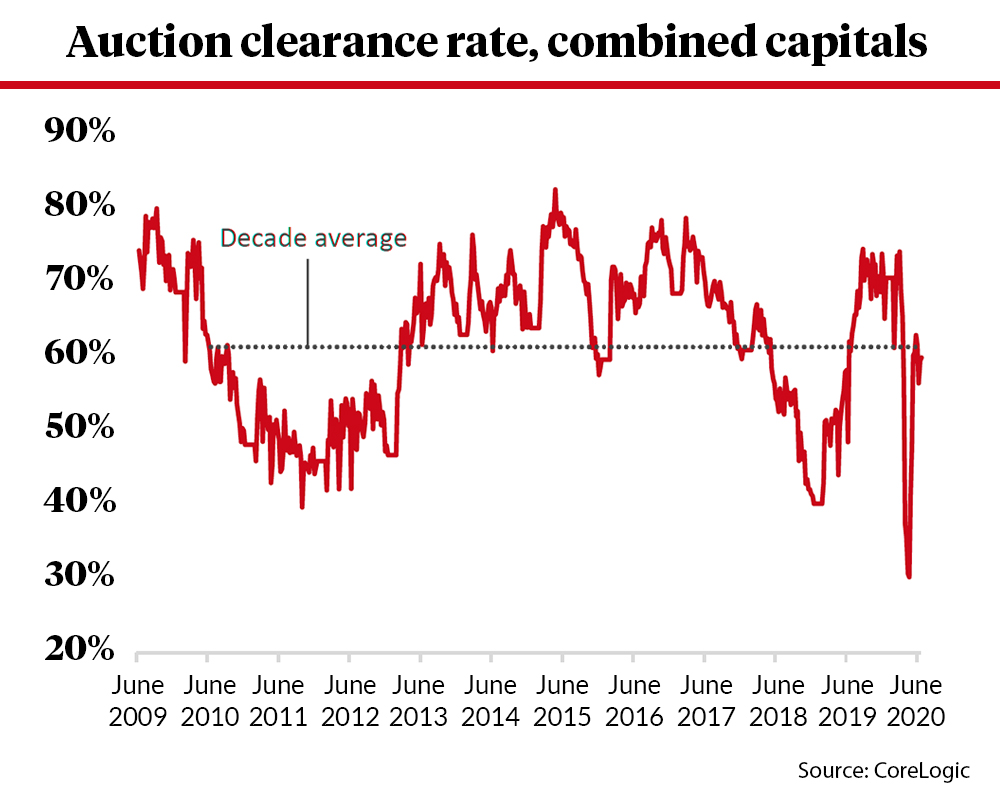 Although high-end suburbs in the inner east (down 3.8 per cent) and inner south (down 3 per cent) led Melbourne’s current falls, CommSec senior economist Ryan Felsman said the partial lockdown presents a major risk.

Affected suburbs will be cordoned off, but fears of further outbreaks in capital cities have the potential to hinder buyers’ confidence more broadly, he said.

“Already, in some of these hotspot suburbs unemployment rates exceed 9 per cent, so it’s going to be a big hit to those regions with businesses again forced to close,” Mr Felsman told The New Daily. 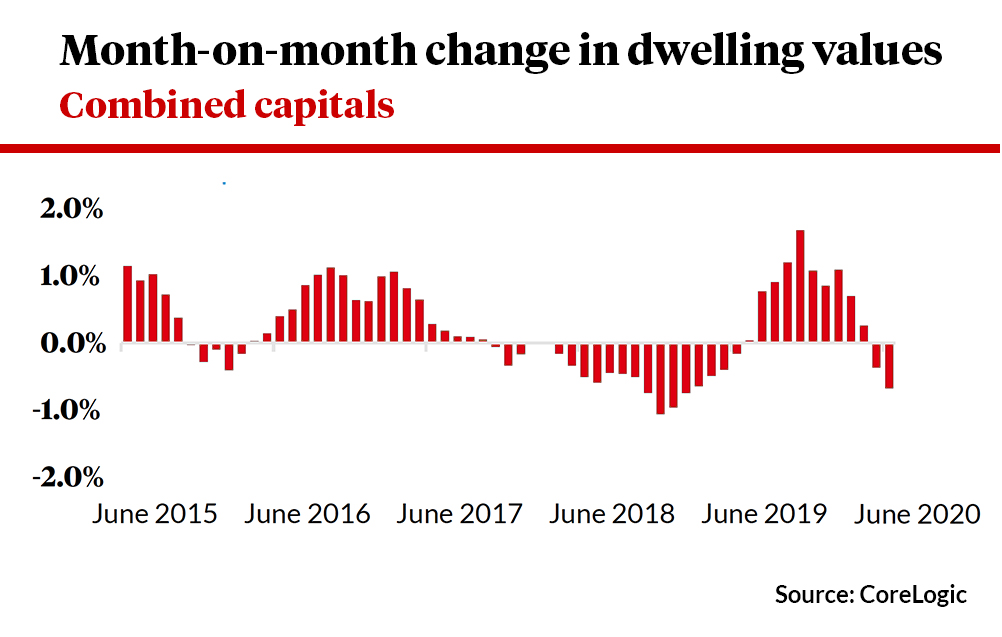 “And activity in those impacted suburbs will be hampered, with open inspections shutting down and auctions moving back online.

“But this could have a flow-on effect to the rest of Melbourne with people inclined to stay put out of self-preservation.”

Mr Lawless told The New Daily the number of confirmed sales and new listings through July will be crucial in assessing how buyers and sellers nationwide respond to the Melbourne lockdown.

Month-on-month transaction numbers across Melbourne increased by more than 25 per cent in May and June, but reduced confidence could erode those figures, he said.

“What we saw during the worst of the lockdown was sales falling by 38 per cent, which took transactional activity in Melbourne – and across most areas of Australia – back to the lowest levels since the last recession,” Mr Lawless said.

It’s a stark reminder if we don’t do the right thing from a policy and behavioural perspective, we could be dealing with a second wave that would prolong the economic downturn and weaken housing activity.”

As with Melbourne, Sydney’s wealthiest suburbs are driving the city’s property downturn.

Pessimistic investors and rock-bottom migration are partly to blame.

As are concerns over negative equity and reduced white-collar appetite to take on a mortgage, Mr Felsman said.

But other demographics have found a silver lining.

First-home buyers are continuing to make inroads as investors shy away, according to recent ABS data.

“If we did see a similar outbreak in Sydney’s suburbs, we could see the potential for a more aggressive downward move in home prices,” Mr Felsman said.

“That said, smaller markets have remained surprisingly resilient, and perhaps investors will begin looking towards those safe havens, especially as those states’ borders continue to reopen.”