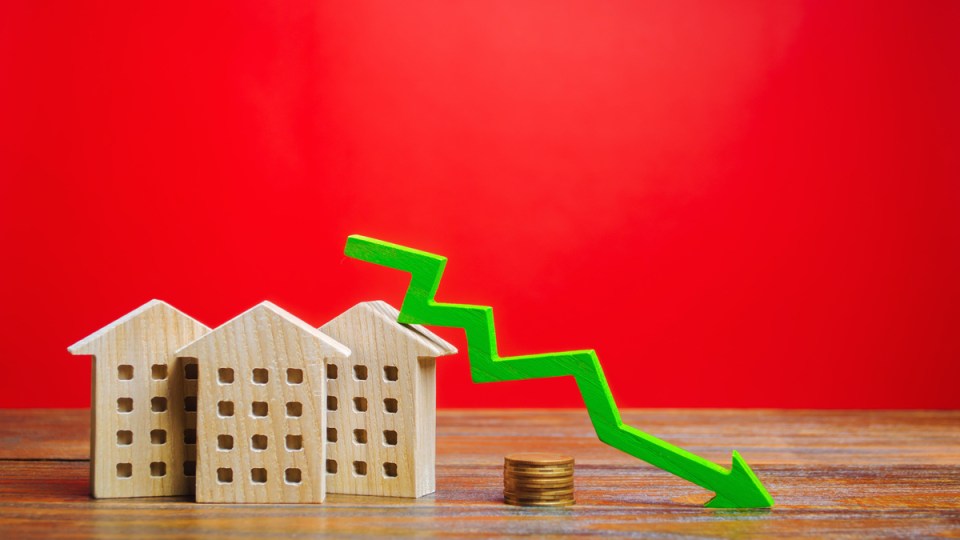 Property prices could fall 30 per cent if the virus is not contained soon. Photo: Getty

Another day, another grim forecast for the property market.

SQM Research chief executive Louis Christopher has described the coronavirus pandemic has an economic “tsunami” that could slash property prices by up to 30 per cent.

Such an outcome is based on Mr Christopher’s worst-case scenario, where Australia either experiences a second wave of infections after restrictions are lifted, or its new case count never reaches zero.

His best-case scenario, on the other hand, sees national property prices dropping by no more than 1 per cent over the year – and perhaps rising by as much as 3 per cent – if New South Wales, Victoria and Queensland start to report no new cases by the end of April.

(Other economists have tipped falls of 5 to 20 per cent.)

Why 30 per cent falls are ‘on the cards’

In 1919, Australia experienced a second wave of Spanish Flu when governments eased restrictions after a drop in hospital admissions, but before new cases had dropped to zero.

A similar scenario this time around would lead to more deaths and encourage governments to keep restrictions in place for more than six months, which would have a devastating impact on the economy.

“Many businesses, including those that are currently on life-support, would not last the distance and will be liquidated,” Mr Christopher writes in his report.

Should the restrictions stay in place for longer than six months, then the roughly $200 billion of economic stimulus announced by state and territory governments would not be enough to keep “much of the sector alive”.

Not least because much of the stimulus comes in the form of tax relief and loans, which are both of little use to companies with zero income. 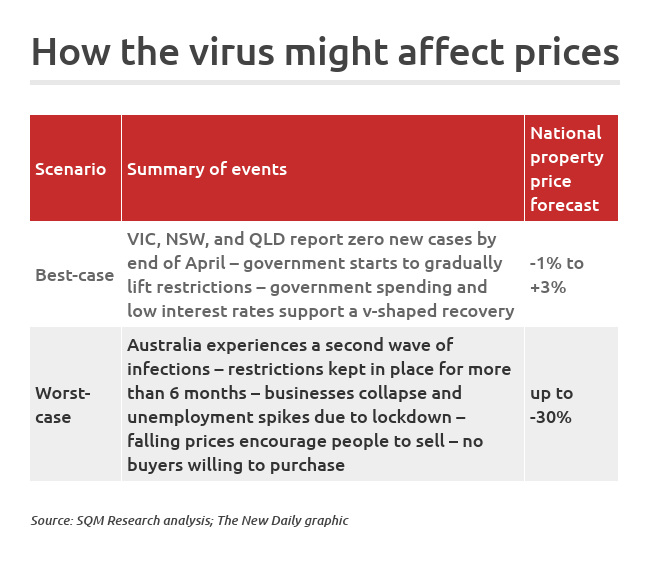 In this scenario, Mr Christopher believes the federal government and RBA would step in to prevent a mass repossession of people’s homes if unemployment spikes and people default on their mortgages.

But even without a wave of forced sales and repossessions, Mr Christopher expects many property owners would want to sell their home to protect their wealth from further price falls.

The problem is, they will struggle to find buyers.

“The buy side of the property equation would be hit very hard, as it is being hit hard now,” Mr Christopher wrote, after noting that anecdotal evidence suggested asking prices had already fallen by 5-10 per cent.

Anyone that is worried they will lose their job or their business won’t be seriously thinking of taking out a home loan to buy into the property market.”

Added to this is the fact Australia’s borders are closed to most non-residents and will likely remain closed for quite some time – meaning “underlying demand for housing, which has been predominantly driven by net overseas migration, has now stalled”.

Should this grim scenario play out, Mr Christopher said a 30 per cent fall in property prices “would be on the cards”.

Mr Christopher believes the recent flattening of the curve provides cause for optimism, though.

He said it has given him hope that Australia’s three largest states will report no new cases by the end of April.

“If we get to that point, the next question begs how long will restrictions be kept? Potentially some restrictions could be lifted in May,” Mr Christopher wrote.

And my bet is that when restrictions are eventually lifted, they will be lifted in the reverse order that they were placed on to begin with.”

That means the temporary auction ban, which saw clearance rates drop to their lowest level since records began in 2008, could be one of the first restrictions to be lifted – giving the market a major boost.

“If we are able to get back to close to normal business by [the] end of May (I certainly don’t think all restrictions will be lifted by that time), then I think confidence in the housing market is going to return,” Mr Christopher said.

Together with the federal government’s stimulus and the RBA’s rate cuts, the improved buyer confidence would see prices fall over the June quarter and bounce back in the September and December quarters.

In this best-case scenario, Mr Christopher said the annual change in national property prices would range from a fall of 1 per cent to an increase of 3 per cent, while prices in Sydney and Melbourne would increase between 0 and 4 per cent.

Why the coronavirus could slash property prices by 30 per cent