One in five government-owned homes fail to meet minimum standards

Almost one in five homes in the public housing system fails to meet minimum health and safety standards – lacking essential amenities that most households take for granted.

Minimum standards require homes to offer facilities for people to wash themselves and their clothes, to store and prepare food, and to remove sewage.

But, across the country, roughly one in five public housing tenants (19.7 per cent) are renting homes from the government that lack at least one of these basic essentials, or have two or more major structural defects.

And the amount of annual tax subsidies paid to property investors ($11.8 billion) is more than double the amount governments spend on housing and homelessness ($5 billion). 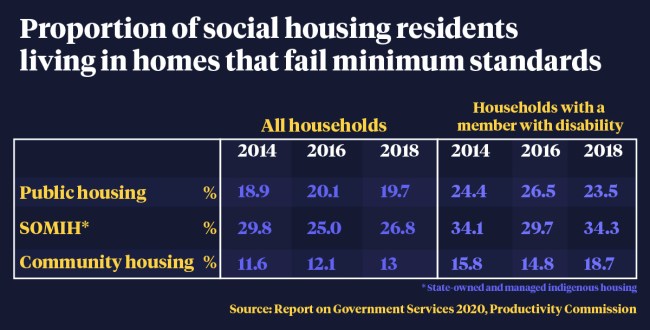 The shocking revelations are one of many unearthed in the Productivity Commission’s annual Report on Government Services.

Conducted by the commission’s steering committee, the report provides “information on the equity, efficiency and effectiveness of government services in Australia” in an attempt to improve public-sector performance.

The first of four data sets was released on Thursday and focuses on community services (aged care, disability, child protection and youth justice) and housing and homelessness.

While it showed national access to public housing had improved, it also found that housing conditions had stagnated over the past five years and unmet needs among the homeless had risen.

But a significant share of this public housing failed to meet basic minimum standards.

Almost one in five (19.7 per cent) public housing residents lived in dwellings of an unacceptable standard in 2018-2019 – demonstrating little progress had been made over the years to improve the quality of Australia’s public housing.

The figures were even worse among residents living in state-owned and managed indigenous housing (SOMIH), where 26.8 per cent of housing failed to meet agreed minimum standards in 2018-2019.

And in the Northern Territory, more than half of people living in this type of housing suffered from overcrowding, too.

This means the majority of Territorians living in SOMIH dwellings need at least one extra bedroom for their homes to meet minimum standards.

The report shows governments have failed to adequately address homelessness, too.

Unmet demand for accommodation services among the homeless has increased 7.9 percentage points since 2014-15.

The latest figures show that 33.8 per cent of “clients with an identified need for services” do not have this need met.

Such a finding will come as little surprise to those working in the homelessness sector.

Countless reports over the years have called for greater investment in public and social housing.

Not just to bring down homelessness, but also to keep a lid on private rents by providing competition at the lower end of the market.

According to one Australian Housing and Urban Research Institute (AHURI) report, governments must build at least 20,000 affordable homes a year to meet the needs of Australia’s very low-income households. 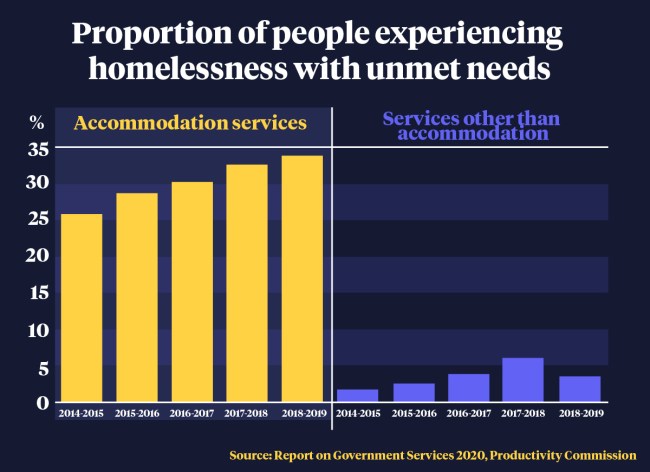 University of Sydney professor Laurence Troy, then at UNSW, previously told The New Daily that failing to address Australia’s affordable housing crisis would have negative repercussions for all Australians.

More people would fall into rental stress, leading to greater division within our communities. And economic growth would slow as people would have less money to spend on other parts of the economy.

Professor Troy estimated in March 2019 that it would cost governments $8.6 billion a year to build more than one million social and affordable homes by 2036.

“To put that into perspective, Australia spends $11.8 billion a year on negative gearing and capital-gains tax subsidies,” he said at the time.

The Productivity Commission’s report shows the government spends $247 billion a year, or roughly 13 per cent of GDP, on the delivery of public services.

Health receives the most funding ($109.2 billion a year), followed by childcare, education and training ($77.3 billion), and community services ($37.1 billion).

The justice system is next in line, receiving $18.4 billion every year.

One in five government-owned homes fail to meet minimum standards