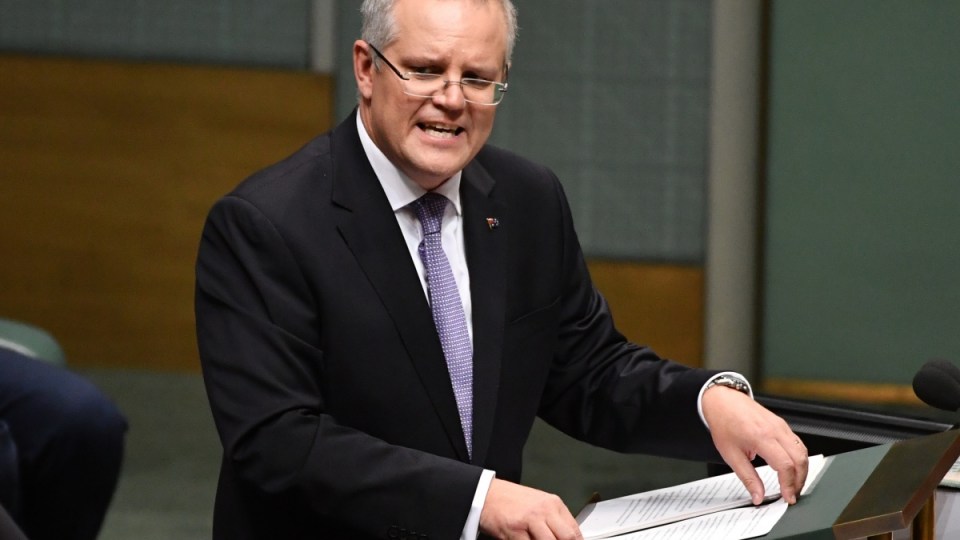 Scott Morrison delivers the 2017 budget in the House of Representatives. Photo: AAP

The Medicare Levy will be increased, Australia’s biggest banks will pay billions of dollars in new fees and Centrelink clients will be drug tested under contentious new measures announced in Treasurer Scott Morrison’s second budget.

While Mr Morrison’s budget makes a big noise about putting Australians back to work and building a more productive economy, it could be years before households benefit from his plans.

With the Turnbull government languishing in the polls, the budget tackles jobs, infrastructure, Medicare and even the big banks in measures that look eerily similar to those offered by the Labor Party.

“There is clearly potential for better days ahead,” Mr Morrison told Parliament as he handed down his second federal budget on Tuesday night.

But the Treasurer was also eager to distance himself from the ideological budgets of recent years.

“This is a practical budget,” Mr Morrison said in Canberra.

“One of the things that I’ve reflected on and the Prime Minister has reflected on is the fact that people’s wages haven’t been growing.

“We need to understand that that makes their sensitivity to the services they rely on and cost of living pressure that much more great.”

Gone are the Abbott-era “disaster” warnings that spending and debt were spiralling out of control. Mr Morrison finally killed off $13 billion worth of ‘zombie measures’, many of them from the horror budget of 2014, and moved the government’s economic agenda towards the political centre.

Under the political cover of the ‘good debt’ mantra, the government promised to spend $75 billion on infrastructure over the next 10 years, including the second Sydney airport; the Melbourne-to-Brisbane inland rail; the Perth Metronet; and yet another ‘business case’ for a train to the Melbourne airport.

Malcolm Turnbull drove a debt truck back in 2009 with the words ‘Labor’s debt bombshell’ emblazoned on the side. Not anymore. The national debt will breach the $500 billion barrier this year and keep growing, which means we’ll pay .94 per cent of national income on interest repayments in 2017-18, up from .91 the year before.

But the Treasurer did not mention this in his budget night speech to the nation.

The budget is still predicted to return to balance in 2020-21, but the 2017-18 deficit will blow out from $26.1 billion to $29.4 billion. This is largely because the government capitulated to Labor by dropping the $13 billion worth of savage Abbott-era cuts to education, health and welfare which had no chance of passing Parliament. Not only is this a big-spending budget, it’s a big-taxing budget. The Treasurer expects to grow revenue from 22 per cent of national income in 2016-17 to 22.8 per cent in 2017-18, a massive increase of $29 billion. That’s not very conservative.

Among the key measures, a 0.5 per cent increase to the Medicare levy – to 2.5 per cent in two years’ time – to fully fund the National Disability Insurance Scheme.

“Yes, it’s an insurance levy on all Australians. But it’s all our responsibility,” Mr Morrison said.

“We all can potentially be a recipient, could’ve been, family members could be. Therefore we all have to bear it. It’s the fair thing to do, it’s the right thing to do.”

Some other sources of this revenue: a new ‘levy’ on Macquarie and the Big Four banks, worth roughly $1.5 billion a year; a crackdown on corporate tax dodgers; and a hope and prayer that a recovering economy will boost corporate and income taxes.

“The banks are going to have to pay more tax,” Mr Morrison said, adding that they “can do more to support the job of budget repair”.

The banks were quick to condemn the move with Australian Bankers’ Association CEO, Ms Anna Bligh, calling it “bad policy”.

“It’s policy on the run and every Australian will have to pay the bill,” she said.

It would cost any Australian who had money in a superannuation account or was on a retirement income linked to the value of banks, Ms Blight said.

The levy won’t cripple Australian banks however, which are among the most profitable in the world. Their return on equity, a common measure of profitability, is 15 per cent, whereas the global average is 9 per cent. They rake in about 2.9 per cent of national income, compared to Canada (2.3), France (1.7), Japan (1.4), USA (1.2) and UK (0.9).

In a move perhaps designed to head off further calls for a Royal Commission into the conduct of banks, Mr Morrison also announced a simpler, one-stop complaints body for all financial services; public naming-and-shaming of executives when their divisions are accused of misconduct; and tougher fines. Mr Morrison also talked up a one-off cash payment to pensioners before June 30, ostensibly to help with winter energy bills: $75 for singles and $125 for couples. What went unmentioned: in its Omnibus Savings Bill, it stripped new recipients of welfare, including pensioners, of Labor’s energy supplement, worth about $370 a year for single pensioners and $550 for couples.

And by announcing the university changes before the budget, Mr Morrison got to skip over the fact it will hike fees by about 8 per cent, and graduates will have to pay back their debts sooner and faster. The repayment threshold will drop from $54,869 to $42,000, hitting nearly 200,000 low-income Australians. It’s effectively a tax: a former student earning $45,000 will pay $675 to the government, when before they paid nothing.

Despite housing affordability being a hot topic, the budget spend on housing will stay frozen at .16 per cent of national income in 2017-18, and then drop.

As promised, first home buyers get a subsidised savings account, taxed on contributions and earnings at 15 per cent. This is a less generous replica of Labor’s first home saver accounts, abolished by Mr Abbott in 2015. Labor also charged only 15 per cent, but the government chipped in a 17 per cent contribution a year on the first $6000. Their maximum balance was $90,000 – the government’s is $30,000.

And the government couldn’t help but touch super. The savings accounts will sit in people’s super funds, rather than in a bank, although savers won’t be able to reduce their super contributions below the usual 9.5 per cent of wages.

It will also erode its reforms to the Howard-era superannuation tax perks, by allowing downsizers aged 65+ to inject $300,000 into their super funds, even if they breach the $1.6 million cap.

Also on housing, investors in affordable rental housing get cheaper loans. Melbourne gets a new suburb for 6000 homes from a release of surplus Defence land at Maribyrnong. A ‘ghost tax’ of at least $5000 a year on foreign property investors who don’t rent out their properties.

But the Treasurer couldn’t stomach Labor’s signature housing policies: substantial cuts to negative gearing and the 50 per cent capital gains discount. His only action was to trim some of the allowable deductions (travel expenses and depreciation) for negative gearers.

Mr Morrison said the government was pursuing a “comprehensive plan”: “It’s not a silver bullet, nor is it intended to be.”

In perhaps its most contentious move, the Government will drug test 5,000 new welfare recipients. Those who test positive will be forced onto a Centrelink income-management scheme, which controls how a recipient spends their money. They will also face referrals for treatment.