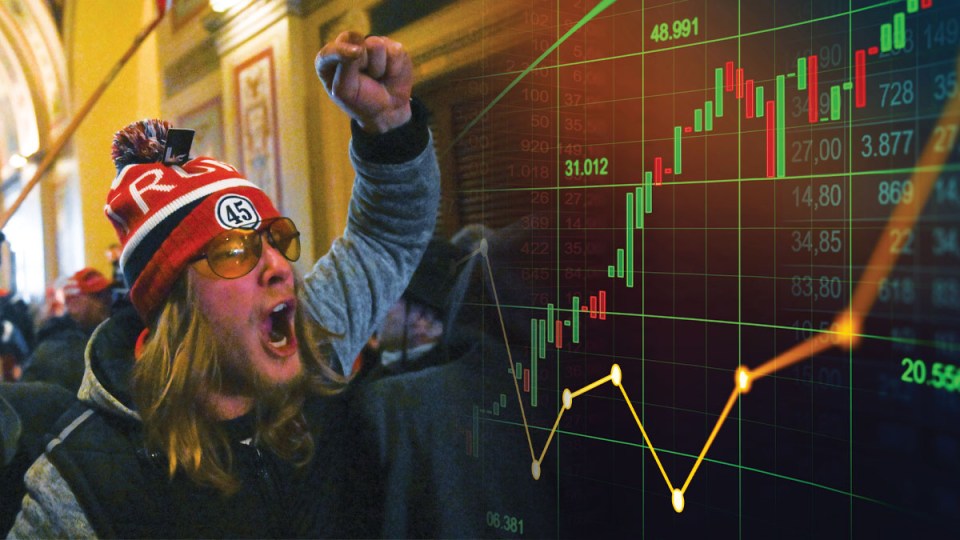 Trump supporters tried to dismantle US democracy. But why did the Australian stockmarket barely notice? Photo: TND

Four people died in the violence. Mr Trump was banned from social media. Democracy was under attack.

But it would be impossible to tell any of that transpired simply by casting an eye over the Australian stockmarket.

Despite the unrest, the ASX 200 kicked off Thursday by jumping up 100 points inside 10 minutes of trading, before settling at 6725 points (or up 1.6 per cent for the day) by market close.

Casual investors, many of whom saw their portfolios climb steadily since a near-40 per cent market plunge, may be a little nervous as this continues a trend of the market acting out of sync with the economic and social upheaval in the pandemic.

But as The New Daily reported in August, a US tech rally, the market’s role as a leading economic indicator and the sheer amounts of fiscal stimulus pumped into economies globally have produced a gulf between reality and investor optimism.

Will things be different following the events in Washington?

Riots unlikely to have much effect on markets

But although the eventual result could lead to greater scrutiny of the technology sector, he said they were still riding the high of legislation passed for $US2000 ($2567) stimulus cheques.

And that bullishness countered the ill-effects of Thursday’s riots, which investors perceive to be short-lived.

“The Democratic victory is bullish for the US economy in the short run, which is why markets are reacting in the way they have,” Mr Bassanese told The New Daily.

Mr Bassanese noted the announcement of a hastened vaccine rollout in Australia also enabled investors to begin discounting the lingering economic effects of the pandemic and improved their six-to-12-month outlook.

“Were it not for vaccines, the market would be in a far weaker position,” he said.

“And the other thing is they have become well aware if weakness does persist, central banks or governments can provide even more stimulus because low inflation around the world is effectively giving them blank cheques to stimulate their economies, almost with impunity.”

What could happen more broadly in 2021?

Mr Bassanese said although markets were due for a pullback between 5 to 10 per cent following their “pretty hard run”, equity markets would likely gain 15 per cent over the next 12 months – with technology, banking and infrastructure stocks leading the field.

Dr Angel Zhong, a senior lecturer in finance at RMIT University, expected the sharemarket to rise between 10 to 20 per cent over the year.

Although, she warned the end of JobKeeper subsidies and the JobSeeker supplement could have implications for shares if GDP took a hit.

While citing the forward-looking nature of investors, she said there were two other factors supporting the market’s continuing growth.

Firstly, the difference in composition between companies listed on the sharemarket and the economy more broadly.

And secondly, the rise of the retail investor through the pandemic.

“The sharemarket is dominated by tech, banks and miners,” Dr Zhong said.

“But our economy consists of public and private companies, and some of those firms you see struggling on the street – such as restaurants – aren’t reflected on the sharemarket.

“And we also saw the rise of mum-and-dad traders, which triggered a warning from ASIC around unsolicited social media investment advice as irrational investors created noise in the sharemarket.”

And those are diverse investing – for beginners, he said a diversified fund is an alternative – and setting clear goals to ensure they are investing in accordance with the level of risk they are willing to take.

“It’s a bit of a conundrum right now that you look to asset prices and you see shares and property are really high, but that doesn’t mean they won’t get higher,” Mr Robertson said.

“But you’ve got to make sure the businesses and companies you invest in that their earnings are still growing.

“And while interest rates are really low, there’s no incentive for people to save, so therefore, consumers are spending and companies are making money.”

The stockmarket continued to rise after the US Capitol riots. Should investors be worried?