The Reserve Bank has lifted the official cash rate by another half a percentage point as it seeks to rein in rising inflation.

The central bank’s fourth rate hike in as many months takes the cash rate to 1.85 per cent – the highest level since May 2016 – and will add another $140 to the monthly repayments on a typical $500,000 mortgage.

Reserve Bank governor Philip Lowe said it was necessary for the bank to lift interest rates to bring annual inflation back into its target range of 2-3 per cent and “to create a more sustainable balance of demand and supply in the Australian economy”.

He said the bank was likely to lift rates even higher over the coming months but noted its decisions would be guided by economic data.

“The size and timing of future interest rate increases will be guided by the incoming data and the Board’s assessment of the outlook for inflation and the labour market,” Dr Lowe said.

“The Board is committed to doing what is necessary to ensure that inflation in Australia returns to target over time.” 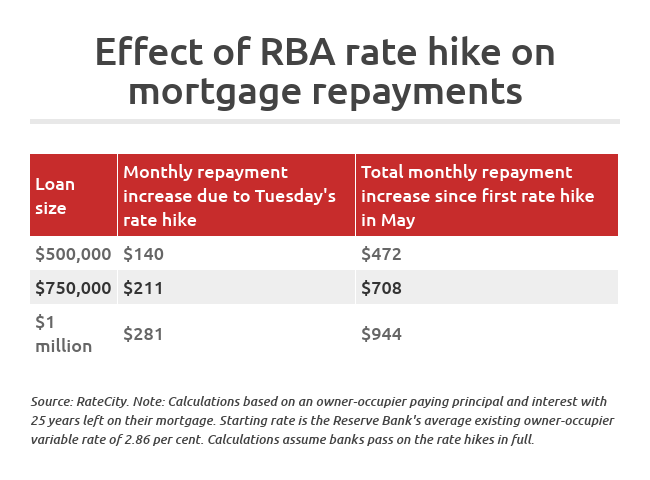 Economists had widely expected the RBA to hike rates by another half a percentage point after annual inflation hit a 21-year high of 6.1 per cent in the June quarter.

The Reserve Bank is hiking rates in the hope that this will encourage households to spend less money and that this will put downward pressure on inflation.

Westpac and ANZ expect the RBA to keep lifting rates until the cash rate hits 3.35 per cent, which means mortgage repayments are likely to keep rising for months to come.

“They have high and rising inflation and falling wages and their interest rates are going up, so clearly there will be an element of frustration in the community about those circumstances,” he said.

In a statement to Parliament last week, the Treasurer also warned Australians that their purchasing power was likely to decline until at least next financial year (2023-2024).

That’s because inflation is expected to be higher than nominal wages growth over the next 12 months.

“The harsh truth is households won’t feel the benefits of higher wages while inflation eats up wage increases, and then some,” Dr Chalmers said on Thursday.

The revised forecasts from Treasury predict real wages will fall by 1.75 per cent this financial year (2022-2023), as nominal wages grow by 3.75 per cent and inflation rises by 5.5 per cent.