Gas companies making billions of dollars in windfall profits by exporting Australian gas overseas could soon be reined in by the federal government.

Resources Minister Madeleine King said on Monday the government will decide by “early October” whether to trigger laws enabling it to force gas producers to direct gas earmarked for export to local markets instead.

The move came on the heels of a scathing consumer watchdog report about the gas market, which warned about a worsening energy shortage because producers are chasing higher profits overseas and exporting too much gas.

The report forecast a 56 petajoule (PJ) east coast gas shortfall in 2023 – equal to about 14 container ships’ worth – a massive increase from the 2/PJ shortfall that was identified this time last year.

“The outlook for the east coast gas market has significantly worsened,” Australian Competition and Consumer Commission (ACCC) chair Gina Cass-Gottlieb said in a statement on Monday.

“To protect energy security on the east coast we are recommending the Resources Minister initiate the first step of the Australian Domestic Gas Security Mechanism (ADGSM).”

They called for a crackdown on producers charging international gas prices to local customers.

The federal government unveiled a three-pronged strategy in response to the ACCC report on Monday, flagging an overhaul of market rules and a new agreement with the gas industry.

But despite growing pressure, Ms King stopped short of promising to trigger the ADGSM, which would force producers to ensure local demand is met before they ship spare gas overseas.

Instead, the government will take the first step towards doing so under rules set by the former Coalition government, requiring consultation with the gas industry and other interest groups.

Ms King said the government will have to decide by early October whether to enact the legislation from next year.

“[The ACCC report] is an important early warning to us all about the potential problems we will face if we don’t take action now,” Ms King said, adding later that the findings were “damning”.

Ms King also flagged an overhaul of the gas trigger itself, complaining that the rules take too long to implement and have thus been ineffective in dealing with the current gas market crisis.

Ms King said the changes would be guided by seven principles, including the requirement that enough gas be supplied to the local market and that Australia meets its new emissions targets.

Not ‘seriously engaging’ with rules

Finally, Labor has started negotiating with gas producers about a new industry agreement that would outline expectations for supplying the local market and the prices companies can charge.

Under a current agreement that’s about to expire, gas producers can offer excess supplies to the local market on an expression of interest process and charge international market prices.

But the ACCC fears that gas companies aren’t “seriously engaging” with this existing process, while some experts take issue with local users being forced to pay overseas prices for gas that comes from Australia.

“We shouldn’t be paying international prices. We should benefit from our own reserves.”

Professor Liebman said Labor’s reforms are a “positive step” but noted that without a pledge to trigger the ADGSM or create a new reservation policy the effect of their reforms remains uncertain.

In its report, the ACCC said the issue of producers selling overseas at the expense of local users has been getting worse, with more supply being earmarked for export since 2021.

Ms Cass-Gottlieb said up to 70 per cent of excess supply has gone overseas in recent years, with exporters withdrawing more gas from the local market than they have put in since last year.

“The volume of gas withdrawn by LNG producers is increasing and is estimated to reach 57.6/PJ of gas from the domestic market in 2023,” the ACCC said in its report. 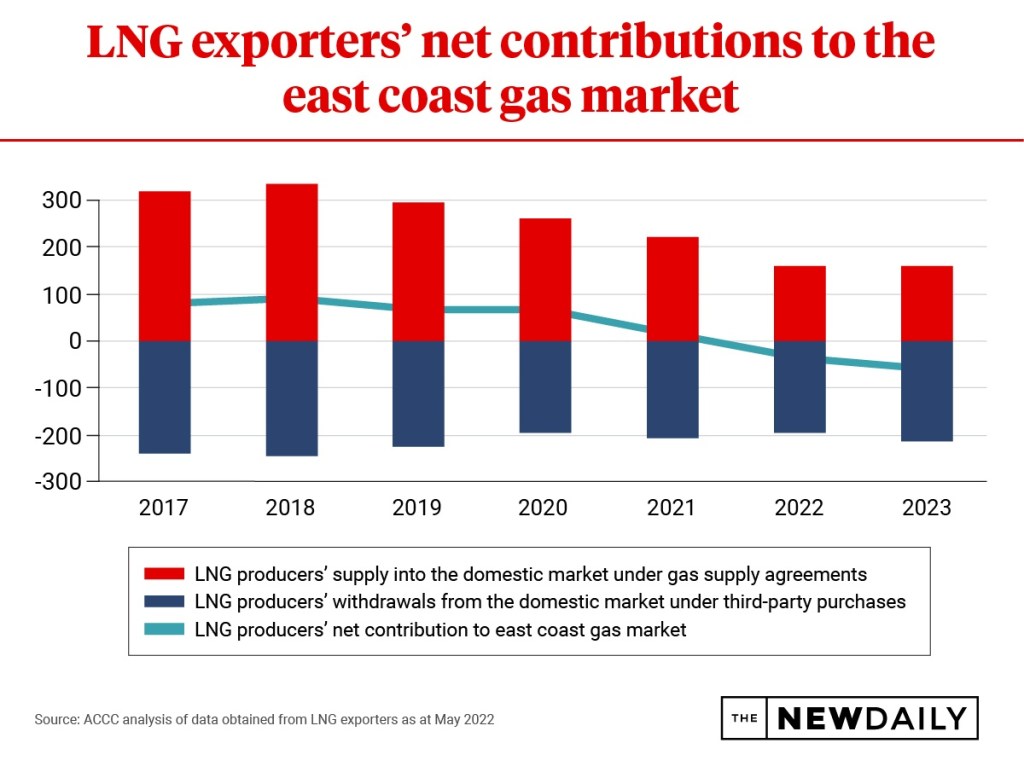 Victoria University’s Professor Bruce Mountain said an additional fear is that international prices are increasingly expanding from the spot market to the local contract market used largely by retailers and power stations.

These are the agreements that play the largest role in setting household energy bills, he said.

“The fear is this spot pricing thing will start to be reflected more clearly in [local] contracts.”

Household energy bills have already risen sharply this year, with regulators warning on Friday that wholesale power costs have spiked as the grid increasingly relies on pricey gas power.

Experts said that the ACCC’s report shows households will face even higher energy bills next year unless producers begin reserving more of their excess supply for the local market.

Tim Buckley, senior energy analyst at Climate Energy Finance, accused gas giants of profiting from the war in Ukraine – which sparked a global gas shortage – at the expense of local households.

He said Australia doesn’t have a gas shortage, it just exports too much.

“The absence of any effective price or volume regulations over multinational use of Australia’s public resources means the domestic market is held to ransom,” he said.

“The gas cartel has manufactured an east Australia energy crisis, all while they are war profiteering.”

He added that taxpayers have also “foregone income” by subsidising gas developments and taxing the industry very lightly.

“With gas being so expensive, and likely to be for a good while yet, the decision making for producers is very clear,” Professor Mountain said.

“They want to sell abroad.”