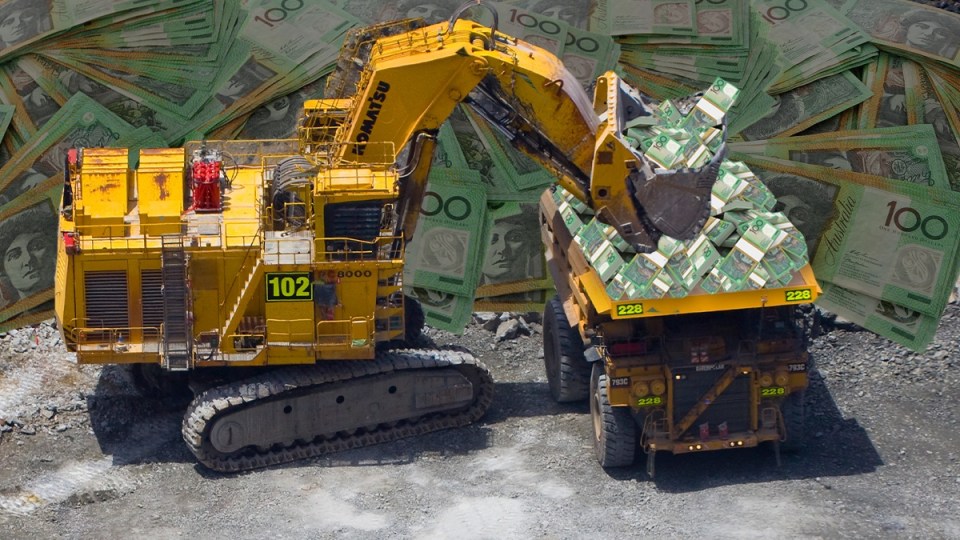 Australia’s mining giants are set to cash in as the war in Ukraine drives a massive rise in commodity prices, but don’t expect much of the windfall to be invested back into the economy.

Instead, shareholders are shaping up as the big winners, with mining giants likely to save their newfound super profits, according to Reserve Bank boss Philip Lowe and several leading economists.

Meanwhile, Prime Minister Scott Morrison is resisting calls to ease fuel taxes for households as the war pushes petrol prices past record highs – despite the government granting billions of dollars in tax breaks to miners.

It’s reigniting debate about whether mining companies are paying their fair share of tax in Australia, particularly with taxpayers facing a series of new budget headaches, from COVID debts to natural disaster clean-ups.

Richard Denniss, chief economist at left-leaning think tank The Australia Institute, says the mining sector is profiting from the higher prices created by the war while paying too little tax.

“If we had a windfall gains tax, these windfall profits could be invested either back into helping Australians cope with higher prices, or investing in electric vehicles.”

Those windfall profits are set to be immense – commodity prices have soared over the past week as the war in Ukraine has escalated.

Iron prices have also risen back above US$150 ($204) a tonne – up 10 per cent so far in March – which has less to do with the war and more to do with expectations of higher demand from China.

Nevertheless, it all equals a massive pay day for Australia’s mining industry, which has already cashed in on higher coal and iron prices over the past year.

Mining giant BHP reported a whopping $9.4 billion profit over the last six months of 2021, while Rio Tinto posted a $21 billion profit for the 2021 year, according to public company reports.

The companies are now paying more than $20 billion in dividends to investors between them – and those numbers are expected to rise further on the back of the war in Ukraine.

But economists don’t think the windfall will be invested back into the Australian economy.

Asked on Wednesday about this, Dr Lowe said although miners would be one of the big beneficiaries of the war, they were unlikely to invest the bumper profits and would instead save them.

“It’s unlikely that resource companies are going to go ahead and invest a lot at the moment because of the higher commodity prices,” he said.

“We’re expecting a lot of this extra national income to be saved this time, because resource companies aren’t going to invest a lot.”

This is because such investment is “massive and very expensive” and therefore determined by medium-to-long-term price and demand forecasts – not short-term changes.

But he said the broader economy would benefit in a few ways from the higher commodity prices, with the federal budget set to be a key winner in the form of higher tax revenue.

And because the value of mining exports has risen, the Australian dollar is rising against other currencies, making imports like petrol cheaper.

“A stronger dollar offsets some of the petrol impacts,” Dr Hamilton said.

But households won’t see much benefit overall and will still notice the effects of the war at the petrol bowser, Dr Lowe said on Wednesday.

“Households aren’t going to feel the benefit of this higher national income,” he said.

“What they’re going to feel is higher petrol prices, so they’re not likely to increase spending.”

Some motorists are now paying $2 a litre to fill their tanks amid a rise in petrol prices that began at the start of the year and has since worsened as the war in Ukraine sent global oil prices skyrocketing.

The squeeze is igniting calls for a cut in federal fuel taxes, with Senator Rex Patrick saying the rate should be halved to 22 cents per litre.

Mr Morrison has knocked back the suggestion, but earlier this week Treasurer Josh Frydenberg left the door open to such a move by declining to speculate on what would be in the budget.

Experts at the Australia Institute have said the tax could be cut for households without harming the federal budget if the government ended the billions of dollars in fuel tax breaks it gives to the mining industry.

As TND reported last month, the mining industry claims several billion dollars’ worth of fuel tax credits each year as part of a system that has been heavily criticised by experts.

“The reason we give a fuel credit to mining companies is not because we love mining or want to subsidise the mining industry,” Dr Hamilton said.

“It’s because they don’t use the roads.”

“Ideally, if a tax is designed well, you don’t lose any mining investment.”

But they said mining and carbon taxes would be difficult to implement politically, following earlier opposition from the Coalition.

“It’s taken a lot of political effort and will to collect so little tax,” Dr Denniss said.

“This didn’t happen by accident, it’s not an unintended consequence, it’s Australian policy.”

Correction March 24: An earlier version of this article stated the budget office costings for a mining super profits tax would generate $118 billion over a 20-year period. The correct time period is actually nine years.

Should miners pay more tax? The war in Ukraine has delivered a massive windfall