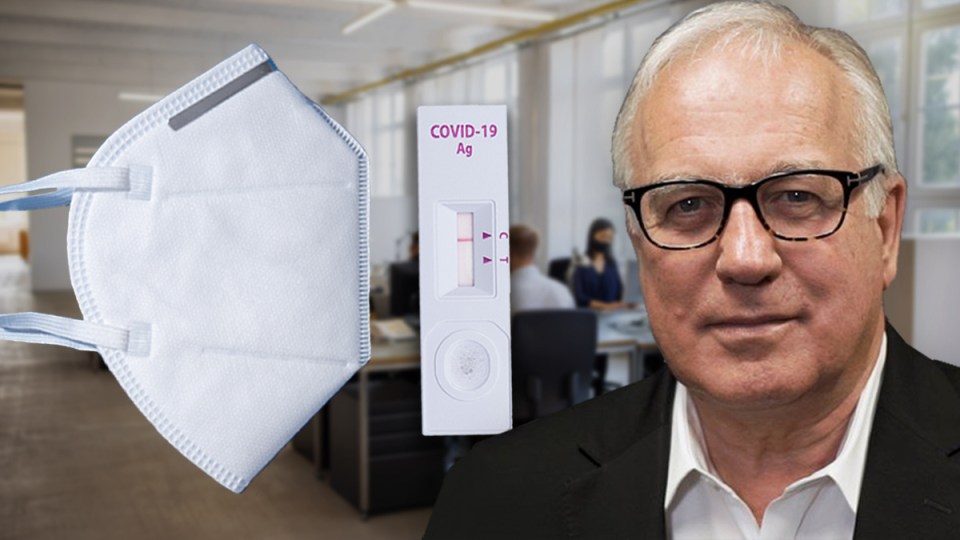 Australian governments are pretending the only defence against COVID deaths is more lockdowns. They're wrong, writes Alan Kohler.
opinion

Australian governments are behaving as if the only alternative to allowing 80 people a day to die from COVID-19 is another bout of hard lockdowns.

And since lockdowns have been abolished, that means it’s tough luck for the dying.

There can be no more lockdowns because the Morrison government decided to leave lockdown losers to their fate: The hardship of the few to protect the health of the many is too great.

But lockdowns are not the only alternative to letting the virus rip and having a health system in crisis.

The other three ways of preventing the spread of a virus are good masks, good ventilation and plenty of testing.

They’re less effective than hard lockdowns, it’s true, but better than giving up.

Last week the Biden administration began distributing 400 million free N95 masks – the most effective ones – around the United States.

In Australia, we have to buy them ourselves.

In a press release this week headed “We urgently need better masks”, the network of experts known as OzSAGE said: “Australia is an outlier in not yet recommending or providing high-quality face coverings.”

There’s not even a coherent national policy about wearing any kind of masks, let alone providing the most effective N95 ones for free.

The whole issue of masks is left to states and individual businesses and event organisers to enforce them, and most people wear the cheap blue ones that let you breathe more easily but also let the virus through.

Surely the first cheap, easy way to avoid lockdowns and death would be to provide free N95 masks to everyone like the US is doing and mandate their use.

But no – the Morrison government is too busy getting out of the way.

On ventilation, last year we wrote here that good ventilation should be enforced and subsidised in all enclosed public spaces as part of the national strategy for dealing with Delta.

Nothing has happened apart from the Victorian government providing air purifiers to schools with some policy wording that says: “Ventilation is an important strategy in reducing the risk of aerosol transmission”.

But nothing has been done. Specifically, the federal government is entirely missing on the subject of a national ventilation and air purification strategy.

There should have been one in place 18 months ago that involved ensuring businesses and event organisers could get air purifiers and helping them pay for them, along with free masks.

But the government has been too busy getting out of the way.

And of course tests should be free, both PCRs and RATs. It is incomprehensibly penny-pinching that we are forced to buy RAT tests ourselves, if we can find them.

Maybe this is why governments and the media are largely averting their eyes from the Omicron death toll: The abolition of lockdowns and the failure/refusal to do any of the alternatives means that they think nothing can be done about all the people dying so best to ignore it.

Record deaths but nothing doing

Whatever the reason, something weird is going on this year.

In August 2020, national cases peaked at 550 a day, the number of people in hospital at 680 and the seven-day average of deaths peaked at 22 a day in early September.

Those first and second waves of COVID cases and deaths brought forth a grim national fighting spirit of gruelling press conferences, hard lockdowns, closed borders in or out, and a hose of unaccountable fiscal support for those affected.

The number of people in hospital is holding steady about 5000 and 155 people died on January 28, when we were all glued to the box watching Rafael Nadal and Daniil Medvedev win their semi-finals.

The seven-day rolling average of deaths from COVID is still above 80 per day – four times what it was during the crisis of 2020.

Imagine if there were two buses crashing every day, all souls lost, or an aircraft coming down with 80 people on board, every day. There would be pandemonium.

But we’re living – and dying – with COVID, because … well, because the only alternative is more home schooling, lockdowns and closed borders, isn’t it?

Alan Kohler: ‘No lockdowns’ doesn’t have to mean death stalks the land