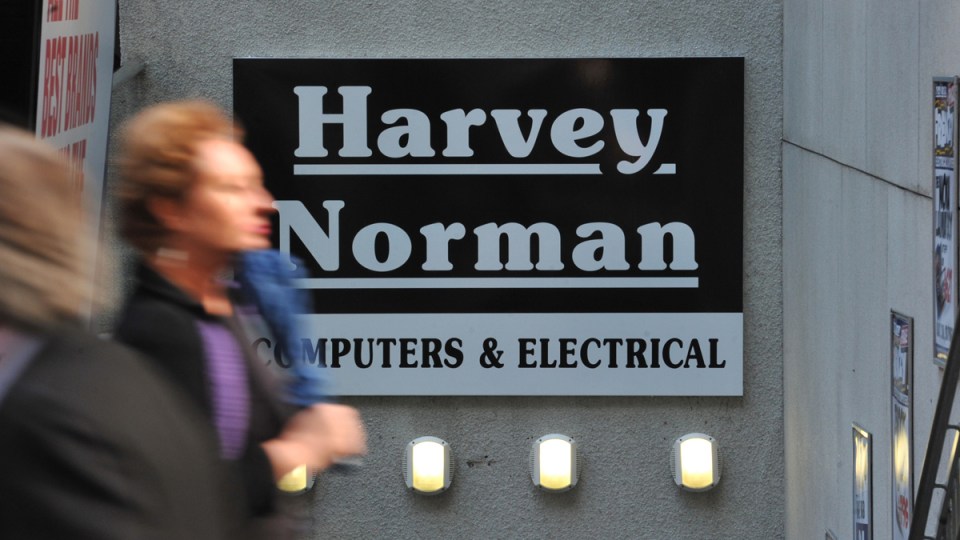 After months of public protests, Harvey Norman has repaid part of its JobKeeper windfall. Photo: AAP

Harvey Norman has bowed to public pressure and repaid $6.03 million in JobKeeper after its annual profits soared by 75 per cent in 2020-21.

The household goods retailer said on Tuesday that it had repaid wage subsidies handed to its head office staff during 2020, months after its chair and billionaire co-founder Gerry Harvey refused to pay it back.

But the money is just a small slice of the government support received by stores trading under the Harvey Norman brand: About $14.4 million in JobKeeper paid to Harvey Norman franchisees last year has still not been returned.

Taxpayers in New Zealand, Malaysia, Singapore, Ireland, Slovenia and Croatia are also still more than $20 million out of pocket after supporting the retailer’s overseas operations during the pandemic.

The retail giant has been in public retreat for months after Mr Harvey sparked public outrage by refusing to return JobKeeper despite booking huge profits and paying massive dividends.

The retailer deleted its Twitter profile in May after unions staged protests outside stores in relation to its taxpayer-fuelled profits.

And the tills kept ringing over the six months to June, as Harvey Norman road the wave of Australia’s world-leading economic recovery until the devastating third wave of the coronavirus.

Harvey Norman booked an $841 million after-tax profit on Tuesday, up 75 per cent for the 2020-21 year on the back of strong trading results.

Sales rose by double digits across its franchised and company stores.

The retailer promptly unveiled a $186 million dividend for its investors, adding to the $548 million in payments already doled out to shareholders since April last year.

“Harvey Norman has given us the best advertisement for more transparency into the secretive, rorted JobKeeper scheme,” he said.

Harvey Norman’s decision to repay the JobKeeper payments given to its head office but not those handed out to its franchisees mirrors that of Domino’s Pizza, which handed back just $700,000 paid to its printing business last year.

As TND previously reported, dozens of other public companies have repaid some but not all of their JobKeeper payments, including Nick Scali, Rebel owner Super Retail Group and homeware company Adairs.

The repayment is a backflip for Mr Harvey, who had earlier refused to repay JobKeeper after claiming the business would repay the money in tax, which is a legal requirement that exists irrespective of the government support scheme.

Mr Harvey first sparked public outrage early last year when he referred to the pandemic as a business opportunity, before later saying he regretted those comments in an interview with the Nine Newspapers.

Harvey Norman is among more than 60 other publicly-listed firms that reported large profits or investor payouts after taking JobKeeper, as The New Daily reported in March.

On Monday, budget office analysis revealed more than $13 billion in JobKeeper was paid to about 200,000 companies that actually saw their turnover rise after signing up to the program last April.

As TND reported yesterday, that money is enough to purchase more than 400 million doses of the Pfizer vaccine.

Despite this, Treasurer Josh Frydenberg and business groups continue to resist calls to publish a list of the large companies that received JobKeeper.

The Senate is attempting to order the Australian Tax Office (ATO) to reveal the companies that took payments, but Mr Frydenberg threw a spanner into the works by making a public interest immunity claim.

Mr Frydenberg and the ATO fear handing over the files will undermine confidence in the tax system and adversely affect businesses involved.