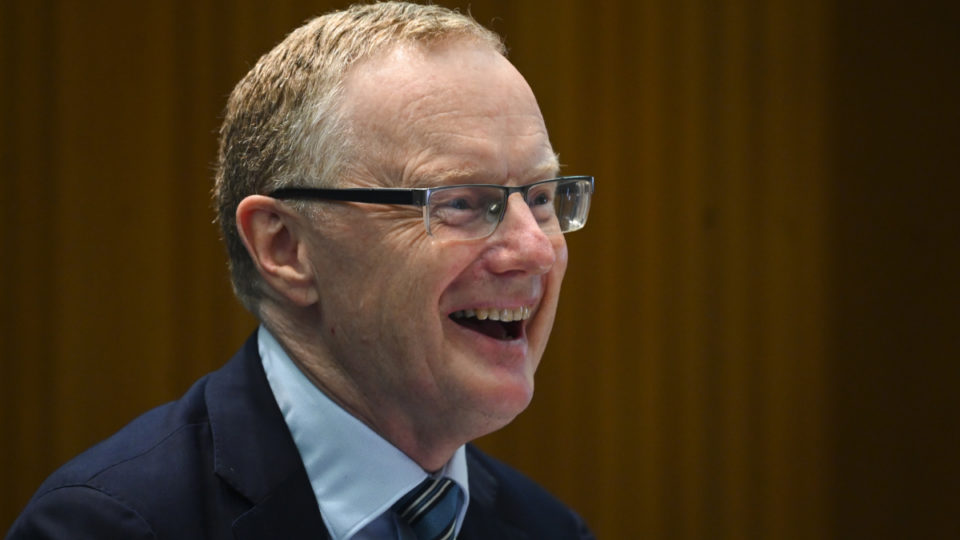 RBA governor Philip Lowe says the bank is certainly not hinting at a rate rise in 2023. Photo: AAP

Reserve Bank governor Philip Lowe is prepared to continue pumping out cheap money longer than other nations, declaring he’s “waiting for evidence” that inflation is picking up before tightening his policy belt.

In a media conference call on Tuesday evening, Dr Lowe also said Australia’s vaccine rollout was “slow” and the RBA was “considering” possible interventions to slow down the housing market.

Although the central bank is busy upgrading its forecasts amid a stronger-than-expected economic recovery, Dr Lowe defied his critics and stood firm on a plan to retain rock-bottom interest rates until annual inflation is back within the RBA’s target range of 2 to 3 per cent.

In March, core inflation printed at just 1.1 per cent.

Dr Lowe said the RBA would keep buying government bonds (printing money) until there was evidence that inflation and wages growth were starting to pick up.

“We want to see results before we change interest rates,” Dr Lowe said.

“We’re certainly not hinting at rate increases in 2023,” he added later.

“Because the inflation and wage outcomes have been lower in Australia than other places, we’re going to keep the stimulus going probably longer than the other countries [including New Zealand and Canada].”

In what was the most comprehensive update on the RBA’s thinking around Australia’s COVID-19 recovery since January, Dr Lowe said the vaccine rollout was “slow” and predicted the international border would partially open within a year.

He acknowledged people were upset about the vaccine rollout as a result of lockdowns in Melbourne, Sydney, Brisbane, Perth and Darwin in June.

“The closure of the borders and the slow rollout of the vaccine is affecting people at a very personal level.

“It’s also affecting businesses … but I do think we also need to remember that we will get through this and we need to be patient.

“By the end of the year, within six months, most of us will be vaccinated, our lives will start to return to normal, we’ll be able to travel again and businesses will be able to do the things they need to do.”

Dr Lowe said the reopening of the international border would be “good news” for the economy, even though the current restrictions made higher wages growth more likely.

“We’re working under the assumption that some time over the next year the borders will be gradually opened, particularly for workers who have skills that are in short supply,” Dr Lowe said.

The governor’s speech came hours after the RBA board decided to pare back purchases of Australian government bonds from $5 billion a week to $4 billion from early September until at least mid-November.

The RBA also kept the official cash rate at 0.1 per cent and held firm on its forecast that the conditions for a rate hike (inflation sustained in the target band and therefore wages growth above 3 per cent) would not occur until 2024, defying growing calls for a tightening of monetary policy among economists over the past month.

Economists had said a stronger-than-expected labour market recovery would prompt the RBA to raise rates above 0.1 per cent in 2023, not 2024.

But Dr Lowe said “it doesn’t seem particularly likely” that this will happen.

“For the cash rate guidance … to fundamentally shift from 2024 to 2023 we would need to see strong, unequivocal evidence that the pickup in the economy is translating into wages growth and inflation more quickly than we had expected,” Dr Lowe said.

“There are these really fundamental factors that have kept wages growth low for a decade, so we would need to be convinced that those factors have gone away and been replaced by a new set of factors.”

Dr Lowe also said the RBA would stop buying government bonds before the cash rate is increased from its current record low, but that it would continue to do so until there was evidence of wages growth and inflation picking up.

By the end of November, the RBA will have purchased $237 billion worth of federal, state and territory bonds and will hold a little more than 30 per cent of all Australian government bonds on issue.

“The economy has surprised massively on the upside, but the wage and inflation outcomes have been pretty much in line with our expectations,” he said.

“We’ve not yet seen evidence that the stronger economy is translating into stronger prices and wage pressures.”

The stimulatory policy settings are helping to drive down unemployment, which fell to 5.1 per cent in May, but Dr Lowe does not believe wages growth will start picking up until the jobless rate is sustainably within the low 4 per cent range.

Meanwhile, all the RBA’s cheap money has put a rocket under house prices, which have risen by more than 10 per cent across the major capital cities in 2021.

Dr Lowe acknowledged this in his speech but said the RBA does not believe lending standards have fallen to a point requiring intervention from regulators.

Though the governor did outline the conditions for such an intervention on Tuesday.

“What neither APRA or the Reserve Bank want to see is credit growing too quickly relative to people’s incomes,” Dr Lowe said.

“It’s not in the country’s long-term interests to have debt increasing at a much higher rate than people’s income.

“If we saw a large and sustained gap in household credit growth relative to income growth then we would be looking at various policy responses.”

He said the RBA and APRA were “considering” at interest serviceability buffers – the cushion that banks have to add onto the interest rates they charge on home loans when assessing an applicant’s creditworthiness – and several other potential interventions.

“I don’t see a need to move on any of those areas at the moment … we’re watching very carefully the trends in household debt. “