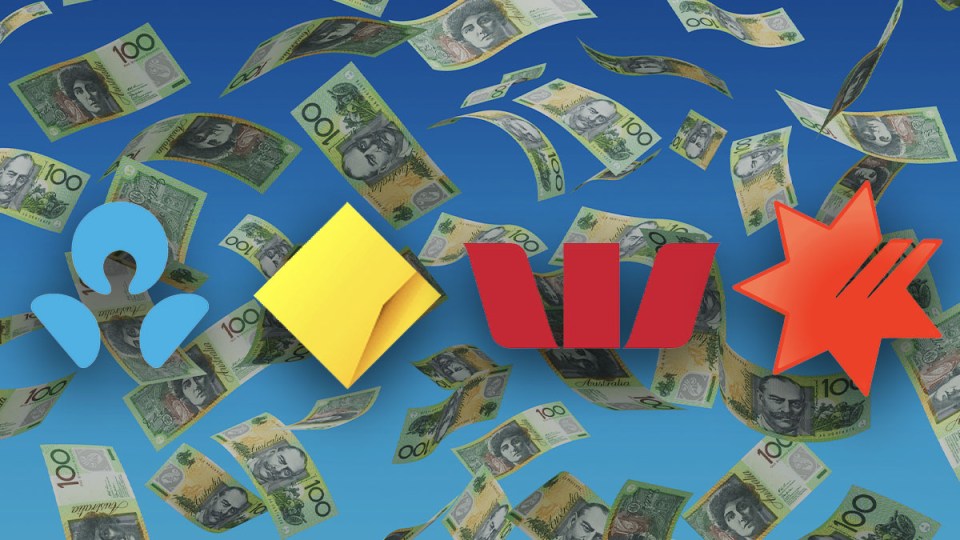 The big banks have more money than they know what to do with. Photo: TND

There is something very unusual happening in the banking world.

The big four banks are raking in the profits after being clobbered by the pandemic crisis, but they’re not shovelling a lot of money out the door to borrowers.

In May, Westpac, NAB and ANZ all reported rises in their half-yearly cash profits that were up at least 45 per cent.

CBA, which has a different reporting schedule, was up 100 per cent for its third quarter. 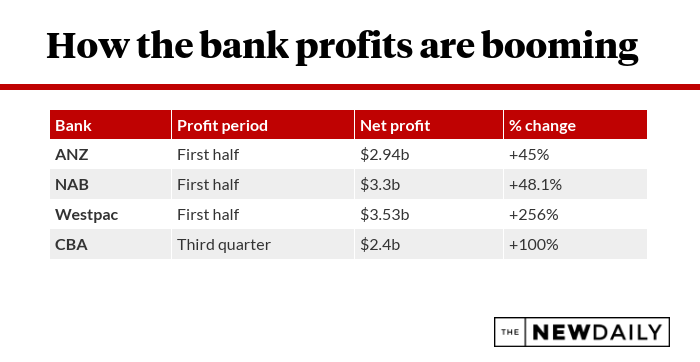 Their shareholders are being rewarded with dividend rises and share prices are on the march.

But strangely, while that’s all happening, the banks are struggling to get rid of the money that has flooded in since the crisis hit in March 2020.

So much so that they have barely used half of the all-but-free money the RBA offered as part of the emergency response to the pandemic.

Known as the Term Funding Facility (TFF), the RBA scheme initially had $100 billion of cheap credit to give out to banks, but was later doubled to $200 billion in October when the RBA also cut the scheme’s interest rate from 0.25 per cent to 0.1 per cent.

That is virtually free money, given the TFF loans last for three years and the RBA’s cash rate is also at 0.1 per cent.

That means, unusually, there is no risk premium for the longer-term loans, so you would think the banks would be rushing to lend it out.

But they’re not, despite the prospect of pocketing that risk premium themselves. Of the $200 billion that RBA governor Philip Lowe has in the offing, $95.8 billion remains untouched.

The reason why is simple, according to independent economist Saul Eslake.

“The banks have been swamped with cash,” Mr Eslake told The New Daily.

“Household incomes have held up far better than was expected [due to employment holding up] and they haven’t been able to spend it.”

The below chart of RBA data shows what’s going on.

Bank deposits jumped by $229.8 billion, or 21 per cent, in the year to March 31. But the only eager borrowers have been home buyers. 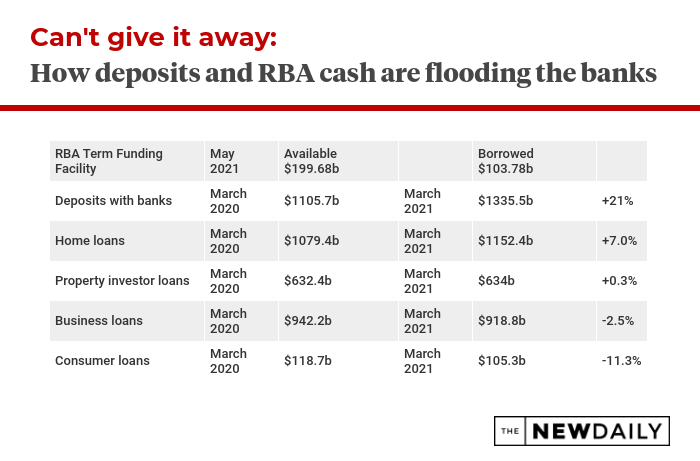 Mortgage debt was up 7 per cent, or $73 billion, well short of the jump in deposits.

Investor property loans were flat while business and consumer loans actually fell by 2.5 per cent and 11.3 per cent respectively.

Deposits are up partly because people are unable to travel overseas.

A lot of that depositor money is even cheaper than that offered by the RBA.

Canstar research shows that savings deposit rates with the banks are paying as little as 0.01 per cent and on many savings accounts no interest is being earned at all.

So, how have the banks been pushing up their profits when the business of lending money is so flat?

Much of it comes down to dodging the COVID bullet.

“Control over the spread of COVID, combined with the government’s swift action [on economic measures], meant Australia has been in a privileged position compared to other countries,” said Stuart Jackson, researcher with Montgomery Investment Management.

And although the economy wasn’t hit as badly as first feared, the banks took a cautious approach with their cash.

“There was pressure put on them by APRA and the government to cut dividends.”

For a rainy day

Mr Jackson said the banks also raised provisions to protect their balance sheets in the event of widespread loan defaults.

“That was shown to be conservative and they have started to bring it back,” he said.

“At this stage they’ve unwound about a third of it.”

And those reserves have flowed back as profits, allowing banks to raise their dividends.

“They’re getting back to where they were before the crisis, but they will stay lower than they were previously because they are going to have to carry more capital as a result of regulatory changes that were going to happen anyway,” Mr Jackson said.

But while the banks may not be jumping at TFF money now, the way they were during 2020 is still having an influence on interest rates, according to JB Were fixed income specialist Laurie Conheady.

“It’s arguably the cheapest financing you’ll ever get,” Mr Conheady said of the TFF loans.

“The RBA said [the TFF] will cease in June and so we expect to see some new issuance coming back into the market.”

That means from June onwards the banks will have to raise money in the bond market to fund their borrowings, which will be more expensive than loans available under the TFF.

“Rates will still be low, but I’d expect to see them in the 35 basis point [0.35 per cent] range,” Mr Conheady said of the bond market raisings.

That will put a little pressure on the RBA’s target of keeping three-year rates at 0.1 per cent until 2024 – which could bring some more risk premium back into the market, giving investors some advantage in lending money for longer periods.

Bank profits are surging. But a major part of their business is struggling