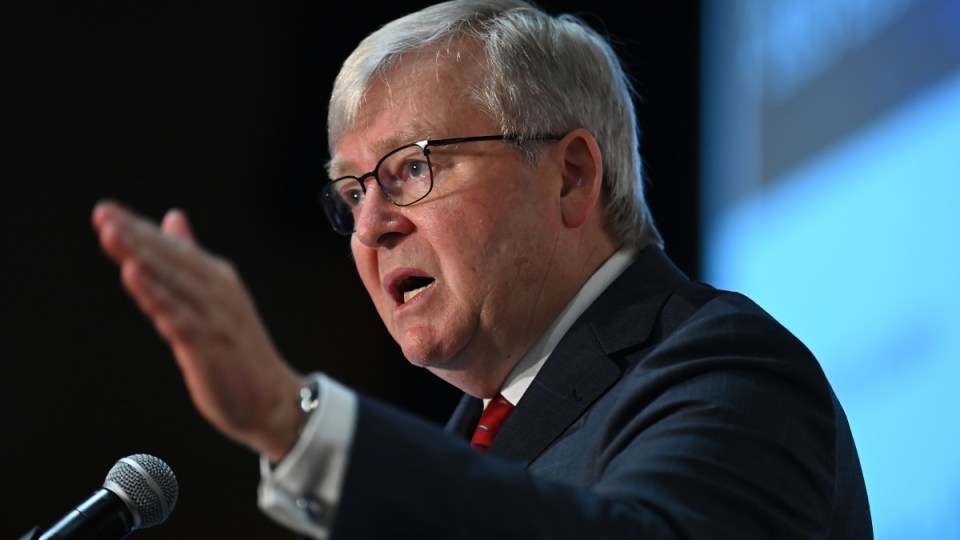 Former prime minister Kevin Rudd says Scott Morrison must “swallow his political pride” and spend big on infrastructure to lift the economy out of recession.

Speaking at a Yahoo Finance videoconference on Thursday, Mr Rudd said the Morrison government had to develop a “compelling economic narrative” to instil confidence and encourage consumers to open their wallets, after consumption slumped by a record 12.1 per cent in the June quarter.

Mr Rudd said his government avoided a recession after the GFC because it had an economic plan that extended beyond short-term payments to consumers.

He said a similar plan has been missing in the Morrison Government’s response so far.

“What I’m talking about is the other part of our strategy a decade ago, which is a national infrastructure strategy. And for us, that had multiple components,” Mr Rudd said.

“It was about what we did at a local level through our schools, what we did with the construction of new levels of social housing, what we did to provide incentives for first-home buyers to get out there into the private residential construction market.

“What we did also with our various renewable energy programs and energy-efficient homes strategy, and on top of that what we did with other forms of medium to long-term infrastructure builds – underpinned by the rollout then of the National Broadband Network.

“In other words, we had a credible economic story to tell, as one wave of economic infrastructure, as it were, cascaded into the next – small-scale, medium-scale, large-scale, as well as immediate-term and longer-term.”

Mr Rudd said putting in place a long-term plan not only generated enough activity to support employment, but instilled the confidence required to prop up consumer spending.

One of the reasons I was so determined to avoid recession in the global financial crisis was its impact on consumer confidence and the nation’s psychology more broadly,” he said.

“And I remember saying at the time that we can’t ballyhoo our way through an economic crisis. We’ve got to have a credible economic narrative.

“I think therefore the challenge for the period ahead for Australia is to develop such a compelling economic narrative, which the Australian people can have confidence in.”

The governor of the Reserve Bank, Philip Lowe, has also called on state and federal governments to invest in infrastructure projects.

During the last national cabinet meeting, Dr Lowe asked the premiers to invest another $40 billion on public works over the next two years to create jobs and boost productivity.

Weeks later, the national national accounts confirmed Australia had entered its worst recession in almost 90 years, as consumer spending fell off a cliff and household savings went through the roof.

Despite the worse-than-expected GDP figures, the federal government remains committed to weaning the private sector off emergency support measures such as JobKeeper and the elevated JobSeeker.

Both payments will fall by $300 a fortnight before the end of September, though the deputy prime minister, Michael McCormack, has hinted the budget will include an ambitious infrastructure agenda.

Asked by The New Daily whether the government should reverse the payment cuts in light of the extended lockdown in Melbourne, Mr Rudd said: “I would strongly argue that whereas it’s not the normal function of government to intervene with massive fiscal policy actions in the economy, this is no normal time, just as the global financial crisis was not a normal time.

“And so, therefore, I would strongly recommend that the government – at least as it relates to the wage subsidy JobKeeper – that it sustain a reasonable payment arrangement.”

Mr Rudd did not specify the amount at which these payments should be maintained, but he stressed the importance of infrastructure spending in the face of ongoing border closures, which he said would take “a huge slice of GDP” from our economy.

“For example, complete the NBN. Take it fibre optic to the premises – that helps hard-wire us for future crises as well.”