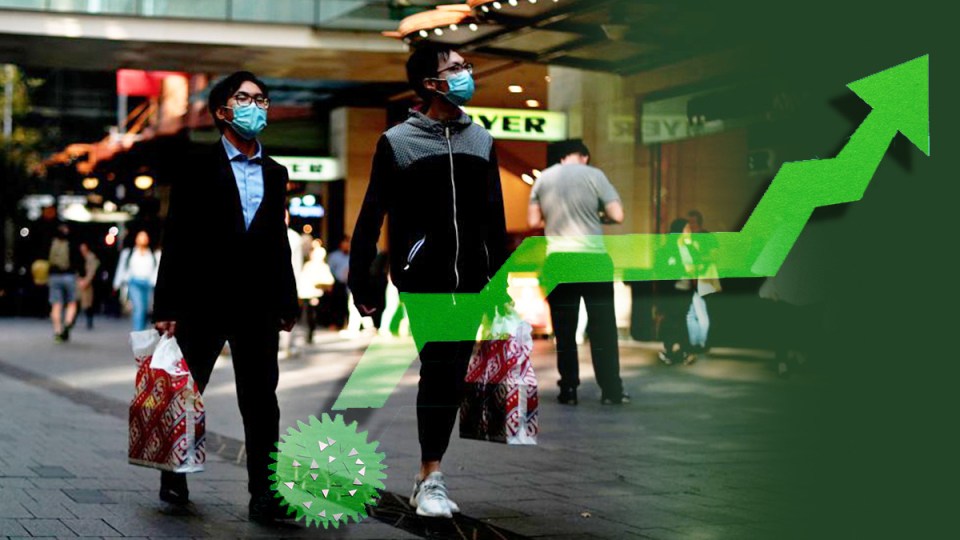 Consumers are loosening their purse strings as restrictions ease and stimulus flows into bank accounts.

Data from Commonwealth Bank shows spending on credit and debt cards in the week to May 15 was down just 2 per cent year on year.

Although that’s well below pre-crisis levels, with spending in January up 7 per cent on the year before, it’s a noticeable improvement on the lows of mid-April.

Having successfully flattened the curve of infections, state and federal governments have taken their first steps towards easing restrictions and shoppers are already returning to stores.

In-store spending in the week to May 15 was still down 5 per cent on the year before, but in mid-April it was down 27 per cent. 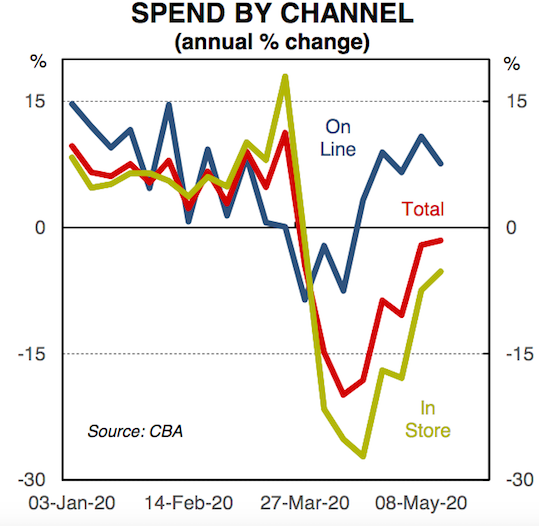 Meanwhile, the closure of many physical outlets has triggered a sustained surge in online sales, which last week were still up 8 per cent over the year.

As the government’s JobKeeper and increased JobSeeker payments begin to flow into bank accounts, consumers are feeling more confident about opening their wallets, according to Commonwealth Bank senior economist Kristina Clifton.

Ms Clifton said in a research note that spending on clothing and footwear, which fell off a cliff during the first wave of coronavirus panic, had “staged a noticeable recovery” on the back of improved sentiment and a change in the seasons. 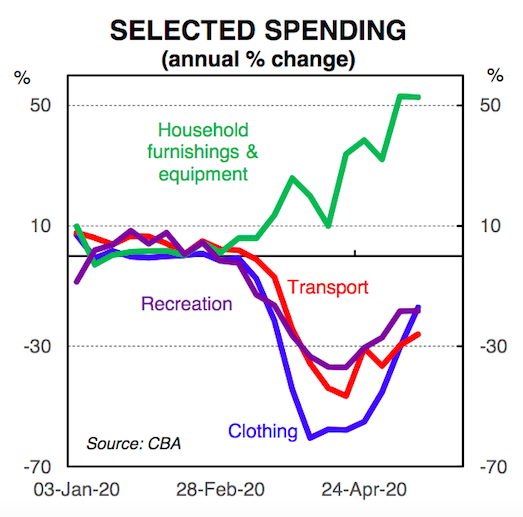 “The start of the colder weather and an easing of restrictions allowing some people to return to work and school may be encouraging clothing and footwear purchases,” Ms Clifton wrote.

“Spending on personal care (haircuts, massages etc) is showing a similar trend to clothing and footwear although the improvement hasn’t been quite as strong.”

The standout performer, however, has been household furnishing and equipment, with Australians using the extra time at home to do some DIY. 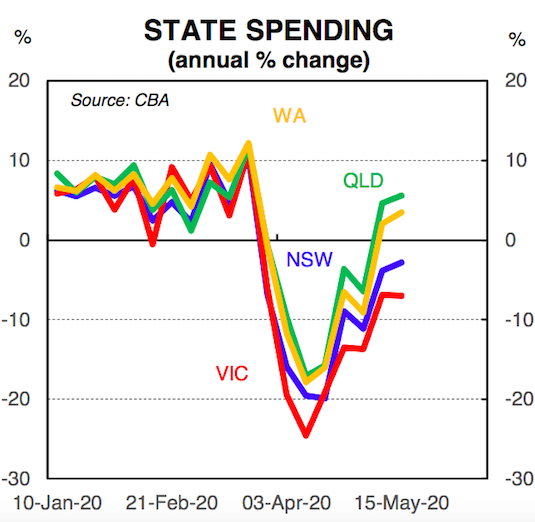 “There is no letup in the DIY and other home maintenance projects going on,” Ms Clifton said.

“Spending in this category is 53 per cent higher than a year ago.”

As for broader levels of consumer spending, Victoria is lagging behind its counterparts due to tighter restrictions.

Although overall spending across the country is down just 2 per cent year on year, in Victoria it is down 7 per cent and in NSW it is down 3 per cent. 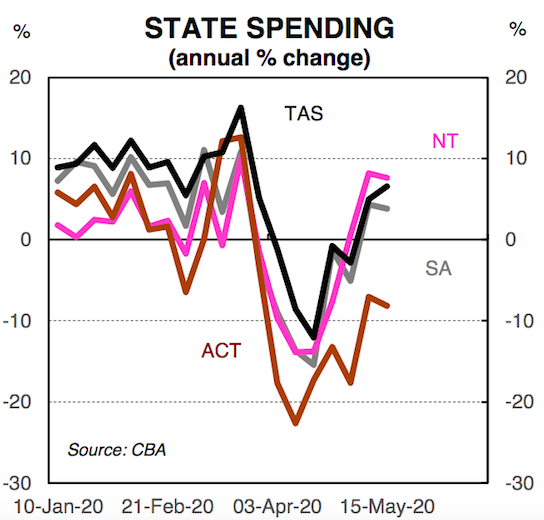 Over the week, it increased 2.2 per cent.

ANZ head of Australian economics David Plank said the easing of restrictions and “massive” government spending had offset “all the COVID-19-related gloom”.

“As a result, ‘future financial conditions’ is now only around 5 per cent below the long-run average, though overall sentiment is closer to 20 per cent below average,” Mr Plank said.

“With more good news about the easing of restrictions likely, it seems reasonable to expect further gains in sentiment.”

The Australia Bureau Statistics on Tuesday also revealed “a further slowing in the fall in COVID-19 job losses between mid-April and early May” – with new data suggesting employment had somewhat stabilised over the two weeks to May 2.

The special payroll data collected by the bureau showed that 7.3 per cent of jobs across the economy, or more than 900,000, were lost during that time frame.

But Indeed Asia-Pacific economist Callam Pickering said the slowing rate of job losses “reinforces this notion that the worst is behind us”.

“Employment appeared to have stabilised in late April / early May,” he wrote in a note.

“With restrictions being lifted, a recovery can begin, provided we avoid a damaging second wave.”