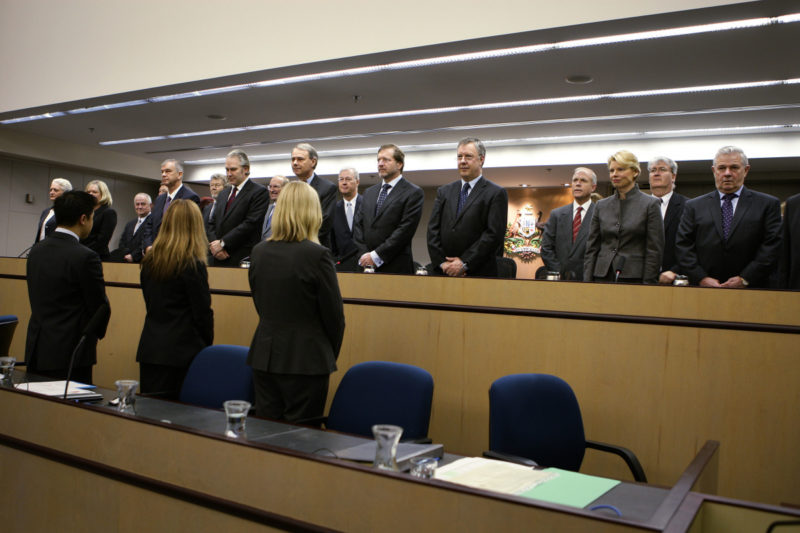 Are Australia's tribunals being stacked for political gain? Photo:AAP

Scott Morrison’s government has been accused of “stacking” judicial bodies with ideological friends before the election, in a bid to create a difficult environment for, as polling suggests, an incoming Labor government.

The government has come under fire for appointing six new members to the Fair Work Commission, all of whom had similar backgrounds.

While there have been concerns about such appointments in the past – the most recent appointments to the commission in December stood out for two reasons.

One was that commission president (and Federal Court judge) Iain Ross had asked the government to make one appointment, yet six new members were named.

The second was that all the new members had a background with employer groups, either as employees or acting as legal counsel.

“Appointments should be balanced in backgrounds, coming from employer and union or employee groups as well as from government,” said Josh Bornstein, an industrial relations lawyer with Maurice Blackburn.

However, this convention appears to have been flouted in recent years with the past six commission appointments all coming from the boss’s side of the street.

The New Daily doesn’t suggest the appointees are not qualified for their roles, only that they come from similar backgrounds.

Mr Bornstein said the appointment of six new members when only one was asked for “helps create a perception that the tribunal is being stacked … I think it undermines its standing with the community and stakeholders”.

“The Fair Work Commission is at the heart of of many contentious and politically charged decisions” and must be seen as being impartial, Mr Bornstein said.

Jobs and Industrial Relations Minister Kelly O’Dwyer (who on Saturday announced she would not stand for re-election) said the extra members were appointed out of need.

“The government appointed additional members to the commission after hearing from unions, employers and employees that the commission processes are not operating as efficiently as they should,” Ms O’Dwyer said.

“The commission performs important public functions, such as facilitating and approving enterprise agreements, and helping to resolve complex litigation fairly and equitably.

“The strong view expressed by stakeholders is that these functions will be performed much more effectively with additional member resources, and will lead to better outcomes for employers and employees.”

Labor Industrial Relations spokesman Brendan O’Connor said: “Over the past five years, none of the government’s commission appointments emanate from the workers’ side of the bargaining table,” Mr O’Connor said.

“This is not just a political issue – it has serious consequences for the way the entire system operates.”

Putting Labor on the spot?

Mr Bornstein, who acts for unions and workers, said there is a view that the appointments put a potential incoming ALP government in a difficult position.

“They could appoint more from the union side, but that would create a significant over-resourcing that would be difficult to justify,” Mr Bornstein said.

The appointment of the Fair Work Commission six is not the end of the story. An analysis by The New Daily showed the previous 20 appointments to the commission made since the Coalition came to power in 2013 also came exclusively from the employers’ camp, or their advisers.

It wasn’t always so

Since the days of the Howard government in the 1990s, appointments to the FWC and its predecessors have been slanted towards the political hue of the serving government. But not till the Abbott government was elected in 2013 has balance been abandoned.

Mr Howard made 17 appointments to the key industrial relations tribunal and at least two, Michael Roberts and Bill Mansfield, had union backgrounds.

The Rudd and Gillard Labor governments appointed 22 members with two – Ingrid Asbury and John Stanton – coming from employer backgrounds and some others coming from government.

Controversy about stacking has not been restricted to left-wing critics. In 2010 deputy president Graeme Watson resigned, saying the commission was “pro-union and anti-jobs”.

The federal government’s Administrative Appeals Tribunal (AAT), which reviews administrative decisions made under Commonwealth laws, has also come under the microscope from critics claiming politicisation.

The AAT annual report shows that 59 new members were appointed in 2017-18, 69 were reappointed and 32 appointments came to an end.

That leaves 27 net appointments made by the current government.

One legal observer, who did not want to be named, said a number of members in the immigration and refugee areas had not been re-appointed when their seven-year terms expired, leading to concerns of politicisation of appointments.

Mr Bornstein said: “I think if Labor gets to power they should abolish the Fair Work Commission and replace it with a new, balanced body.”

Is the Coalition ‘stacking’ tribunals? No shortage of ideological pals getting jobs before election