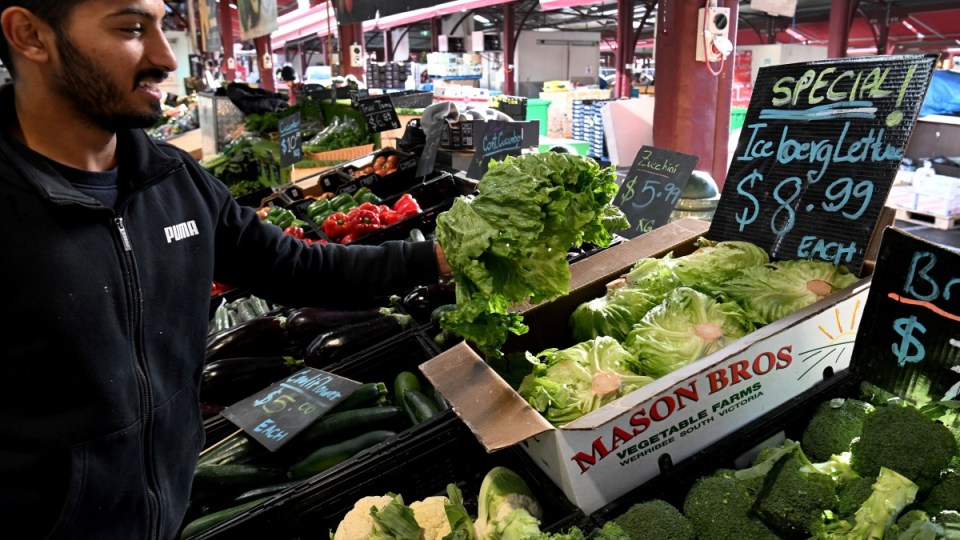 Syed Hyder, from a stall at Melbourne's Queen Victoria Market, where lettuces were $9 this week. Photo: Getty

One of Australia’s big lettuce producers expects record prices for the in-demand vegetable to begin to ease from next week.

John Said, the chief executive of vegetable producer and supplier Fresh Select, said the recent heavy rain had had had had a huge impact on the market.

“We’ve had two floods. The first one a while ago has saturated our soils and made it very hard for us to plant … A second flood not long ago completely wiped out all the crops we had in the ground,” he said.

Mr Said said replanting was causing a massive supply gap, with the only lettuce harvestable being those that had  survived the floods.

“We’re seeing these price hikes because of supply pressure,” he said.

The farmer has been surprised by the high prices being fetched, with a box of 12 lettuces selling to retailers for up to $100.

In some supermarkets, lettuces are selling for $10-$12, with some shelves cleared of lettuce entirely. Earlier this week, fast-food chain KFC said the shortage had driven it to temporarily opt for a “blend of lettuce and cabbage” in its outlets.

“Clearly there are just not enough lettuce around. Hopefully we will see some reprieve next week.”

But the peak body for Australian vegetable growers AusVeg has warned consumers that prices are likely to remain high because of production pressures and poor weather.

“Cost of production pressures have been upon us for 12 or 18 months – it’s been on the increase for some time,” AusVeg’s national public affairs manager Tyson Cattle said.

He said the sharp increases in recent months had been driven by bad weather in the food bowl of Queensland.

Mr Cattle said prices were likely to stay high while the cost of production issues continued.

“We will not be going back to prices that we saw in pre-COVID levels of cheap fresh produce,” he said.

The major supermarkets have also warned customers that bad weather and ongoing COVID-related supply chain disruptions have made it difficult to keep up stocks of some fruit and vegetables.

Woolworths general manager of fruit and vegetables Paul Turner said last week that, as well as lettuces, the retailer was struggling to source zucchini, beans, broccoli, berries and some varieties of tomatoes.

Mr Cain said the supermarket giant had “five times as many requests for price increases as we had last year”.

“And they’re not small amounts,” he said.

“Whether things plateau or whether they come down slowly remains to be seen.”

Lettuce relief: Grower’s tip for when prices will fall