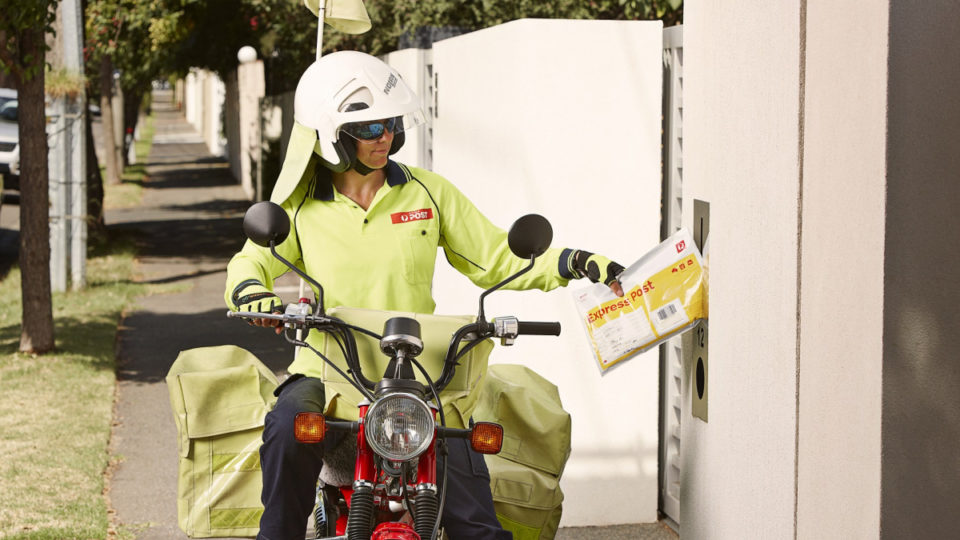 Customers will be given more notice the next time a postie arrives at their door, according to Australia Post. Photo: AAP

Anyone who has ever had a parcel delivered by Australia Post is familiar with the dreaded “sorry we missed you” card.

Usually left on the welcome mat, in the letterbox or slid under the front door, it tells you your home delivery has just become a post office pick up, triggering a wave of frustration.

But Australia Post says new upgrades mean it will be leaving far fewer of those cards on Australian doorsteps.

Australia Post has just completed a three-year transformation of its network that it says will make the business faster, more reliable and transparent to Australians.

Billed as the largest telecommunications upgrade in Australian history, the now-completed project saw the taxpayer-owned postie expand its parcel-tracking capabilities to include delivery estimates within two-hour windows, millions of which were sent to customers last Christmas.

And Australia Post chief information officer Munro Farmer said your postie could soon be able to text you if you don’t hear the door knocking.

“[We’re] now a lot faster and you can see what’s happening closer to real time.”

It will allow Australia Post to modernise its in-store and delivery offer to match privately owned competitors like DHL and Amazon, he said.

“They can now improve on that through this new system … with this technology, there’s no reason they should be lagging behind other competitors.”

The upgrades come after a difficult two years for Australia Post, which has had to deal with unprecedented demand during the COVID-19 online shopping boom while trying to keep more than 50,000 staff working during the pandemic.

Community anger has mounted about slower deliveries, less frequent letter drops and even a non-COVID related watch scandal that engulfed Parliament for a time last year.

But after a record-shattering Christmas, Mr Farmer said the network is in a much better position to deal with shocks like COVID-19.

He said all Australia Post stores have now been connected to the National Broadband Network, equipped with wi-fi capabilities and brought into a digital network that connects each location.

This means thousands of Australia Post stores and its major distribution centres are now more resilient to shocks like COVID-19, Mr Farmer said.

For example, when demand for services rises quickly in a certain area, Australia Post can now expand much more quickly.

“It would have taken months before, but it’s taking days now.”

A glimpse at the future

But consumers have seen changes, particularly over Christmas.

Australia Post sent five million notifications to consumers in December notifying them of the two-hour window in which their parcel would arrive.

Before the pandemic, those customers didn’t know whether their parcel would arrive in the morning or evening, making it hard to plan things like grocery trips.

Mr Farmer said the more-precise delivery estimates offer a glimpse of what the post offices of the future will look like, particularly as Australia Post stores do more than just deliver our letters.

“We’ve opened up the future,” he said.

Some of these services are more essential than others.

Australia Post’s banking offer, called Bank@Post, has become more important over the past five years as major banks have continually closed hundreds of branches in rural and remote areas.

Mr Farmer said the network upgrades have made the provision of these financial services more reliable.

“We can now identify and mitigate 80 per cent of issues and, as a result, we have been able to reduce business impacting outages by over 70 per cent,” he said.

For a business or household in a place where the nearest bank branch is now more than 500 kilometres away, a post office outage is a serious, and potentially dangerous, problem.

But for the vast majority of Australians these investments will show up in more subtle ways.

That includes post office staff processing in-store transactions on mobile phones and tablets, and more passport services made available under an ongoing agreement with the federal government.

“More and more services will be automated,” he predicted.

“If you’ve got a package, you’ll soon be able to put it on the scales, get instant information and pay with your card.

“You won’t have to spend five minutes or more standing behind the person at the front of the queue.”