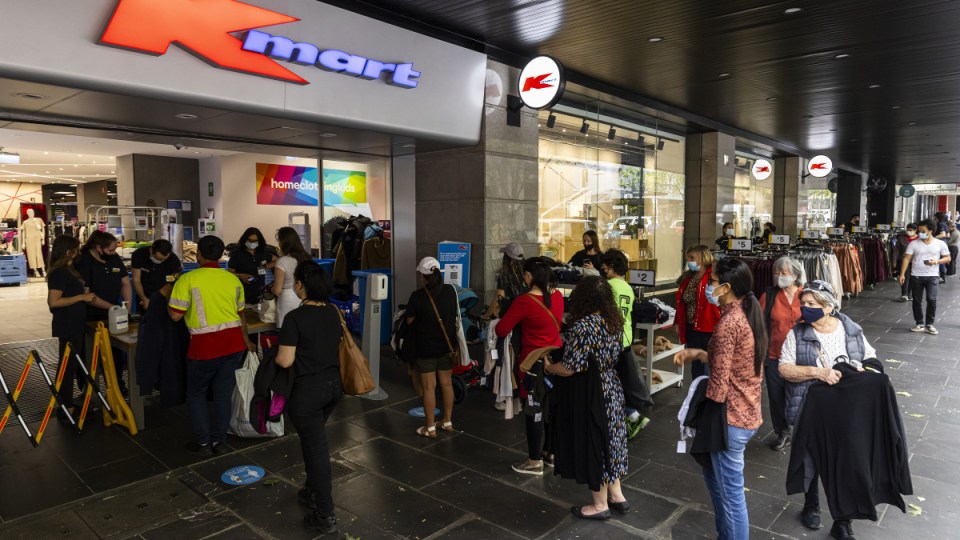 Retailers are preparing for a bumpy ride in 2022 after the Omicron and Delta waves spoiled trading over Christmas.

Economists said retail conditions were “choppy” over the New Year period after the Australian Bureau of Statistics (ABS) revealed on Tuesday that sales fell 4.4 per cent in December – a far weaker result than was expected.

Sales plunged because people brought forward their spending to November as lockdowns eased and because the Omicron wave encouraged people to avoid shops towards the end of the year.

And while sales are still above historical levels, retailers are warning of further pain in January after Omicron decimated consumer confidence.

“Conditions for retailers are both choppy and challenging,” CommSec chief economist Craig James said in a research note on Tuesday.

Tuesday’s retail data was unsurprising to retailers, who have been warning for weeks that Christmas trade was affected by the Omicron wave and that this weakness continued into January.

Mr Salakas told TND that about half his staff were out over Christmas, forcing him to forgo sales because his shops were unable to service shoppers.

“People weren’t having Christmas parties either – that really stung us.”

Staff have since come back, but consumer confidence plummeted in early January, extending the run of weaker trading.

“There’s a lot of caution out there, a lot of events being cancelled,” Mr Salakas said.

A range of major retailers have also warned about weak January trading, including department stores Myer, Kmart and Target.

Those trading updates were reflected in the latest ABS data on Tuesday.

Department store spending fell a massive 21.3 per cent over December, while clothing, footwear and accessories sales plunged 17.3 per cent.

In fact, food retailing – which includes supermarkets – was the only retail category to record stronger sales in December compared to November.

The weak December result was also due to strong sales in November.

Economists said Delta brought forward significant amounts of spending because consumers in New South Wales, Victoria and Canberra were emerging from lockdowns in late October and ready to hit the shops after being stuck at home for long periods.

Online shopping events like Black Friday and Cyber Monday only added to the activity, helping boost December-quarter retail trade by 8.7 per cent.

These promotions are becoming more popular in Australia and were helped along in 2021 because of fears about Christmas delivery times.

“There was a definite pull-forward of spending into November, in part due to an extended sales period and concerns over delivery times ahead of Christmas,” BIS Oxford senior economist Sean Langcake said.

“Consumer caution at the outset of the Omicron outbreak will have also weighed on sales at the end of December.”

With the Christmas trading period under their belt, retailers now face an uncertain year in 2022.

Omicron has already weighed on early January trading, while the huge sales binges of 2020-21 have subsided as consumers are no longer renovating their homes or buying lockdown items, such as equipment for new home offices.

APAC Indeed economist Callam Pickering said the retail outlook in the near term is poor, but is more positive over the medium term before an expected increase in sales later this year.

“Retail trade will be an important measure of consumer confidence in the months ahead. It is one of the best measures of the impact that the Omicron variant is having on household behaviour.”

PM confirms death of Australian who was providing humanitarian aid in Ukraine
COVID continues to claim scores of Australian lives every day
Ukraine begs for weapons as Russian artillery pounds besieged cities
‘Greenslide continues’ as party snatches seat of Brisbane from the Liberals
Drenched in her friend’s blood, 11-year-old survived Texas massacre by playing dead
Renewed Russian attacks threaten Ukraine’s last toehold in east
Petrol prices are on the up. Here’s how to save money at the pump
Today's Stories