Petrol prices are rising fast on the back of higher global oil prices. Photo: TND

Australian motorists are facing an extended run of budget pain at the bowser, with rising petrol prices tipped to stick around over summer.

You’ve probably already been shocked driving past the petrol station over the holidays, with bowser prices hitting record highs in late January on the back of rising oil prices and a new peak in local market cycles.

Thankfully, prices are now slowly falling in Brisbane, Melbourne and Sydney, but experts warn it won’t be long before they start rising again.

And when they do, petrol price records are likely to be broken.

It’s going to make shopping around all the more important this year, with global oil prices rising in response to fears of a war in Ukraine and stronger global demand for petrol after coronavirus lockdowns ended.

To understand why petrol prices are rising, you need to appreciate that Australia is a price-taker for oil on the global market. In other words, we produce none of our fuel and rely on overseas imports to keep all our cars moving.

The price of those imports rose a huge 79 per cent in 2021, according to ABS data published on Thursday – more than five times the overall rise in import prices of 13.8 per cent during that time.

These prices are rising for several reasons. One key issue is that large oil producers such as the OPEC nations in the middle east and Russia, another major oil producer, are undershooting their production targets, limiting supply.

Economists are also predicting that rising global demand for petrol and fears about a war in Ukraine, which could destabilise oil markets, will also put upward pressure on prices this year.

“The elevated oil price and therefore petrol prices has continued in 2022 on geopolitical concerns between Russia and the Ukraine,” CBA senior economist Belinda Allen said.

“We anticipate the terms of trade to retreat in 2022 with commodity prices falling and with gains in import prices.”

It all means there’s less oil on the global market at a time when demand is rising due to greater movement triggered by an easing of COVID restrictions.

One rule of thumb in economics is that when supply falls and demand rises, prices soar – that’s what we’re seeing here.

But Australian motorists have another factor to worry about: The promotional cycles across large east coast markets, including Sydney, Melbourne and Brisbane.

Basically, petrol prices in these markets fluctuate wildly from month to month, as large retailers push up prices before independents drive them back downwards.

But unfortunately for motorists, prices spend more time at the peak than they do at the trough.

This means although the general trend for petrol prices this summer is upwards (due to rising oil prices), most Australian motorists will also face wild fluctuations that could cost them even more to fill up their vehicles.

You can see this in the below graph. Basically, the peaks and troughs of the pricing cycles rise over time. 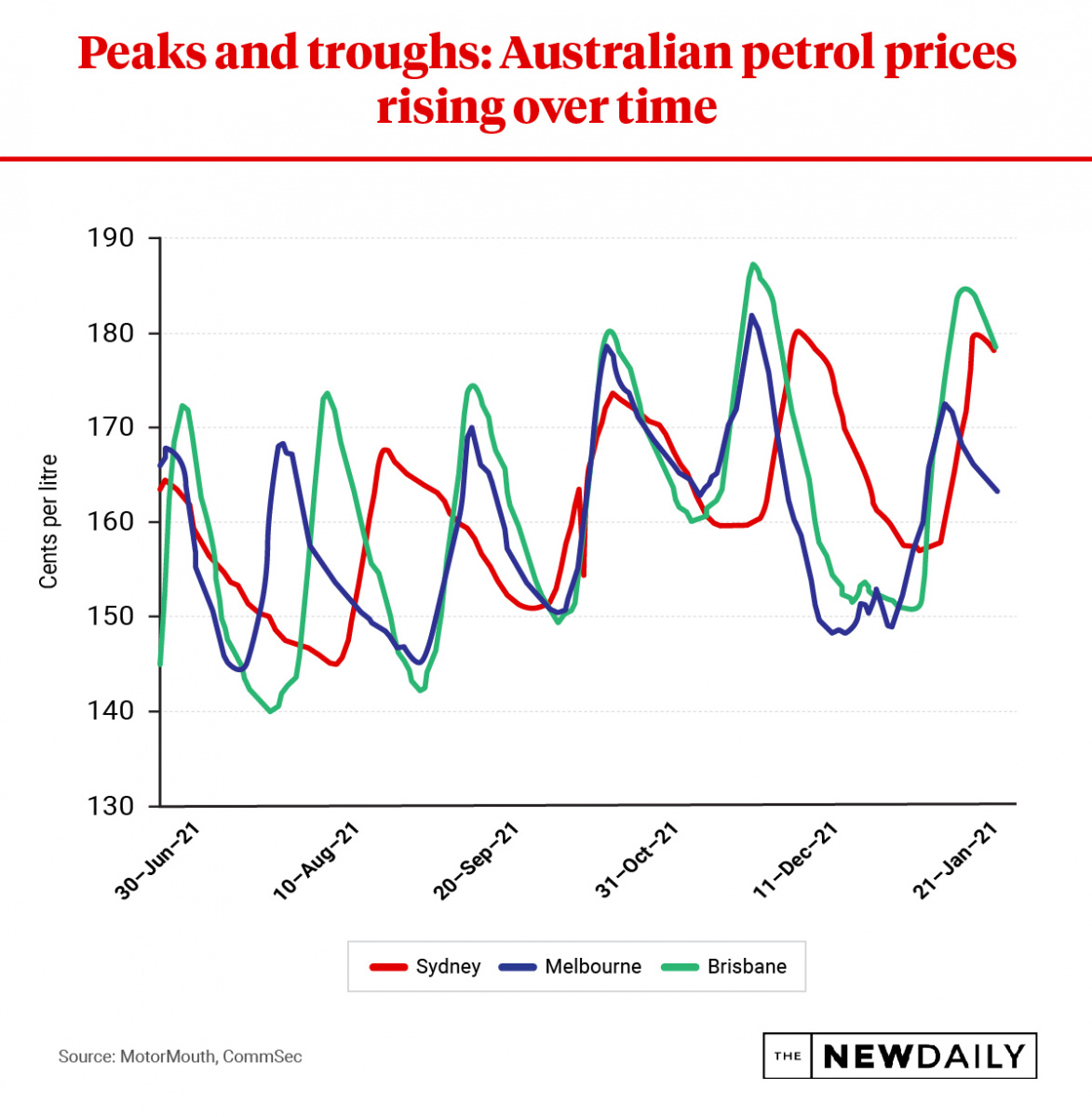 How to shop around for petrol

Luckily, there are ways to avoid the worst of the pain and save hundreds of dollars a year on your fuel bill.

The first step is to take advantage of market diversity. Just because the average petrol price in your city is rising doesn’t mean there are no retailers offering prices below the average price.

The trick is finding the right place to fill up. And for that, you can turn to the one of many fuel price comparison apps available free of charge.

The National Road and Motorists Association (NRMA) and fuel tracking companies Motormouth and Fueltrac all run their own apps, with ACCC research finding they can help save motorists up to $520 on their annual petrol bill.

The next step to saving money at the bowser is understanding what type of retailers to fill up with. ACCC research has shown that small, independent petrol retailers are often cheaper than the larger ones.

And the price gap is not small. In fact, those who shop exclusively with small retailers can save about $350 annually, according to the ACCC.

Petrol prices are on the up. Here’s how to save money at the pump