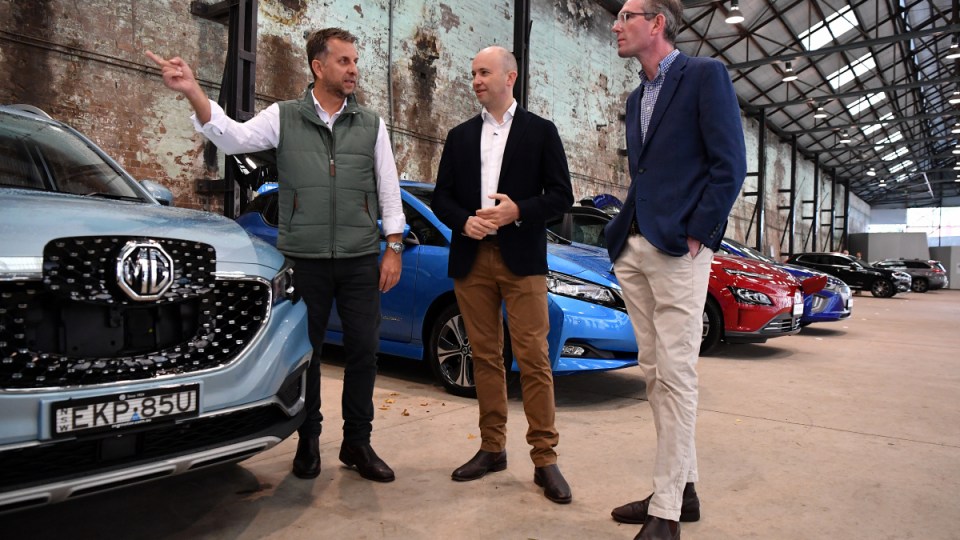 The NSW government has announced a $490 million package to support the transition to EVs. Photo: AAP

The New South Wales government has joined the ACT in waiving stamp duty on electric vehicle purchases as part of a $490 million strategy to drive faster uptake.

It comes as a monthly poll of leading economists, published on Monday, found that 82 per cent believe Australian governments “should take action to accelerate the takeup of electric cars”.

The NSW strategy was released on Sunday.

On top of the stamp duty exemption, it provides 25,000 rebates worth $3000 each while also delaying a road-user charge on EVs for six years, or until new EVs make up 30 per cent of new vehicle sales.

NSW Energy and Environment Minister Matt Kean, who had previously made public his opposition to the early introduction of a road-user charge, said the state’s “nation-leading” plan was forecast to see EVs account for 52 per cent of new cars sold in NSW by 2030-31.

“We know that with new cars staying on the road 15 years on average, the vast majority of new cars sold in NSW need to be EVs by 2035 to achieve net-zero emissions by 2050,” he said.

The major incentives at the heart of the plan will come into effect on September 1.

The measures will form part of the NSW budget to be handed down on Tuesday, and also include $171 million of investment in new charging infrastructure as well as a $33 million plan to transition the NSW government fleet to EVs by 2030.

The NSW government said it wanted to install chargers at 100-kilometre intervals along major highways and at five-kilometre intervals on major roads in Sydney, so that households with limited off-street parking were never more than five kilometres from a charger.

Australia Institute climate and energy program director Richie Merzian said the strategy was a good model for other states to emulate and showed NSW had learnt from the mistakes of Victoria.

“When combined, this rebate and stamp duty exemption should reduce the upfront cost of a fully electric Hyundai Ioniq in NSW by around $4500 to $44,500,” Mr Merzian said.

“The race is now on between jurisdictions like NSW and the ACT to become the hub of EVs in Australia.”

By delaying for six years the introduction of a 2.5-cents-per-kilometre charge on EVs, the NSW government believes its plan strikes a balance between supporting the move to net-zero emissions and compensating for the loss in fuel excise revenue as people abandon internal combustion engines.

It comes after the Victorian government, which has since introduced a $3000 subsidy, passed legislation at the end of May to bring in a 2.5-cents-per-kilometre charge from July 1.

“Electric vehicles are not only cheaper to run and quieter on our roads, but they also reduce both carbon emissions and air pollution, which results in dramatically improved health outcomes for our communities,” NSW Transport and Roads Minister Andrew Constance said.

“As the world’s right-hand drive market moves to manufacturing electric vehicles, we have to make sure we have the policies in place to give industry the green light to increase model availability and cut entry price points.

“The average NSW driver will save around $1000 a year in running costs by switching to an EV, and those savings can be up to $7500 a year for businesses, taxis and freight.”

In the ACT, Canberrans can access $15,000 in interest-free loans to buy an electric vehicle, and are exempt from paying stamp duty and receive two years’ free registration if they do.

The NSW announcement came a day before The Conversation published its latest monthly survey of economists in conjunction with the Economic Society of Australia.

Fifty one of 62 economists surveyed said Australian governments should take action to speed up the transition to EVs, of whom 82 per cent said the government should subsidise public charging points and 53 per cent said it should remove the luxury car tax on all electric cars.

Six of the 51 said they had supported the special measures reluctantly, as their preferred policy alternative was a carbon tax.

The federal government has ruled out taxpayer subsidies as an expensive way of reducing carbon emissions, arguing that Australians will choose to buy them of their own accord when market forces naturally drive down their price.

In contrast, federal Labor has said it would cut import tariffs and fringe benefits tax on non-luxury electric cars if it won the next federal election – though it has refused to criticise the Victorian Labor government for introducing a road-user charge on July 1 this year.

NSW to abolish stamp duty on EVs amid support from economists