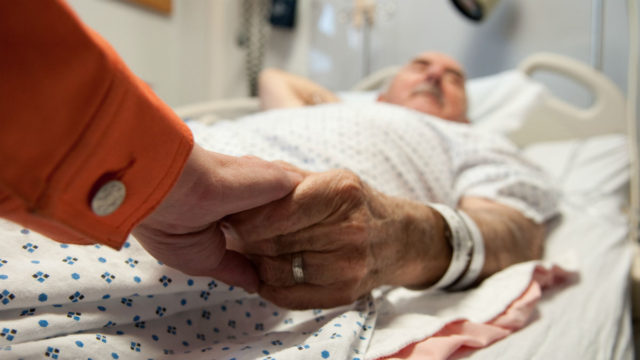 Cancer patients with private health insurance are paying almost double the out-of-pocket costs than those without insurance, reiterating the urgent need to regulate price setting in the health care system.

A research project in Western Australia found those cancer patients living in a metropolitan area who had private health insurance were paying an average of $4670 to cover the gap for their treatment.

In comparison, cancer patients in the same area without insurance were only facing an average cost of $2510.

The findings and recommendations come from the Medical Journal of Australia, which is published on Monday.

It further explains the data that shows more and more Australians are turning their backs on private health.

The team from the University of Western Australia tracked 400-plus patients with colorectal, lung, prostate or breast cancer, and surveyed them about their treatment costs through questionnaires.

It was led by Professor Christobel Saunders.

“The higher out-of-pocket expenses for people with private health insurance or undergoing surgery indicate the importance of health care funding arrangements and the magnitude of the costs borne by patients,” Professor Saunders and colleagues wrote.

The team used its research to push for a review into the nation’s unregulated, private price-setting market.

“Problems that still need attention in the unregulated private fee-setting environment in Australia include price discrimination in some specialist sectors,” it wrote.

The team also wants more easily accessible information for patients and their families about services, costs and gap payments.

It further suggested the idea of bundling cancer treatments, so that patients can better understand and plan for associated expenses.

The Australians in the study who lived rurally also paid less than their city-dwelling counterparts.

In rural settings, a cancer patient with insurance was paying an average of $2455, compared to those without, who had an average bill of $1103.

December 2019 data from the Australian Prudential Regulation Authority showed 73,000 fewer Aussies had private health than they did two years previous.

This is a trend being led by young people, which is why the death spiral keeps on spinning.

But in line with our ageing population, an extra 60,000 older Australians (70-plus) have signed on as policyholders.

Grattan Institute health program director Stephen Duckett explained to The New Daily in February, when the December figures were released, how this contributes to more expensive insurance for those who have it.

If you’re young, you’re less likely to make claims – but you pay the same as someone at the other end of the age scale.

The cost of claims is growing across the industry at some 5 per cent per annum.

Premiums (delayed from April) that are introduced in October will likely be about 2.92 per cent.

Therefore, younger Australians are ditching insurance because it costs too much.

The premiums have to account for this by rising – and there’s your death spiral.

“Young people are saying, ‘What is my likelihood of using hospital services in the next 12 months?’,” Dr Duckett told TND in February.

“For the majority of them, not very high.

“So it’s not value for money for a young person, especially given the fact Medicare exists.”

Dr Duckett said the best and most genuine way to save the industry is to overhaul the regulations that govern it.

Private health cancer patients stung more than those without: Report