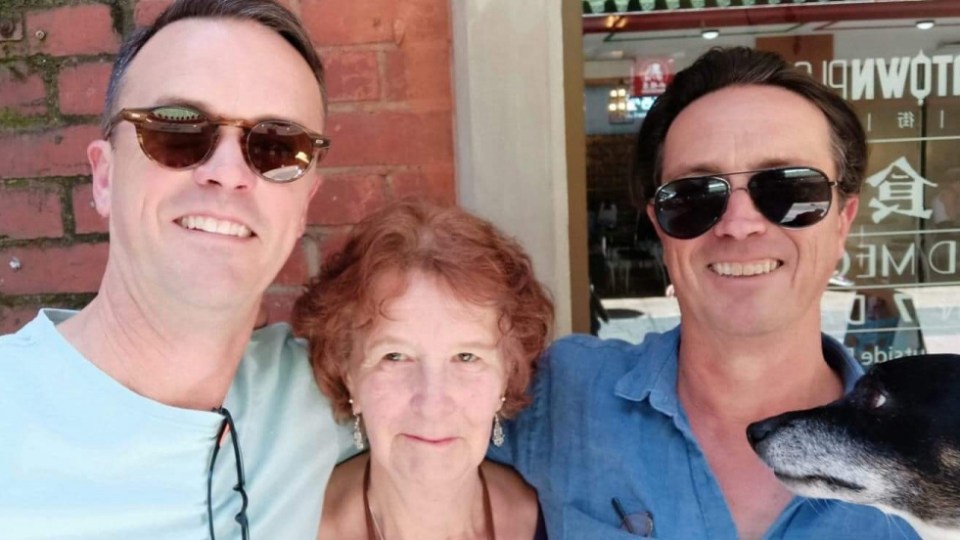 Pat Isaacs (with her sons Gary and Damon) dropped her private health cover after realising she had to pay $6000 for knee surgery.

Australians with private health insurance are being taken aback by high out-of-pocket costs, forcing many to abandon their cover as the industry faces a “death spiral”.

When Pat Isaacs was quoted $18,000 by her orthopaedic surgeon to undergo knee replacement surgery, she assumed her private health insurer would adequately cover the cost.

It wasn’t until she phoned her insurer – Australian Health Management – that the 75-year-old pensioner from regional Queensland realised she would still have to shell out $6000.

In an effort to lower out-of-pocket payments, Health Minister Greg Hunt announced on Tuesday that insured Australians would be able to claim specialist treatment delivered outside hospitals – beginning with mental health and orthopaedic services – by mid-2020.

As it stands, private hospital cover only helps pay for treatment received inside hospitals.

‘It made me catch my breath’

Thinking she would be financially better off paying for private health insurance than bearing unforeseen medical costs, Ms Isaacs forked out about $150 per month over 10 years for near-top private cover.

But when it came down to it, the former social worker said it simply wasn’t worth having.

“I certainly didn’t expect to have to fund one-third of my surgery,” Ms Isaacs said.

So she phoned her insurer and dropped her cover, leaving her with no choice but to register on the public hospital waiting list.

“I would have had quicker access with private health, but just don’t have the excess gap fee, as my only income is the age pension,” she said.

Her concerns where echoed by a new Grattan Institute report, released on Tuesday, which warned that private health insurance was caught in a “death spiral”.

The future of the industry looks bleak unless specialists reduced their fees and excessive private hospital costs were reined in, the report said.

According to the researchers, a small group of “greedy” specialists were billing patients at more than twice the official fee schedule and often to the surprise of the patient, who had to foot most of the bill.

“The higher fees have nothing to do with the skill of the surgeon … (the) small minority of specialists who charged more than twice the schedule fee are simply greedy,” report co-author Stephen Duckett said.

Premiums could be cut by 10 per cent if private hospitals focused on treating patients rather than keeping them in longer to recoup more money, Dr Duckett said.

All up, he estimates Australian private health patients could save up to $2 billion a year on premiums.

Ms Isaacs’ 49-year-old son Damon dropped his family’s hospital cover because he and his wife “don’t feel that the benefits of private health cover match the costs”.

“Private health is just too expensive and it keeps going up and up and up,” the energy consultant said.

An avid cycler, Mr Isaacs recalls having to pay $300 in out-of-pocket costs to a private hospital he was rushed to after crashing into a car door that was opened in his path.

“I thought that’s a bit strange … I could’ve just gone to a public hospital and it cost me nothing,” he said.

Dr Duckett recommends from 2022 private patients get their bill as a single bundle, including the costs of doctors, prostheses, diagnostics and hospital stays.

The report said navigating private insurance was complex – like receiving multiple bills for a single treatment – making it hard for patients to estimate how much treatment would cost.

The Australian Private Hospitals Association said if private hospitals were forced to bill the patient in one bundle, premiums will rise.

Chief executive Michael Roff said the proposal would place an administrative burden on private hospitals while making them “quasi-employers” of doctors, forcing them to up their indemnity insurance – with the costs passed on to patients.

“It sounds like a good idea in theory. In practice, I’m not even sure that it would be legal,” Mr Roff said.

‘Made me catch my breath’: Private health insurers failing Aussies with out-of-pocket costs