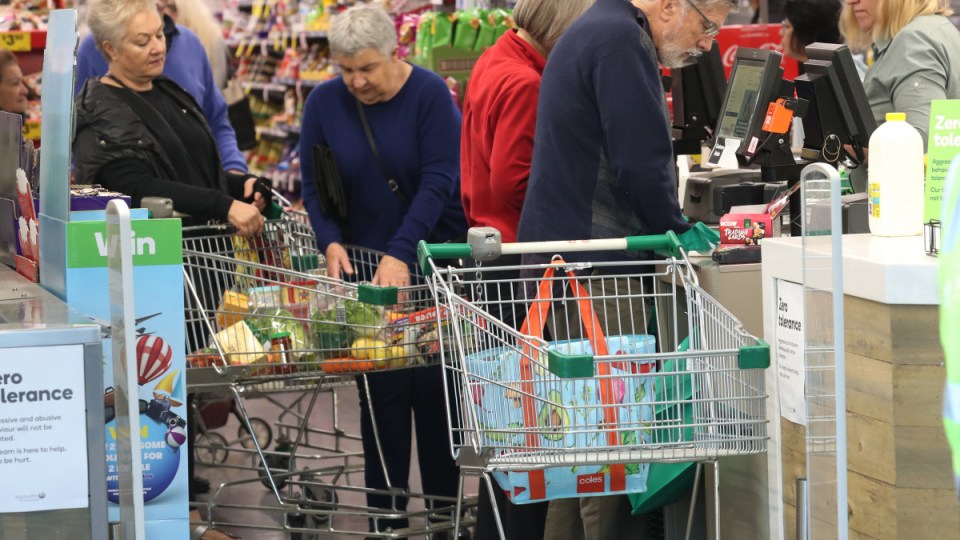 Shoppers flocked to the supermarkets as the coronavirus pandemic loomed – leading to booming sales. Photo: AAP

Woolies said sales growth peaked in the week that ended on March 22 at 40 per cent, and noted toilet paper, cleaning goods, rice and pasta were the most popular items.

There was a similar jump in Woolworth’s New Zealand operations, where total food sales had a 13.4 per cent jump to $1.8 billion.

The result falls short of the growth experienced at chief rival Coles, which on Wednesday reported an unprecedented 13.1 per cent sales growth and $8.23 billion in third quarter supermarket revenue.

Woolworths chief executive Brad Banducci said the past fourth months had been one of the most challenging periods in the company’s history.

“After a slower start to the quarter, Australian and New Zealand food sales increased materially from late February due to pantry-loading and more recently with customers eating more at home,” he said.

“The COVID-19 [coronavirus] crisis is far from over, but we are hopeful that we are now settling into a ‘new normal’ and are confident that we will get through this together.”

The company’s portfolio of over 300 hotels – which were forced to close in late March due to social distancing restrictions – eked out a 2.4 per cent increase in comparable sales for the quarter.

But the company still expects to make a $30 million to $35 million loss per month before interest and tax while the venues remain closed.

Efforts to combat the disease’s spread are also taking a toll on Woolworth’s finances, the company revealed.

Since the outbreak began, the company has increased its cleaning regime and put security guards into a number of its stores.

Volunteer temperature checks are also being administered to staff and face masks are being made available to staff who wish to use them.

The cumulative cost of these and other measures is estimated to cost between $220 million and $275 million in the fourth quarter.

Coles too warned investors that additional cleaning, security, and other measures designed to mitigate the coronavirus’ spread will weigh on fourth quarter profits.

Woolworths is also continuing to pay back the more than 7000 current and former supermarket staff it underpaid, after learning of the errors last year. It has acknowledged it owed a total of $315 million.

These payments will be finished by the end of the 2020 calendar year.