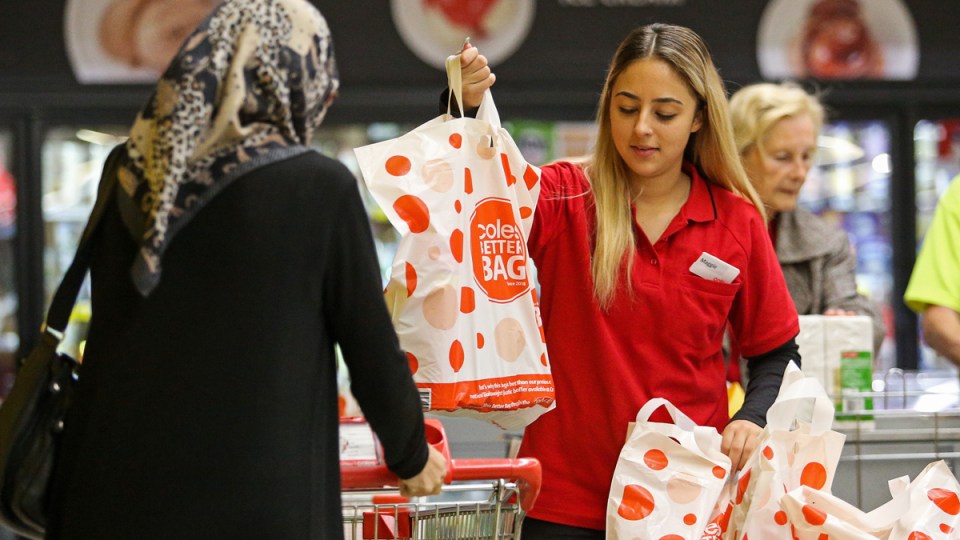 Panic buying of essential supplies and toilet paper has led to the largest ever monthly rise in retail turnover.

Panic-buying of essential supplies and toilet paper has led to the largest ever monthly rise in retail turnover, according to new ABS data.

Preliminary figures show retail turnover jumped 8.2 per cent in March 2020 – eclipsing the previous record of 8.1 per cent when consumers rushed to buy goods before the introduction of GST on July 1, 2000.

ABS said the numbers reflected “unprecedented demand” in the food retailing industry as Australians hoarded groceries and other essential supplies out of fear the pandemic could shut down crucial supply chains.

Supermarkets (+22.4 per cent), alcohol retailers, and other specialised food categories all reported strong sales in March.

Turnover doubled for toilet and tissue paper, rice and pasta.

And Australians upped their spending on canned food, medicinal products and cleaning goods by more than 50 per cent.

“In addition to food retailing, sales were also strong in retail industries selling items related to home offices for example,” the ABS said.

“The rises were slightly offset by strong falls in industries including cafes, restaurants and takeaway food services, and clothing, footwear and personal accessory retailing, which were impacted by new social distancing regulations introduced in March.” 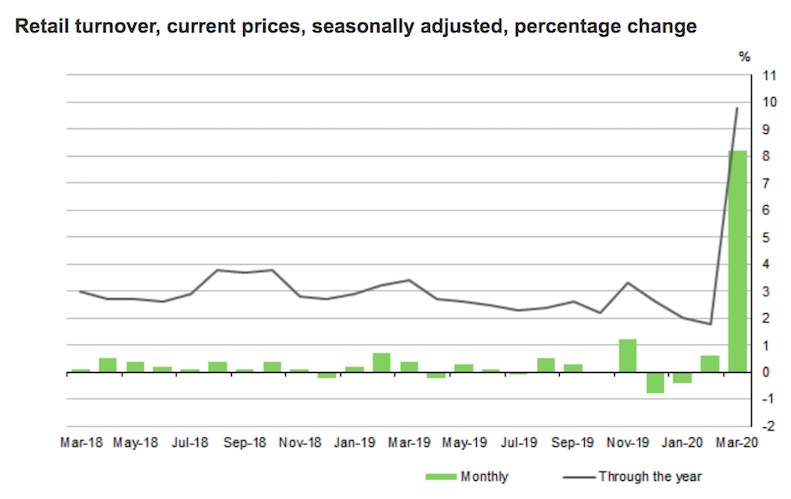 The ABS said panic-buying peaked in mid-March before tapering off at the end of the month – supporting earlier claims from ANZ and Commonwealth Bank.

The record rise in turnover disguises an otherwise grim outlook for consumer spending, though.

Separate ANZ research shows year-on-year growth in retail spending has since fallen into negative territory – with increased grocery spending no longer offsetting falls in other areas.

The bank’s data shows retail spending for the week ending April 17 was down 8 per cent year on year.

ANZ Research economist Adelaide Timbrell said the decline was the “worst so far – but far from the worst”.

“The transition to lockdown really hid the weakness in the economy from a consumer spending perspective, because people were stockpiling and moving purchasing forward,” Ms Timbrell previously told The New Daily.

“We’re soon going to be seeing the other side of that coin, where people already bought up on all the essentials, and now won’t have the means nor the motivation to keep spending.”

The latest ABS release comes after the bureau revealed on Tuesday that Australian businesses shed more than 780,000 jobs during the first three weeks of coronavirus restrictions.

Hours later, Reserve Bank governor Philip Lowe warned of the biggest economic shock since the Great Depression of the 1930s.

Dr Lowe said the economy would recover quickly once restrictions start to ease – predicting GDP growth of 6 to 7 per cent in 2021 after a fall of roughly 6 per cent this calendar year.

But he said the government must “focus on making Australia a great place for businesses to expand, invest, innovate and hire people” – flagging reforms to “the way we tax income generation, consumption and land” as key government priorities.

“We have no plans to change the GST,” he told the ABC.

“What we do have a plan for is obviously lower taxes and that’s been our track record.”