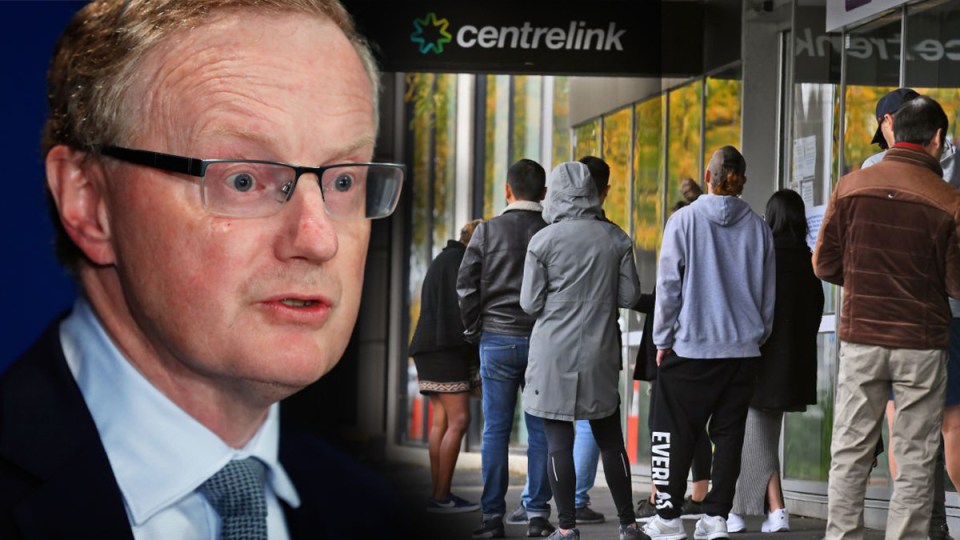 RBA governor Philip Lowe says there are more job losses to come from the COVID-19 fallout. Photo: The New Daily

Australia is headed for its biggest economic shock since the Great Depression of the 1930s, the Reserve Bank has warned.

After the ABS revealed more than 780,000 jobs were lost in just three weeks of restrictions, Reserve Bank governor Philip Lowe told Australians in a televised speech to expect “record declines in economic activity” over the coming months.

Unemployment would likely rise to 10 per cent and remain above 6 per cent for years, he added, as restrictions and uncertainty weigh on spending.

But the economy will recover quickly as “a bridge has been built to get us to the other side” of the crisis, thanks to “the strong balance sheets of our governments, our private banks and of the Reserve Bank”.

The result of both the restrictions and the uncertainty is that over the first half of 2020 we are likely to experience the biggest contraction in national output and income that we have witnessed since the 1930s,’’ Dr Lowe said.

“[But] we can be confident that our economy will bounce back and that we will see it recover.

“We need to remember that once the virus is satisfactorily contained, all those factors that have made Australia such a successful and prosperous country will still be there.”

Dr Lowe offered similar forecasts to the International Monetary Fund – suggesting Australia’s GDP would decline roughly 6 per cent in 2020 if restrictions start to ease around the middle of the year “and are mostly removed by late in the year, except perhaps the restrictions on international travel”.

Under this scenario, the economy would bounce back in the September quarter, recover more quickly towards the end of the year, and go on to record GDP growth of 6 to 7 per cent in 2021.

Dr Lowe noted, however, that these numbers depended on how quickly restrictions were eased and “the resolution of the uncertainty that people feel about the future”.

“Whatever the timing of the recovery, when it does come, we should not be expecting that we will return quickly to business as usual,” Dr Lowe said.

“Rather, the twin health and economic emergencies that we are experiencing now will cast a shadow over our economy for some time to come.”

He added: “A strong focus on making Australia a great place for businesses to expand, invest, innovate and hire people is the best way of extending the recovery into a new period of strong and sustainable growth and rising living standards for all Australians.”

Dr Lowe also said the RBA had bought $47 billion of government bonds to drive down borrowing costs, and banks had so far drawn $3 billion from its $90 billion term funding facility aimed at struggling SMEs.

His speech came after new ABS data revealed more than 6 per cent of Australian jobs were lost between March 14 and April 4.

That amounts to roughly 781,000 job losses on top of the 718,600 unemployed Australians counted in last week’s labour force data.

The figures aren’t directly comparable to the official unemployment statistics for several reasons, but if the job losses did accurately reflect the number of newly unemployed Australians, then the unemployment rate would have reached 10.9 per cent.

That’s more than double the 5.2 per cent recorded on March 14, before non-essential businesses were shuttered and cafes and restaurants restricted to takeaway.

“The largest impact of net job losses, in percentage terms, was for people aged under 20, for whom jobs decreased by 9.9 per cent,” ABS head of labour statistics Bjorn Jarvis said.

The hardest-hit sectors were accommodation and food services, which shed more than a quarter of its jobs (25.6 per cent), and arts and recreation, which lost almost one in five (18.7 per cent).

Charting course back to normal

IFM Investors chief economist Alex Joiner said the figures were broadly in line with jobs expectations over the coming months, with Treasury previously forecasting the unemployment rate to hit 10 per cent this quarter.

Although the numbers confirmed the “economy had fallen off a cliff”, Dr Joiner said they would not provoke a major government response, as the initial $130 billion set aside for the JobKeeper program was enough to guarantee payments for up to six million employees.

The key focus for government now, he said, is to gradually ease economic restrictions without triggering a second wave of infections.

“It’s easy for someone who is in a relatively secure job and can work from home relatively easily to say, ‘Let’s keep the restrictions in place for an extended period of time’.

“But if you’re someone who has lost their job immediately … you are counting the days before things remain to normal.”