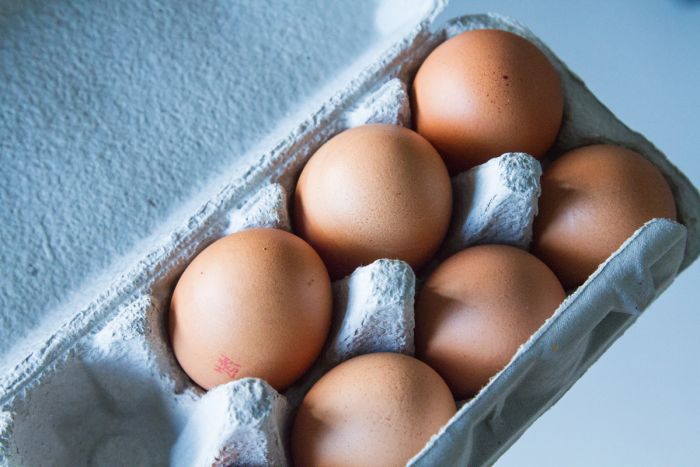 Egg prices are rising as the drought gets worse, resulting in higher grain costs for farmers. Jessica Hinchliffe

Major and smaller supermarkets are upping the price of eggs as chicken farmers become the latest casualties in the ongoing drought.

Egg producers are struggling to find affordable feed for their birds, as grain supplies dry up around the country.

Trish Simpson, whose family has run Murphy’s Crossing Free Range Eggs at Wasleys, north of Adelaide, for more than 60 years, said prices need to rise if her business is to survive.

“Have a look at what is happening to the poor dairy people, they have been screwed into the ground, and we are not far behind them,” Ms Simpson said.

“We’re questioning where we should be positioning ourselves just to survive and to actually get to the point where we might be able to retire.

“But at the moment that is looking very dim.”

The Simpsons avoid selling to large supermarket chains, but Ms Simpson said their business was still impacted by cheaper-priced alternatives.

“Why would customers who can buy eggs for $2.99 in the supermarket come to a specialty shop and pay $6.00 if they don’t have to?” she said.

“We are struggling to produce a really good Australian product for our customers.

“We have got a lot of people out there who are demanding quality, but they don’t want to pay for it.”

Ms Simpson’s comments come as pressure mounts on the supermarkets to pay farmers more for eggs.

“The price of grain has increased by more than double for producers and most of them have contracts with the retailers for six to 12 month periods,” EFA’s CEO Melinda Hashimoto said.

“It is difficult for producers to lock into contracts when they are not really sure what the price of grain will be.”

Grain accounts for about 65 per cent of variable costs for egg farming businesses, and the EFA is concerned those prices could skyrocket if the drought drags on.

Aldi and Coles said they have recently started paying farmers more for their eggs to factor in the drought.

“We have accepted price increases from our egg suppliers and, in turn, have raised the price of our egg range sold at Aldi stores,” Aldi said in a statement.

Coles said it had also accepted higher prices from farmers but would not say if those costs had been passed on to shoppers.

A spokesperson for Woolworths said “due to drought and high input costs, we’re currently seeing an impact on egg prices across Australia”.

“We will continue to manage discussions with suppliers in line with our established processes on a case-by-case basis.”

“[Supermarkets] obviously like to get the most attractive offer they can for their own customers,” Peter Bell, Western Australia’s largest egg producer, said.

“But obviously as farmers we need to live as well.”

One small Adelaide grocer said he was prepared to charge up to an extra 40 cents a dozen to help egg farmers, and believed consumers were prepared to pay more too.

“I have not done my numbers yet, but I daresay 30 to 40 cents [extra] should help that farmer quite substantially,” John Kapiris, director of St Bernards Fruit and Veg Market, said.

“I think 95 per cent of Australians at any retail outlet will be happy to pay that 30 cents [more] a dozen — guaranteed.

“I would like to say 100 per cent but there are always a few customers who are very tight, which is fair enough.”

Mr Bell agreed customers could handle a price hike, pointing to the milk industry as an example of consumers rallying at the checkout to support struggling farmers.

“There was that argument about whether consumers would be upset paying 10 cents more for a litre of milk,” he said.

“And clearly they didn’t have a problem because in the end the retailers did put up the price up by 20 cents.”

Eggs are about to cost more, with drought pushing up price of grain and production