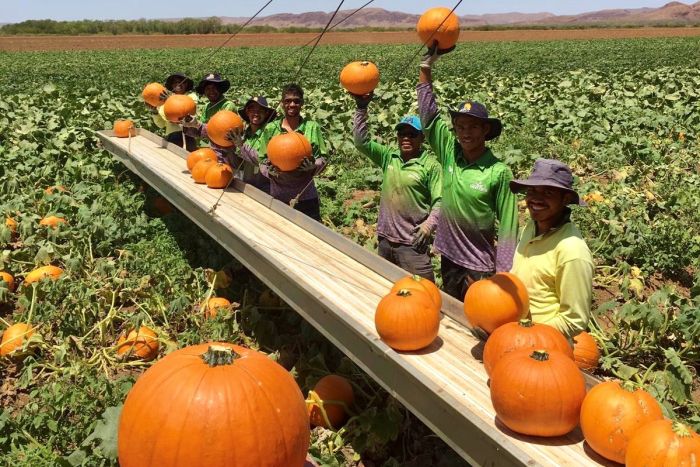 Halloween pumpkins have been trucked out of the Ord Irrigation Scheme to supermarkets around the country. Photo: Ceres Farm

Jack-o-lantern pumpkins, grown for generations in the United States, have only recently been carving out a spot for themselves in Australia’s niche Halloween market.

Staff at Ceres Farm in the Ord River Irrigation scheme of Western Australia have just finished picking and packing the jack-o-lantern pumpkins that arrived on supermarket shelves in every capital city last week.

Director Melanie Gray said what started three years ago as a fun experiment had turned into a unique side business for the farm located 3200 kilometres north of Perth.

“It’s definitely a niche market and you could very quickly oversupply it, so I don’t think it’s as big as over in America,” she said.

“But I do think there are a lot of people who do enjoy it [as] a nice family thing to do.

“I see the joy on the kids’ faces when you sit there and carve it out, so I can see how it could potentially become a bigger thing because of that family appeal.”

Ms Gray and her husband Matt are no strangers to the pumpkin business and have been growing butternut, grey and Japanese varieties for the Australian market for many years.

In 2018 Ceres Farm also exported pumpkins to Singapore for the first time, but Ms Gray said growing Jack-o-lanterns in time for Halloween had its own set of challenges.

She said that because the Halloween pumpkins were mostly for carving, getting the size, colour and timing of the crop right was important.

“It is definitely a risky crop. You have a deadline of October 31, so you need to make sure that everything’s sold before then,” she said.

“But I love doing something different and from the pickers’ point of view, I think they get really excited that they get to pick something lighter for a couple of days.”

Their Timorese seasonal workers have embraced the new crop and compete in an annual pumpkin carving contest that has become a tradition on the farm.

Ceres Farm is the second business in the Kimberley to enter the niche Halloween pumpkin market.

Rusty Dredge, a grower near Broome, has been growing Halloween pumpkins at Ginmore Farms for almost a decade.

In recent years his staff have picked up to 15,000 pumpkins for domestic customers, as well as exporting a small batch to Singapore for the first time in 2016.

And if pumpkin sales are an accurate guide, Halloween is steadily growing in popularity in Australia.

This year, Coles expects to sell 260 tonnes of Aussie-grown carving pumpkins sourced from Ginmore and Bowen.

Norm Moses has been wholesaling Halloween pumpkins out of Murphy’s Produce in the Sydney Markets for almost two decades.

He said the Halloween pumpkin trend first emerged in the early 2000s but had soared in demand in recent years.

“This year seems to be going quite well; so far we’ve sold about 10,000 kilos or 10 tonne of Halloween pumpkin,” he said.

“At the rate we’re going, we should sell another maybe 2000 kilos and that’s a lot of pumpkins considering they’re very light.”

Mr Moses said he was particularly impressed with the quality of the produce that had travelled long distances from northern Australia.

“We’ve got some coming out of Kununurra, Bowen and Mareeba [and] all very good quality,” he said.

“They get here in fantastic condition considering it’s so far away.

“It’s gone from being nothing to a big deal [and] as long as people want to have Halloween parties and there are Americans living in Australia, it will be a thing forever.”