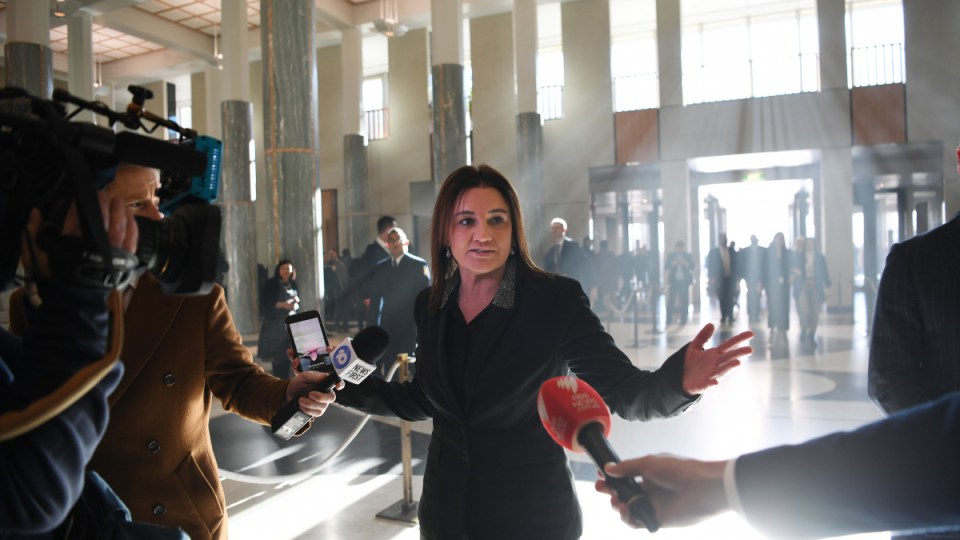 She’s back. Jacqui Lambie has returned to politics and Canberra, where her vote will decide the fate of the $158 billion tax plan.

“I was elected by the people of Australia, I work for them and it is to them that I answer,” she said.

“I am yet to arrive at a final position on the Coalition’s tax cuts.”

But she said it was time for the government to act on Tasmanian debt and to help those who would not benefit from tax cuts.

“People in Tassie are doing it tough and for them $1000 in their back pocket now will give them some immediate relief. But there are thousands of Tasmanians who are on the pension, Newstart and don’t earn enough money to pay tax – and they don’t see any benefit from a tax cut,” Senator Lambie said. 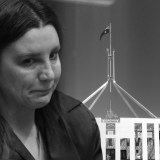 Jacqui Lambie goes for broke: Senator opens up about her struggles and comeback

“Tasmanian families are sleeping in cars, parks and tents – all in the dead of winter. Three thousand Tasmanians are on the housing waiting list.”

“Tasmania is paying 50 cents in every dollar of our state housing budget back to the federal government in interest and debt repayments. That means we are building half as many homes, helping half as many people. This at a time when the Tasmanian Treasurer is spruiking Tasmania’s ‘golden age’,” she said.

“The state Liberal government keeps talking a big game but they haven’t achieved anything in debt relief. At this rate we’ll be paying this debt for another 23 years.

“This time last year Tasmanian families were living in tents in the [Hobart] Showgrounds. It’s a year later and the situation has only got worse. They need help now, not in 2042.”

Senator Lambie said only wielding the balance of power in the Senate would bring real debt relief for Tasmania.

“That’s what I am here to fight for,” she said

“There is no way in good conscience I can vote for substantial tax cuts without making sure that the people who so desperately need a roof over their heads aren’t left to go without.”

Stage three of the government’s proposed tax cuts would reduce the 32.5 per cent tax rate to 30 cents. In combination with a previously legislated plan to abolish the 37 cent rate, it would deliver a top tax rate of 30 per cent for 94 per cent of workers.

The full tax plan passed the House of Representatives on Tuesday, with Labor voting for it but reserving the right to amend it in the Senate. The Senate will consider it on Thursday – with the government promising senators will sit until the package is passed.

Earlier on Wednesday, Senator Lambie repeated her call, first issued to The New Daily, for a clause in the legislation to ensure the future tax cuts would not be paid in 2024 if they are not affordable.

“They are five or six years away. We don’t know where the economy is going,” she said.

“I’m watching it play out. You know what politics is like … [it] changes more than what you change your undies.”

Just weeks ago, Senator Lambie delivered a warning to the Morrison government that it had not always treated her with respect in the past.

“You know what, Scott Morrison? If I am lucky and I hold that balance of power, I hope to God you and your people treat me a hell of a lot better than what they did in the three and a half years I was up here,” she said.

“Otherwise, mate, if I’m part of that balance of power, we’re going to have a lot of difficulty getting things through unless it’s going to cost you a lot of money – which is great for Tasmania because I’ll be able to deliver. You know what? Drop the attitude.”

Tasmanians know a thing or two about having to hand back half of every dollar to the Fed Govt to cover our $157 million social housing debt. So before we talk tax relief for rich people let's talk about debt relief for Tassie. #auspol pic.twitter.com/Y3MqCF73Kq

Labor: Surplus is a vanity exercise

Labor MP Ed Husic has also claimed that Prime Minister Scott Morrison’s pursuit of a budget surplus is “a vanity exercise” when the economy needs stimulus.

“They voted against economic stimulus that would make a difference now,” Mr Husic told Sky News on Wednesday. “All they are doing effectively, I think, is engaging in a vanity exercise.

“They don’t want to bring the tax cuts forward because they want to be able to declare a surplus. We’re not interested in political stunts, we need action now.”

Labor wants to bring forward the 2022 tax cuts to stimulate the economy, claiming to do so would not mean the budget remained in deficit. The move would slash the forecast $7 billion surplus in half.