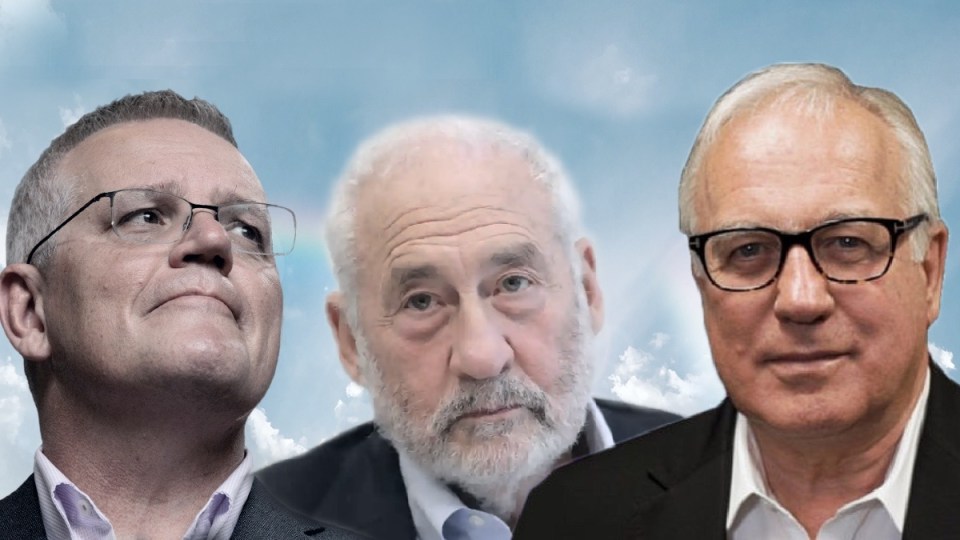 A simple desire to pay less tax is part of the conservative mindset, which will make it more persistent even if Professor Stiglitz is right.
opinion

He said the free market and small government ideology that has had America and much of the world in its grip for 40 years is over.

“This is a revolution. We are at a juncture in history where the tide has turned. Forty years of ideology of markets and experiments in many countries has failed. The last straw was COVID-19.”

By which he meant, among other things, that America’s market-based economy was unable to supply its citizens with masks and they had to get them from China. And the mRNA vaccine breakthrough was the result of government money, not private enterprise.

After a few more examples of market failure, he added that markets don’t account for risk effectively, which means they are not resilient.

“For example, Germany’s lack of attention to risk allowed it to depend on Russia for its gas. Now it, and the world, are paying a high price for that.

“Also, there’s the recent shortage of baby formula in the United States. We couldn’t even feed our babies! That was because one company had half the market and had to be shut down because its product was found to be unhealthy.”

When it came time for questions, my hand went up.

I said: “I wish I could share your confidence that a revolution is under way and that the extreme free market ideology of the past 40 years is behind us, but it seems to me very unlikely that the US is going to snap back to the policies of pre-Reagan Democrats like Lyndon Johnson or FDR.

“Isn’t it more likely that we are heading for a sort of hybrid system of free markets mingling with bigger government out of necessity?”

He more or less agreed, and then went off on what seemed like a tangent, but wasn’t: “The pandemic and climate change have shown that externalities are now first order, and that the only way to prepare for them is through government,” he said.

“Climate change will motivate most of the world towards a bigger role for government.

“Also the United States is in a new cold war with China, which will mean we can’t have free trade with an economy run on different principles, where you can’t trust that it’s really free.

“There will not be free trade with China, which is a big issue for Australia.”

The session ended, so no time for a follow-up statement/question, but I approached him afterwards.

“Professor,” I said, “I’m not sure the past 40 years was about ideology at all. I think what came first was cutting taxes. America became a plutocracy and still is, and when the rich got control through Reagan, they cut taxes. The philosophy of small government followed because it had to – with less taxes, the size of government had to shrink to accommodate, so they came up with that ideology to support paying less tax.”

Stiglitz was half out the door, and once again he agreed, up to a point, urging me not to dismiss ideology entirely.

Trust in god, or government?

The idea that tax cuts are the driver of small government ideology was reinforced this week when one of the candidates for Conservative Party leadership in the UK, Liz Truss, promised to cut taxes by £30 billion if she won.

Good grief – the UK budget deficit this year will be £128 billion and she thinks tax cuts will get her elected.

But then later on Wednesday I heard about Scott Morrison’s sermon at Margaret Court’s church in Perth.

Here is a transcript of the relevant bit (you can watch it on YouTube here):

“God’s kingdom will come. It is in his hands. We trust in him; we don’t trust in governments. We don’t trust in the United Nations. We don’t trust in all of these things, fine as they might be, and as important as the role that they play. Believe me, I’ve worked in it, and they are important. But, as someone who’s been in it, if you are putting your faith in those things, like I put my faith in the Lord, you are making a mistake. They’re earthly. They are fallible. I’m so glad we have a bigger hope.”

I thought: Hmm, maybe there is ideology at work here, and the push for small government isn’t just about greed and the urge to pay less tax.

Watching Morrison, I wondered whether other conservative politicians don’t trust the government they are elected to be in charge of. And is Pentecostalism, or any religion for that matter, inherently anti-government?

I consulted a former cabinet colleague of Morrison’s, who asked not to be named. We definitely don’t think that, he told me. “And Scott’s religion is bullsh-t,” he said. “He lies and dissembles all the time. It’s like mafia bosses going to Mass on Sunday.”

So, yes, maybe we shouldn’t take any of it too seriously, I thought, and after all, Pastor Morrison doesn’t seem to worry too much about the ninth commandment (thou shalt not bear false witness).

But it does seem American evangelicals are on the side of markets and small government, and political conservatism generally. I’m still wondering whether there is something broader and deeper going on: Is small government and free markets an entrenched, quasi-religious ideology?

So I consulted Professor Tony Coady of the University of Melbourne, one of Australia’s leading thinkers on philosophy, religion and politics.

“Morrison was incoherent on Wednesday,” he told me. “But small government is not just about the rich ripping off the poor. There is ideology at work here, and a lot of the free-market thinking has come from [Friedrich] Hayek, [Milton] Friedman and others and was picked up by political conservatives. I’m sure they also wanted to cut taxes, but the ideology came first.

“John Stuart Mill was one of the first to espouse a strong view of liberalism and restricting government, although he would be appalled at the current libertarianism. It was Hayek who effectively equated liberty with libertarianism.

“Morrison’s reference to ‘God’s kingdom’ was important, because that concept is embodied in the church. For Morrison and some Christian communities, the idea of God’s kingdom contrasts faith in God with faith in government, that to believe in God you need to stand against the kingdom of the world, which includes governments. I think this dichotomy is confused as an interpretation of the concept, which should be seen as more dynamically collaborative.”

Professor Coady said a lot of people believe that Thomas Hobbes was an atheist, but he doesn’t agree. The 17th-century philosopher was the most influential to propose the absolute authority of the state. Coady says Hobbes was firmly religious in an unorthodox way, as well as being in favour of strong, big government.

And John Locke, who stressed individual liberty, also had a strong role for government.

Then there’s Adam Smith, who is venerated by libertarians and conservatives.

“In fact,” Coady said, “Smith is usually very selectively quoted by his small state and glorified private enterprise admirers. But you probably know the great quote from Smith in The Wealth of Nations that they ignore:

“People of the same trade seldom meet together, even for merriment and diversion, but the conversation ends in a conspiracy against the public, or in some contrivance to raise prices.”

Which perhaps has some relevance to today’s burst of high inflation.
Anyway, Joe Stiglitz and Tony Coady did set me straight, and the obsession with tax cuts is perhaps part of the ideology – that less tax enforces small government.

But I still think a simple desire to pay less tax is part of the conservative mindset, which will make it more persistent even if Professor Stiglitz is right that government must get bigger.

This is relevant to Australia today because governments of any colour will get nowhere in the medium to long term if they don’t escape the low-tax dogma of the past few decades.

They have to find a way politically to get tax revenue above the Coalition’s arbitrary cap of 23.9 per cent of GDP, so they can pay for the services now demanded by voters without endless deficits.

In fact, I think a big part of the reason the Coalition lost in May is that they were stuck focusing on low taxes, and not enough on providing government services like the NDIS, aged care, health care and dealing with climate change. Especially dealing with climate change.
The Coalition’s climate ideas were hamstrung by Tony Abbott’s successful characterisation of emissions trading as a carbon tax, in the context that all taxes are bad.

And the alternative policy chosen by the Coalition was for the government to buy emissions reductions, but that was also hamstrung by insufficient government revenue.

So the Coalition’s climate debacle that led to its election defeat was essentially caused by its obsession with low taxation and small government, although they don’t seem to have figured that out yet.