A 141 per cent spike in wholesale electricity prices in the March quarter could have been avoided if the federal government joined the states in a concerted push towards renewable energy, experts say.

Energy regulator AEMO reported the figures on Friday, blaming in part breakdowns at coal fired power stations for the price spike, along with warm humid weather over summer on the Eastern seaboard.

It’s expected the electricity price spike will be passed onto consumers, a squeeze experts said could have been avoided.

“In large measure this was avoidable,” said Professor Bruce Mountain, director of the Energy Policy Centre at Victoria University.

“We could have decarbonised quicker and those states that did, Victoria and South Australia, have been feeling much less pain than those that have made less progress.” 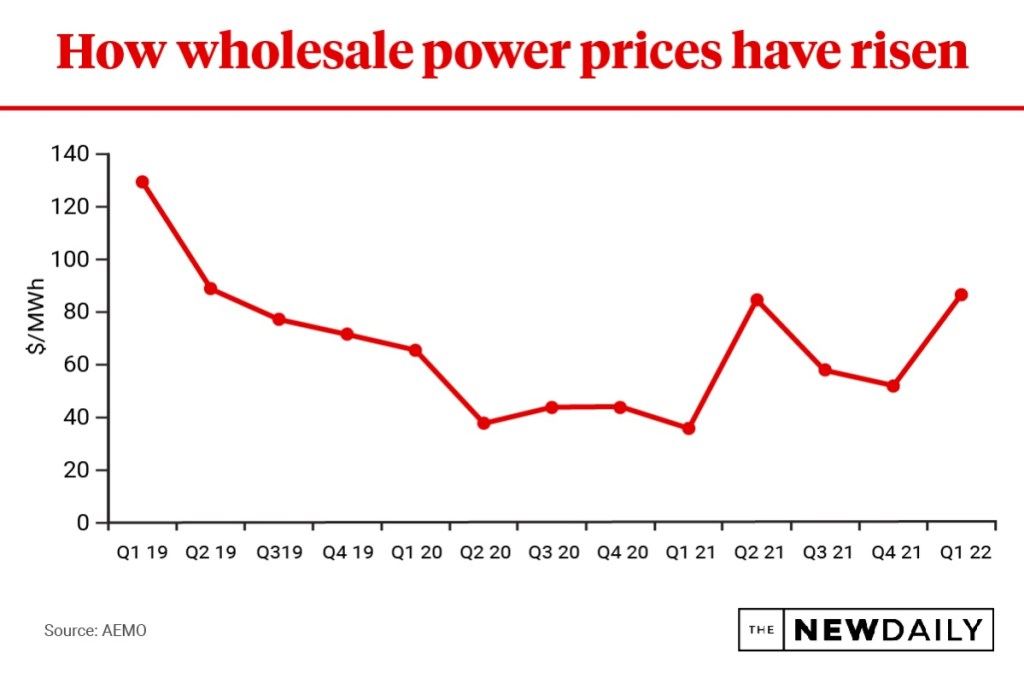 AEMO’s figures showed that Queensland averaged by far the highest prices of the mainland states, at $150 a megawatt hour with NSW second at around $82 mw/h, South Australia third at around $60mw/h and Victoria recording average prices of $55 mw/h.

All states recorded significant increases on those seen in both the March and December quarters of 2021.

“It’s evident that gas and coal fired generators have been substantially rebidding their capacity just as they did after Hazelwood [a Victorian generator] closed,” Professor Mountain said.

“It amounts to generators cornering the market when they can.” 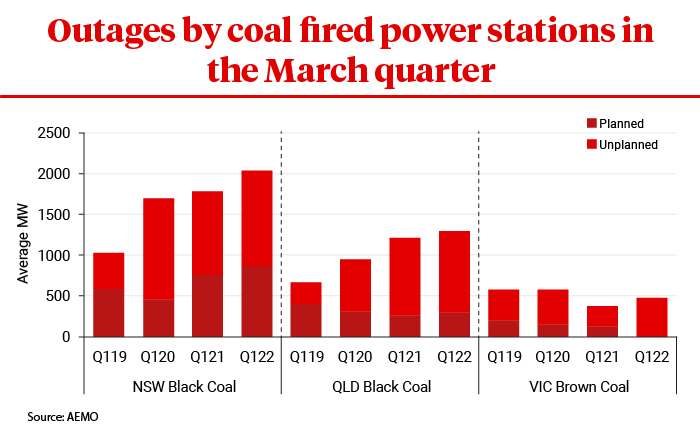 Rebidding is where generators move their bids into the electricity market higher for part of their output.

It has the effect of pushing up prices for the market in general and can only be done when supply is squeezed.

The best response to breakdowns at old coal generators was to replace them more quickly than planned, said independent economist and Climate Council member Nicki Hutley.

“Recent years have seen massive investments in wind and solar generation in the national electricity market,” she said.

“We just need to use the technologies that we’ve got – wind and solar and put in batteries.”

The states have strong renewable energy programs in place but the Commonwealth was dragging the chain through lack of support and dissent in its ranks over moving to net zero emissions.

Earlier in the week maverick Queensland Nationals MP Matt Canavan said “the net-zero thing is all sort of dead anyway”.

“You hear consistently when you talk to companies that they are more cautious and are holding back on some projects because of the federal government’s lack of commitment – lack of clear policy,” Ms Hutley said.

“The states are rowing in one direction and the federal government in the other.”

The move to renewables could be speeded up without huge amounts of financial support from the Commonwealth, Professor Mountain said.

It could assist, he said, “with broad based storage incentives”.

“We only need one megawatt of storage for every three megawatts of wind and solar,” Professor Mountain said.

An expansion of renewable generation and the connecting lines and storage necessary to make it work would enable coal generators to close earlier.

AGL’s Loy Yang A station in Victoria is scheduled to close by 2045 but AEMO has said this could be moved forward to 2032 in the right circumstances.

“What you could see is all the coal fired power stations in Victoria could go by 2032 provided you did what you needed to do to maintain the stability and reliability of the system,” said Tony Wood, energy program director at the Grattan Institute.

While the owner of Loy Yang A, AGL Energy, believes it is likely to keep running to 2045 given current conditions, unsuccessful bidders for the company recently said this could be cut back significantly.

“Mike Cannon-Brookes [the tech billionaire who led the bid] said he could bring forward the closure to even as early as 2030 without threatening reliability of supply,” Mr Woods said.

However the slow move to renewables so far would be felt throughout the community.

“Unfortunately we are being held hostage to some degree by our failure to have got on with it quicker. Households and businesses are now going to be taking quite a hit from this,” Professor Mountain said.

Wholesale prices account for 30 to 40 per cent of consumer electricity bills and consumers would soon be feeling the effects of the rising wholesale price, Mr Wood said.