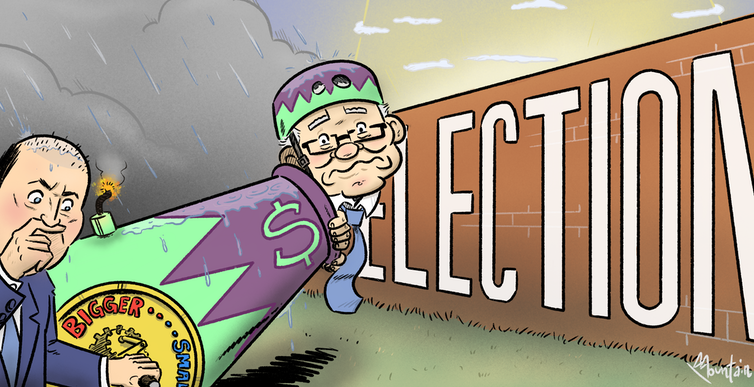 What economists want from the federal budget next week. Photo: Wes Mountain/The Conversation.

They are also dead against rumoured cuts to petrol tax and the tax on beer.

The Conversation’s pre-budget survey of a panel of 46 leading economists selected by the Economic Society of Australia finds almost half want a budget deficit smaller than the $99.2 billion expected for 2021-22 and the $98.9 billion forecast for 2022-23 in the December budget update.

Higher commodity prices and lower-than-expected unemployment – which is lifting tax revenue while also cutting spending on benefits – is set to produce a deficit tens of billions of dollars lower, perhaps as low as $65 billion, absent new spending.

But a substantial chunk of those surveyed (41 per cent) want an unchanged or bigger deficit to boost spending in other areas, including an accelerated transition to net-zero carbon emissions and Australia’s defence.

Arguing for a deficit about as big as last year’s, former OECD official Adrian Blundell-Wignall said while spending on defence was important, so too was spending on supply lines to make Australia less dependent on other countries.

Events in the Ukraine showed supply chains were as important as weapons.

Curtin University’s Margaret Nowak said the huge reconstruction needs following the floods in New South Wales and Queensland suggested there was no potential to reduce the deficit and good reasons why it might climb.

Arguing with the majority in favour of a lower deficit, independent economist Nicki Hutley said the government should bank rather than spend any improved position to reduce debt ahead of higher interest rates.

It would need “reserves at the ready” to deal with economic and geopolitical uncertainty.

James Morley of the University of Sydney said with the economy on the road to recovery, more government handouts would be likely to be inflationary, making it harder for the Reserve Bank to keep inflation within its target band.

Asked to pick up to two spending or tax bonus measures from a list of 12 that would most deserve a place in the budget, more than 60 per cent of those surveyed nominated spending on the transition to net-zero carbon emissions.

University of Adelaide economist Sue Richardson said if she had the option, she would have picked “remove all subsidies to fossil fuels”.

More than 90 per cent of Australia’s energy now comes from fossil fuels.

Reducing that – as the government has said it expects to do to get to net-zero emissions by 2050 – will require a massive effort, “made much harder by starting so late”.

More than 32 per cent of those surveyed backed increases subsidies for child care, in part because it would allow more parents to do more paid work.

Saul Eslake said “gimmicks” such as cuts in beer or petrol excise failed to address the reality that Russia’s invasion of Ukraine had serious economic consequences for Australia, including reducing national income. Governments can’t “pretend this hasn’t happened”.

Instead, what governments could do was ensure Australia’s lowest earners don’t bear the brunt of that economic pain.

The best ways to do this were temporary increases in social security payments, or a one-off special payment, and tax rebates for genuine low earners.

Eslake would fund them from the extra tax that will flow from the companies and shareholders who will benefit from the higher commodity prices following Russia’s invasion.

Given Australia is experiencing a near-five-decade low in unemployment, and unprecedentedly high number of job vacancies, he said it was hard to justify a higher rate of JobSeeker.

Also high on the list of measures panellists felt should not be adopted were further company tax cuts (21.7 per cent) and bringing forward the Stage 3 tax cuts directed at high earners and due to start in July 2024 (21.9 per cent).

The budget will be delivered on Tuesday night.

Cut emissions, not petrol tax; support child care, not beer. What economists want from the budget