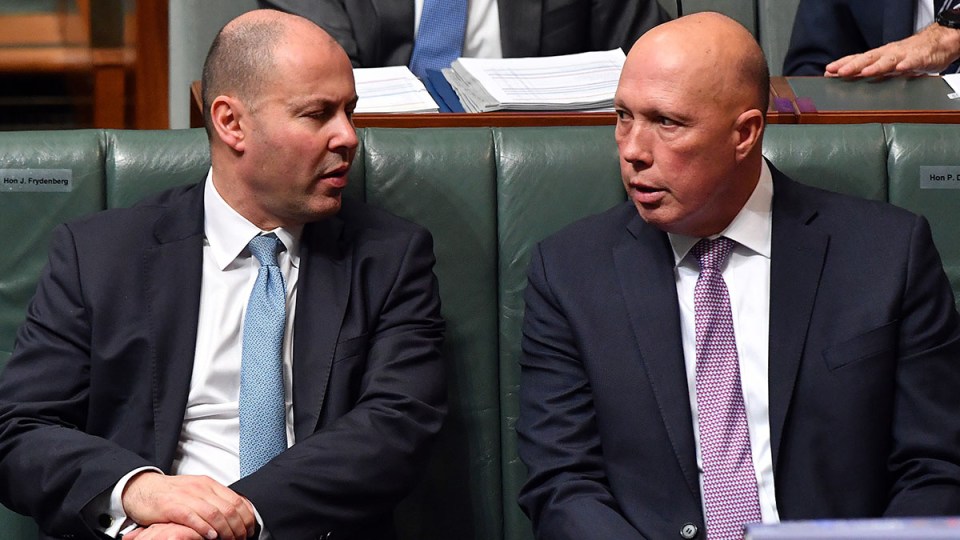 It takes a certain chutzpah to call black white with a straight face, but that’s what the two men competing to take over the Liberal Party leadership are doing.

Treasurer Josh Frydenberg has a particular hide to boast of providing tax cuts for young women while also warning that the main tax break for them won’t last.

“The low- and middle-income tax offset is not a permanent feature of the tax system. We’ve introduced it due to the particular economic circumstances of the time,” he said.

OK, Mr Burgess did not actually say his boss was “full of it”, but in explaining that attempts at foreign influence occurred on all sides of politics and all levels of government, it’s pretty much what he meant.

In my opinion, either Mr Burgess or the alleged sources, especially those dripping from the parliamentary intelligence and security committee, are full of it – and I don’t think it’s the ASIO chief in Senate estimates on this occasion. After all, the influence story he was telling was rather fanciful anyway.

Applying a little perspective, the reality of the Frydenberg/Dutton performances has been spelt out in decades of opinion polling: Conservative parties are playing to their perceived strengths when they campaign on economic management and national security.

Both claims are highly dubious, which adds to the need to ramp them up hard, spinning every which way.

A Jim Hacker Yes, Minister diary entry is apposite: “A good political speech is not one in which you can prove that the man is telling the truth; it is one where no one else can prove he is lying.”

Mr Frydenberg has form in twisting black-and-white numbers to extract a shade of grey.

Under fire for gifting billions of JobKeeper dollars to businesses and private schools that increased their profits, the government turned to boasting about how much had gone to its electorates.

“Liberal backbenchers are now tweeting the amount of JobKeeper paid to businesses in each of their own seats,” the Australian Financial Review’s Joe Aston reported in one of several excoriating columns on Mr Frydenberg’s performance.

“That’s right, having refused to release any meaningful information relating to the JobKeeper program (that’s only come from the independent Parliamentary Budget Office), the Morrison government has prevailed upon the Treasury to break down JobKeeper spending by electorate.”

Similarly, Mr Frydenberg’s latest effort in torturing data to maximise apparent tax cuts for young women is his second bite of the same cherry, previously spinning for “younger Australians” gaining “$11 billion from personal tax cuts over the past three years, netting some of the biggest benefits across all age groups”.

A moment’s thought would screen the claim for the high proportion of the workforce aged 25 to 34 and that most of the “benefits” for young people came from the low- and middle-income tax offset (LMITO) – the temporary handout only extended by the COVID crisis and now potentially scrapped.

(Mr Frydenberg has largely got away with claiming each extension of the LMITO as a new cut with each budget. I’d bet he’s about to do that again with the current window dressing designed to make it look like fresh largesse.)

Similarly, ramping up the cliches about Labor being high taxing – contrary to the reality of tax revenue as a percentage of GDP since the days of the Howard government – is becoming more urgent after the Guardian Essential poll indicated Australians aren’t so easily fooled anymore.

Handling the pandemic meant having to admit that the Coalition had been lying for all those years of about how scary “debt and deficits” were.

Peter “McCarthy” Dutton leading the sabre rattling at least still has the dubious benefit of public security perceptions. Decades of “Red Menace” and a little “Yellow Peril” dog whistling has paid off.

Historically, it’s much harder to justify.

It was the Menzies Liberal government that asked to go to war in Vietnam, conscripting young Australians to fight and die on the wrong side of history. Labor opposed the war and ended our involvement.

And it was the Howard Liberal government that chose to believe – or at least pretend to believe – the Iraq “weapons of mass destruction” lie, enmiring Australia in another disastrous conflict. The Crean Labor opposition opposed Australian military involvement.

(If you take defence and security seriously, you’ll spend what you need to spend, not a percentage of a variable number.)

But don’t let facts get in the way of preconceptions when they are what the Liberal Party is hanging its electoral hopes on.

And the most successful spinner has the best chance of succeeding Scott Morrison as the party’s parliamentary leader.