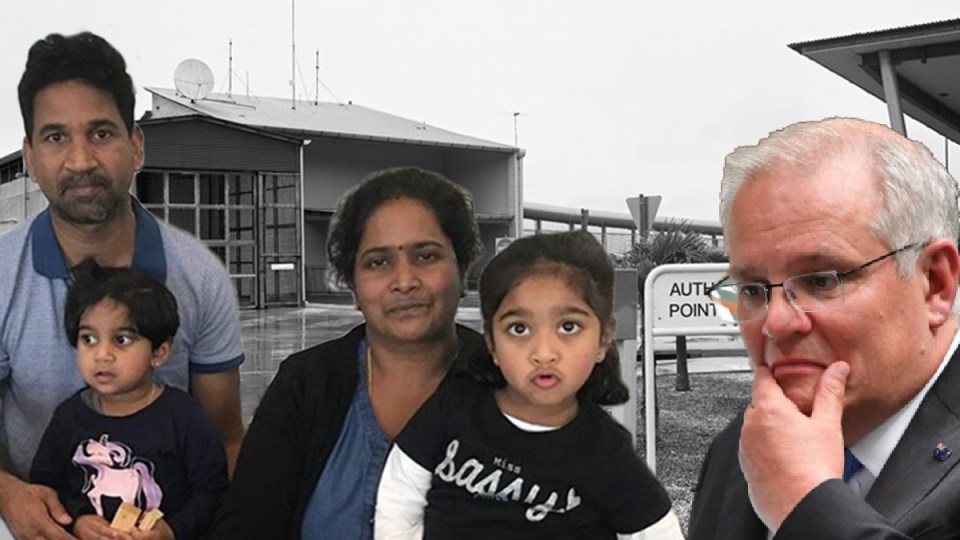 A decision on the Biloela family's future is likely to occur before the election, Michael Pascoe believes. Photo: TND
opinion

The good news: I’m quietly confident the Biloela family will be “home to Bilo” before the election.

The bad news: They should have been there years ago.

The despicable news: The timing of their release is being delayed for political theatre, the staging of a “Liberal moderates acting tough, achieving change” pantomime.

Spoiler alert if you intend to watch the show, but it starts with “leaks” of Liberal moderates “working” to allow Priya, Nades, Kopika and Tharnicaa to return to the country town from which they were snatched in a dawn raid four years ago next month.

The stories with anonymous sources will be followed by brief grabs from the most likely moderates – Trent Zimmerman and Katie Allen – carefully saying, well, stuff like they publicly said in June when the immediate issue was allowing the family out of their Christmas Island jail after four-year-old Tharnicaa had been medevac’d to Perth:

“We urgently need a timely resolution to a situation that is endangering the health and well-being of innocent children,” tweeted Dr Allen.

“I think it’s time we brought this to an end and brought them back to the mainland here,” Mr Zimmerman told the ABC.

Hard-hitting, no-holds-barred statements, those. (I’d take a small wager there had already been a wink and a nod, that the decision had already been quietly taken that the rest of the family was going to be allowed to go to Perth.)

Immigration Minister Alex Hawke and Home Affairs Minister Karen Andrews have been hiding behind the lie that their hands are tied by the family’s ongoing legal saga.

It is simply not true.

As the Djokovic farce demonstrated, the Immigration Minister can do pretty much whatever he wants with visas.

Beyond vindictiveness, cruelty for the sake of cruelty, and the danger of embarrassing those responsible for the mistake of the original unnecessary raid and tens of millions of dollars blown since, there is no reason the family can’t be allowed to home to Biloela.

When the political news cycle is considered most ripe, it will be announced that, while setting no precedent and in total confidence that the Australian government has acted correctly at all times, as a once-off humanitarian gesture for the young Australian-born girls, they will be allowed to stay.

Cue acknowledgement of representations by Mr Zimmerman, Dr Allen and other moderates facing strong independent candidates in the looming election.

Why be confident it will happen? Because it will reflect the findings of the combined push-polling/message-honing ‘surveys’ the Liberal Party is conducting in Mr Zimmerman’s seat of North Sydney.

Community policy development by the independent candidate, Kylea Tink, has already found “the Biloela family” is a hot button in the electorate.

And we’ve just had another example of the process – the granting of a few crumbs for the ABC and a promised end of the indexation freeze it has suffered.

It might have been a coincidence that an Australia Institute poll published on January 29 found very strong support in North Sydney and Wentworth for restoring the ABC’s funding and the government announcing a little more cash for the ABC a bit over a week later. Might have been.

The issue of a strong ABC is another that resonates in the well-educated electorates that are promising to be genuine battles between “moderate” Liberals and community independents.

It is a feature of the times that the government got lucky with its ABC media release on Tuesday – in nearly every case, it was reported without perspective or analysis.

“The Morrison government has locked in committed and growing funding of $4.2 billion for the ABC and SBS” over the next three years sounds good – but it’s risible.

Josh Frydenberg spends the better part of that building a 90-space ‘carpork’ in his electorate.

And, as usual, it’s not even as good as it looks. After the years of frozen indexation, the promised 2.7 per cent increase will barely touch the sides.

The return to indexation “outlined in the May 2021 budget papers” is by no means clear either.

The promised $29 million “increase” will be only $20 million more than this financial year’s budget – exactly the cost of a Kooyong carpork.

The ABC’s reaction to the announcement looks like a case of feeling better when someone stops smashing your head into a wall, ever since Tony Abbott started cutting the broadcaster’s funding after promising he would not.

The government regularly spins figures and fibs the way the government does to claim ABC funding hasn’t been cut. Alan Sunderland, a former head of ABC editorial policy, tweeted a suitable parable:

Once there was a man who had a son. On the son’s 10th birthday, the father said he’d be giving him $1 a week pocket money in return for doing chores, and it would go up by 20c a week every year on his birthday.

Thanks, said the son.

However, before the first year ended, the man decided to cut his son’s pocket money from $1 to 80c.

Do I still need to do all my chores, asked the son?

Yes, said the man. In fact, I want you to do more with less.

Then came the boy’s 11th birthday, and the man announced his son’s already reduced pocket money would only be going up by 5c a year instead of 20c.

Why are you cutting my pocket money again, said the boy?

It’s not a cut, said the man, because it’s still going up every year.

The boy looked at his father and thought about the broken promise and looked at the 85c in his hand that should have been $1.20.

The man said he would now start increasing the pocket money by 20c again each year.

But the boy could count, so he knew better.

And it was just a promise.

And that is a clearer reporting of the government’s ABC funding change than anything else I’ve read.

What’s more, the voters of North Sydney and Wentworth can count.