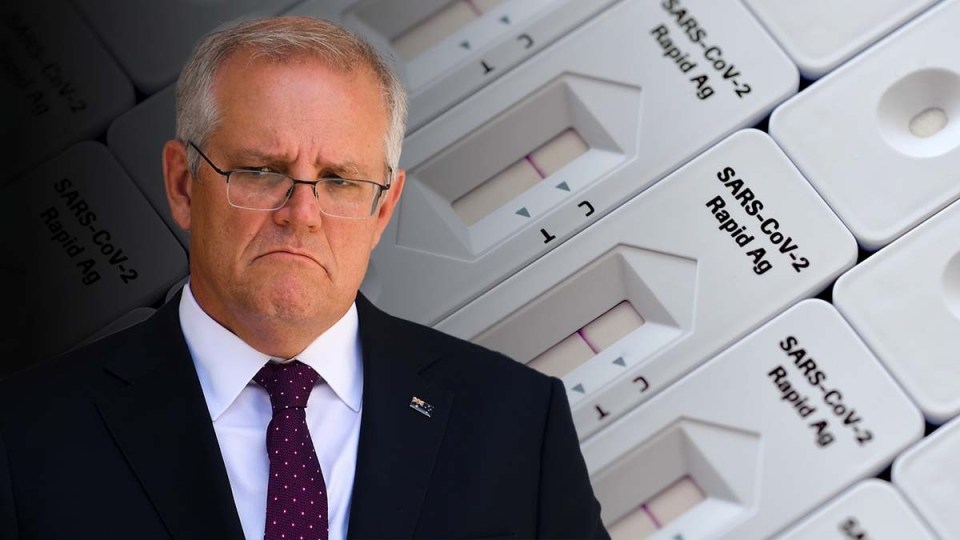 Prime Minister Scott Morrison has found himself in hot water over his stance against providing free rapid antigen tests (RATs).

On Monday, Mr Morrison doubled down on the federal government’s decision not to supply free RATs despite Australians complaining of major shortages and price hikes in the private market.

“We’ve invested hundreds of billions of dollars getting Australia through this crisis,” he said.

“We’re now at a stage of the pandemic where you can’t just make everything free, because when someone tells you they want to make something free, someone’s always going to pay for it and it will be you.”

But Opposition Leader Anthony Albanese, as well as experts across various industries, said it was “unbelievable” that the government had told people to test themselves at home with a tool that is expensive and often unavailable.

Leading economists said the government can afford to buy hundreds of millions of free kits while epidemiologists said the measure was key to preventing and tracking the spread of COVID-19.

Dr Holden said taking a RAT not only benefits the person taking it but society as a whole.

“It’s a classic example of a good which has, what economists call, a positive externality,” he said.

“And almost any good you can think of that has a positive externality – education, public parks, lots of other things – we subsidise as a society.

“Rapid antigen tests are no different.”

“If [rapid antigen tests are] too expensive for Australians who are struggling getting food on the table, they’re not going to be thinking about doing these tests,” Professor McLaws said.

She said case numbers would be underreported if people were unable to access RATs and failed to meet the new definition of a close contact.

So far, hospitals in New South Wales have been hit the hardest, with more than 1200 people admitted to the state’s hospitals with COVID-19 and 95 of them in intensive care.

Hospitals in Victoria are also struggling, with public hospital management organisation Western Health putting out a plea on Twitter for people with mild COVID-19 symptoms to avoid attending emergency departments which are under “extreme pressure”.

The federal government is set to discuss possible subsidies for concession card holders during this week’s national cabinet meeting, but Health Minister Greg Hunt said an “unconstrained flow” of RATs would result in demand not being met.

Why is the government not budging?

Dr Holden said the government’s reluctance to give free RATs to the general public could be put down to a “lack of thinking ahead at all stages during the pandemic”.

“I think there’s nothing much more to this other than the fact that they didn’t order them, they don’t have them,” he said.

“And so it’s going to be really hard for them to hand out for free something that they don’t have.”

Dr Holden said he was confident that if the government had ordered more RATs months ago, when other countries such as the UK and Singapore started giving them out for free, Australians would be enjoying free testing kits as well.

So far, Victoria and and New South Wales have been the biggest spenders on RATs and are considering handing them out for free, having ordered 34 million and 50 million tests respectively.

The ACT will also buy about one million RATs at cost from New South from January 17.

Meanwhile, Mr Morrison has pointed to the hundreds of billions of dollars that the Commonwealth has already spent during the pandemic as one of the reasons it can’t hand out RATs for free.

But Senator Patrick said it was “disgraceful” that the Prime Minister was “not prepared to spend money for the health of Australian citizens” when his government had handed out tens of billions of dollars in JobKeeper payments to businesses that did not need the money.

Is the cost of free rapid antigen tests worth it?

Professor McLaws said testing, when combined with masks and home-isolation when required, would have a “great impact” on stopping the spread of COVID-19.

The cost of PCR testing is about $85 per test through private pathology labs and about $51 per test through public laboratories, which would have been expensive for the federal government over the past two years, she said.

But RATs would come at a much lower cost.

If the government was to bulk-buy them, the price could come down to about $5 each, she said.

“That saving would be quite remarkable,” she said.

Dr Holden agreed that free RATs would be “incredibly cheap” to provide.

He said 400 million tests at $5 each would cost the country about a couple billion dollars.

“It isn’t something that’s going to be done every day for all eternity, it’s something done during the midst of a massive outbreak.

“The government should always make investments that have a really large social benefit when they’re available, and this is one of them.”