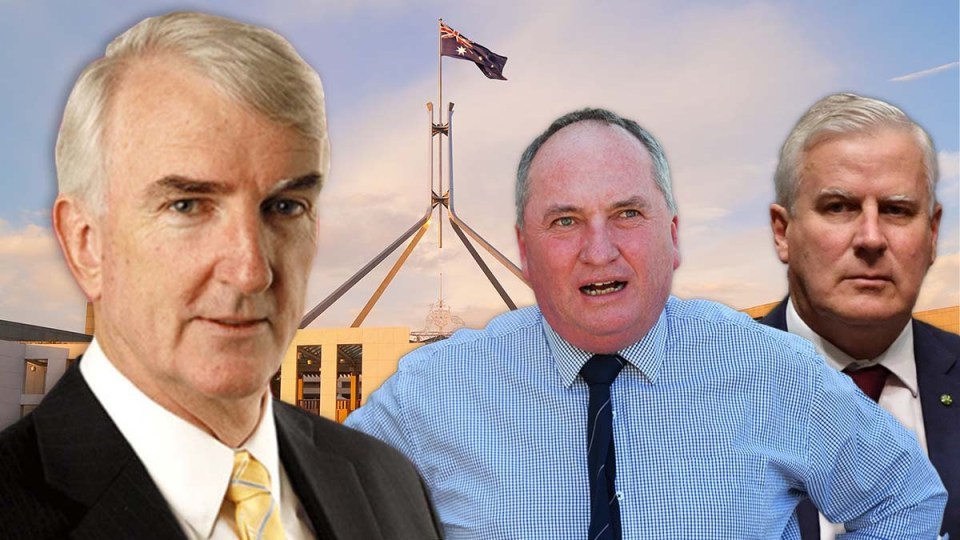 What we don’t generally see is the disheartening flipside – the “opportunity cost” of needs unmet because of politicians’ preferences.

As treasurers and finance ministers normally remind us, the government doesn’t have an unlimited supply of money. When one project receives funding, it’s often at the expense of another project that doesn’t.

When a government plucks, say, $660 million from the “#carpork” barrel in the shadows of an election for key seats, that is money that won’t be available for women’s shelters or child care or fair wages for aged-care workers.

Australia now is in the shadow of an almost unimaginable extortion racket – “tens of billions of dollars” for the National Party to agree to minimal carbon reduction promises Scott Morrison can take to Glasgow.

According to the Australian Financial Review, that’s the scale of the money on offer to get the Nationals’ Princes and Princesses of Pork across the climate change line.

“Sources said “tens of billions” were on the table,” reported Phillip Coorey.

“Infrastructure and communications would be the chief beneficiaries of any negotiation which, they noted, would also bolster the electoral prospects of regional Liberal MPs.”

Particularly given pressure on the government to wind back its COVID-driven deficits and the government’s pledge not to increase taxation, not to mention its open chequebook for defence, the suggested extra “tens of billions” would have to come out of other programs cut or forgone.

In the context of the current ICAC hearings that have come out of the Berejiklian government’s shamelessly political $250 million pre-election council grants, Democracy Matters director Sandy Killick reminded SMH readers:

“There is a real consequence of ministers using their discretion to divert millions of dollars to electorates of their choosing, over many years.

“The current NSW parliamentary inquiry into rural, regional and remote hospitals has been told that patients can’t be treated properly because morphine and paracetamol supplies run out.

“In November last year, midwives and senior obstetricians at Blacktown Hospital threatened to strike after a sixth baby died in two years in a maternity ward that is chronically understaffed. These things were happening before our valiant public health system was stretched by COVID-19, and it will need every dollar the state government can send its way.”

An obvious test of a government’s integrity is that it impartially makes the best use of public money for the public good, not to buy votes.

The Pork Party already has plenty of form. The threatened carbon promise bonanza is a matter of different scale, not different behaviour.

If Barnaby Joyce succeeds in getting $3 billion to extend the Inland Rail boondoggle to Gladstone to subsidise coal exports, that’s $3 billion that won’t be spent on solving genuine problems.

That was on display in miniature in Bridget McKenzie’s #sportsrorts scandal.

The money the Pork Party’s Senate leader gave to less-deserving clubs came at the expense of more-worthy projects. As everyone in the country except government members knows, that was not fair, it lacked integrity.

To a greater or lesser degree, there seems to be the whiff of pork around every program the government touches, especially if the Nationals are closely involved.

Pork received a fresh airing last week with the breakdown of the Building Better Regions Fund Round Five winners – eligible Labor electorates disproportionately underfunded and some “interesting” grants. Anyone for pickleball?

We have previously reported on the BBRF rorting thanks to spreadsheet sleuth Vince O’Grady. Further information has come to light about Rounds Three and Four thanks to Freedom of Information documents uploaded to the Finance Department’s disclosure log.

The FOI requests deal with ministers making grant decisions that were not in keeping with their departments’ advice. It’s a rich trove.

Others occasionally – Michael McCormack, as the relevant minister for the BBRF – often.

In Round Three, 112 of 330 grants – 34 per cent – were chosen by McCormack’s ministerial panel against the department’s recommendations.

(And, true to form, only 12 per cent of the $197 million in the  infrastructure stream went to Labor electorates.)

Many of the grant recipients sound like very deserving and commendable projects. For example, $200,000 toward the cost of refurbishing “55-year-old bathroom facilities in 36 aged pensioner units to meet Workplace Health and Safety standards’ in Wondai’s Talbot Estate in Ken O’Dowd’s LNP seat.

Others are perhaps less obviously worthy. Was it necessary for the federal government to provide $85,363 for the Lorne Bowls Club to upgrade its green and surrounds in the seat of Corangamite? Sarah Henderson lost to Labor anyway.

Or $1.35 million to upgrade boat ramps for recreational fisherfolk in George Christensen’s Mackay?

Or $800,000 towards stables for 60 horses at the Hunter Valley Equine Research Centre? The thoroughbred industry already does very well indeed out of governments – but this is in Barnaby Joyce’s electorate of New England.

And then there are the effective gifts for what are commercial enterprises. Sales yards, of “livestock exchanges”, are popular, picking up collective millions for upgrades while livestock prices soar.

The $400,000 for the Apple and Pear Growers of South Australia to subsidise their water pumping stations?

Or $2,250,000 towards 218 kilometres of the Murchison Region dog fence in WA, effectively a gift to 53 privately operating pastoral stations.

That is the unknown opportunity cost, the unheard failures involved in grant rorting.

Oh, the then-deputy PM assures us all projects represented value with the relevant money – but were they the best value?

That’s a question of integrity to consider before letting the Pork Party get its hands on “tens of billions”.

Michael Pascoe: The opportunity cost of the Pork Party – ‘tens of billions’