Analysts have warned investors not to make quick returns in the CBD. Photo: TND/Getty

The top 10 areas to avoid buying an apartment in Australia have been revealed, with inner-city suburbs taking out the top spots.

Data released by RiskWise Property and CoreLogic showed CBD and CBD-adjacent areas took up eight of the top 10 suburbs suffering from an oversupply of apartments.

BuyersBuyers CEO Doron Peleg said investing in city apartments has long been a “substantial risk”, particularly when buying off the plan.

The pandemic has only heightened the risks, as closed international borders and an exodus of people moving to regional areas has eroded demand for inner-city pads.

Popular inner-city suburbs in Victoria, New South Wales, Western Australia and South Australia have a surplus of small apartments, with more on the way.

Mr Peleg said oversupply has been a long-standing issue in these areas as property developers looking to make the most of expensive land have focused on building small apartments for years.

This has caused supply to exceed demand, especially during the pandemic. 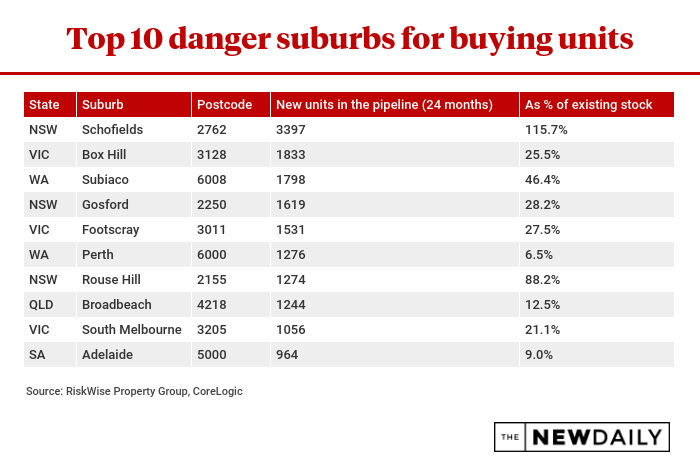 Mr Peleg said people should be wary of buying apartments in the 10 listed suburbs, as they come with a higher risk of rental vacancies and capital loss.

Only two of the top 10 are found outside CBDs: Gosford in New South Wales and Broadbeach in Queensland.

Mr Peleg said it was “very surprising” that Gosford, a suburb 76 kilometres north of Sydney, made it onto the list.

He said the suburb had attracted property developers thanks to increased interest in the Central Coast along with some zoning changes.

However, he found the inclusion of Broadbeach in Queensland unsurprising.

He attributed it to a “consistent trend” on the Gold Coast of demolishing freestanding houses for apartments, leading to excess supply.

Overeager investors are also paying “outrageous” apartment prices there due to limited knowledge of the area, he said.

He said some Gold Coast vendors had sold property well above its true value to Sydney investors, who didn’t have “the foggiest idea” what they were doing and based their offers on Sydney prices.

Mr Peleg said Gold Coast vendors were able to sell properties valued at $1.3 million for about $1.68 million to inexperienced but aggressive buyers.

“That’s the reason the market is booming,” he said.

“They’re absolutely confident that they bought a bargain.”

Top 10 areas in Australia to avoid buying an apartment revealed