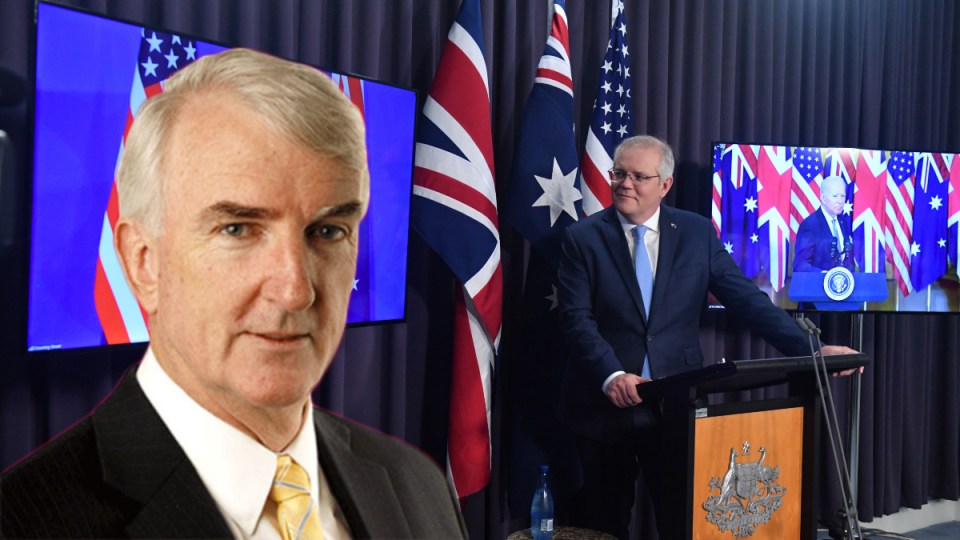 Australia’s nuclear-powered submarine policy was not an immaculate conception. Put another way, submarines are not just bought – they are also sold.

Coverage of our botched and bungled defence spending – culminating as it has in multiple diplomatic failures, writing off billions of dollars on French submarines and announcing open cheques for British and American manufacturers – has tended to treat the latest sorry saga as if it was all Scott Morrison’s idea.

A moment’s thought about Mr Morrison’s skill set and that of the Coalition’s revolving door of defence ministers should put that to rest.

Whether it’s a federal contract for photocopying machines or submarines, there are armies of salespeople and lobbyists at work. And navies of them, too.

Given the size of the mega-contracts tossed around by Defence, they are always working hard in multiple ways, not the least of which is offering ideas, proposing “customer solutions”, using contacts, being helpful, smoodging, lobbying, positioning.

It’s not necessarily altruism that has the obvious suspects donating to the War Memorial and the Australian Strategic Policy Institute.

Contrary to all the reporting, the British and American governments won’t be selling Australian nuclear-powered submarines.

BAE Systems, for example. It’s a company so embedded in the Australian government that it doesn’t even bother to employ a lobbyist – or at least it doesn’t show up as a client of a lobbyist on the government’s lobbyist register.

It has been in BAE’s interest – along with that of its American partners such as Northrop-Grumman – to suggest Australia would be better served by having nuclear-powered submarines than the diesel-powered we supposedly thought superior just a few years ago.

For the Anglo-American arms salespeople, the French Naval Group is the enemy.

If a diplomatically hapless American client state can be convinced to kneecap Naval’s biggest international contract, that is winning a sales war.

Despite efforts to recruit local influencers – ASPI chairman and former Chief of Army Ken Gillespie was appointed as an independent director of Naval Group Australia – the French are relative outsiders in the cosy Australian defence government/industry amalgam.

For a start, they speak the wrong language. As the Five Eyes group and last week’s Biden/Boris/Thatfella show demonstrated to the world and particularly Asia, we’re first, foremost and always Anglo.

Having started, the French were a long way behind on the embedded status that comes from industry/government fungibility.

BAE was not only already in the door, it’s building the walls as Australia’s biggest defence company with, among other things, the $35 billion frigates program.

One of the other four members and chair of the future submarine evaluation panel was Professor Donald Winter, head of Northrop-Grumman Mission Systems until President Bush nominated him as US Navy Secretary in 2005, a position he held until 2009.

“The advisory board will provide expert, independent advice to government on all aspects of naval shipbuilding as plans are finalised for establishing and sustaining a viable, continuous naval shipbuilding capability in Australia,” Mr Pyne said at the time.

In March this year, the board was abolished.

The ABC reported a new cabinet committee had been formed, chaired by the Prime Minister, “to tackle problems with Australia’s multibillion-dollar naval shipbuilding plan as more concerns emerge over the complex future submarine and frigate projects”.

There is no suggestion any individual has acted in any inappropriate way. Close relationships are inevitable in government/industry interactions, especially in a specialised area like defence.

Competition of ideas and strategies

The efforts to influence that policy are manifold, including seeding media coverage to suit.

It’s the competition of ideas and strategies and salespeople the public rarely sees.

That multifaceted competition has resulted in bipartisan support by our major political parties to increase the purchase of defence equipment that cements our loss of sovereignty, that leaves the operation of Australia’s two biggest defence programs beholden to a foreign power.

Our very expensive joint strike fighters only work with America’s approval and co-operation. Ditto now for the future submarines.

To paraphrase a point Laura Tingle made on Saturday, we have locked in our defence policy with a country that was capable of electing Donald Trump as president, a country that could do so again, or even much worse. (I forget who it was who first opined that the next “Trump” will be smarter and therefore much more dangerous.)

On Insiders on Sunday, the Nine newspapers’ Peter Hartcher – a hardcore hawk on China – spelt out the point of the nuclear subs deal is for the Royal Australian Navy to join with Japan in supplementing the US Navy to keep China’s subs bottled up in the South China Sea in the event of hostilities.

That’s the real price of the deal, whatever the dollars end up being.

The last time a major Australian political party professed independent foreign policy was 18 years ago when Labor, led by Simon Crean, opposed involvement in the Iraq invasion without a UN mandate.

Since then, “sovereignty” has been little more than a word used to talk up national security fears. And fear sells.

Michael Pascoe: Who sold the nuclear submarines – and our sovereignty?