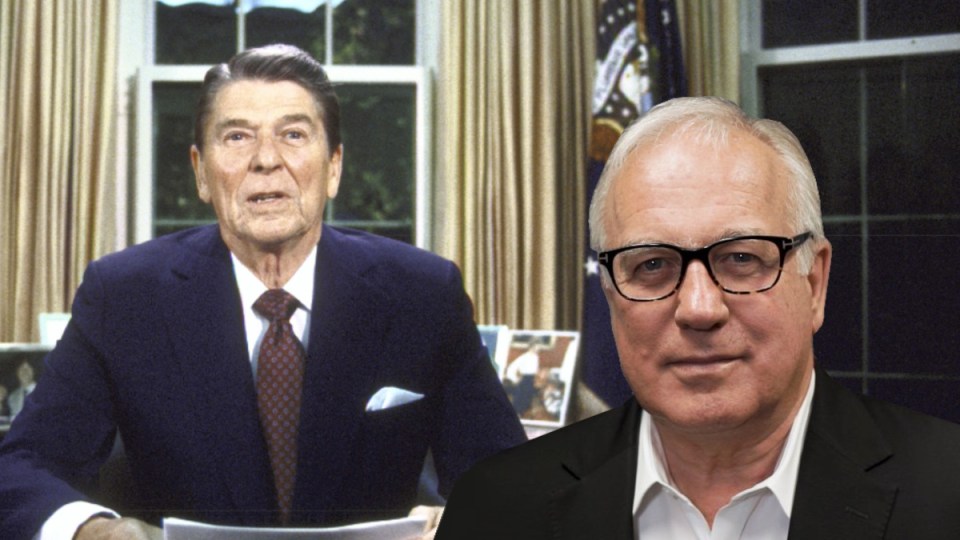 Reaganism has lost its grip on America. But it could take Australia years to catch on, writes Alan Kohler. Photo: TND/Getty
analysis

President Joe Biden’s approach to China, together with the pandemic, are bringing to a close 40 years of Reaganism, and not just in the United States.

Ronald Reagan’s call in his 1981 inaugural address that “Government is not the solution to our problem, government is the problem” led eventually to Australia’s complete privatisation of government-owned businesses, starting with the Commonwealth Bank in 1991.

More broadly, political and economic thinking for most of those 40 years, both here and in the US, has been underpinned by the idea that small government and free markets are better than the reverse.

In fact, it signals that America has had another “Sputnik moment”.

In October 1957, the Soviet Union surprised the world, and stunned the US, by launching the first satellite, called Sputnik.

The Eisenhower government tried to dismiss it at first as a “useless hunk of iron”, but the first thing John F Kennedy did when he was elected president in 1961 was to massively upgrade America’s spending on space technology, with the aim of catching up with and then overtaking the Soviets.

In the 1960s, more than 10 per cent of federal spending, or 2 per cent of GDP, was devoted to research and technology, compared with 0.6 per cent of GDP today, and it culminated on July 20, 1969, with Neil Armstrong and Buzz Aldrin stepping onto the Moon.

Most of the products we take for granted today – the internet, computers, mobile phones, Silicon Valley itself along with America’s technology supremacy – trace their origins back to the surge of state funding in the 1960s.

That burst of government support for technology was followed in 1964 by Lyndon Johnson’s “Great Society”, also known as the War on Poverty.

Johnson expanded the government’s role in education and health care and passed a series of laws designed to alleviate poverty: The Economic Opportunity Act of 1964, the Food Stamp Act of 1964, Elementary and Secondary Education Act of 1965 and Social Security Act of 1965.

Reagan’s election in 1980, following the trauma of Watergate and Jimmy Carter’s single term, represented America’s rejection of the big government policies of Kennedy and Johnson, and kicked off decades of applied neoliberalism – radical small government through reduced taxes and public spending, and privatisation.

Twenty seven years after Reagan’s inauguration speech, the GFC began a shift the other way.

Governments and central banks around the world had to step in and become the solution for the failure of capitalism – it was a financial “new deal” that persists today with fiscal monetary stimulus.

Donald Trump attempted to reverse the rise of government, to Make America Great Again as he saw it, and he might have succeeded had he been half the politician Reagan was, and been re-elected for a second term.

But like Jimmy Carter he lasted only one term, didn’t complete his program, and has been replaced by a big government Democrat.

This time it’s not Russia that America is trying to catch up with, it’s China, and it’s not a satellite that provided the symbol, but a robot on Mars.

After the success of its Zhurong rover in May, China now says it will send a manned mission to Mars in 2033. NASA now has its timetable.

Trump railed against the state-sponsored technological rise of China, but his solution was to try to ban and tax them into submission with tariffs and forcing American companies to decouple their supply chains from China.

But the companies didn’t comply and the tariffs were hopelessly ineffective.

Joe Biden is channelling both John F Kennedy and Lyndon B Johnson at once.

In addition to the $US1.9 trillion infrastructure program and the $US1.8 trillion “American Families Plan”, last month’s “Building American supply chains etc etc” report is basically saying: “If you can’t beat them, join them”.

Unlike Biden’s other big programs, it doesn’t have an all-in price tag – it’s basically an open-ended funding plan and focuses on four key areas for government funding: Semiconductor manufacturing and advanced packaging; large-capacity batteries; critical minerals and materials; and pharmaceuticals.

On semiconductors, the report says manufacturing of them “on American soil” has fallen from 37 per cent 20 years ago to 12 per cent today, and recommends “at least $US50 billion in investments” by the government to stop it declining further.

On batteries, the report says: “Global demand for EV batteries is projected to grow from approximately 747 gigawatt hours (GWh) in 2020 to 2492 gigawatt hours by 2025. Absent policy intervention, US production capacity is expected to increase to only 224 GWh during that period, but US annual demand for passenger EVs will exceed that capacity.”

It recommends $US5 billion to electrify the federal fleet with US-made electric vehicles and $US15 billion in infrastructure investment to build a national charging infrastructure to facilitate the nationwide adoption of EVs (can you imagine the Australian government proposing either of those things?).

It also says the Department of Energy should use its loan program to boost “critical material and mineral refining and processing facilities and to re-equip, expand or establish facilities for manufacturing advanced technology vehicle battery cells” in the US.

They recognise that it’s not “feasible, desirable or realistic” to expect every drug to be manufactured on American soil, so the plan is to work with “like-minded partners” to develop a supply chain that is “not overly reliant on materials or manufacturing from countries that lack a shared interest in mutually beneficial supply chain arrangements”.

That is, anyone but China.

It took a while for Reaganism to arrive in Australia, partly because we had a Labor government at the time.

As America goes into reverse, we have a small government, free market party in power still using the Reagan manual, so “Bidenism” could take just as long to get here if there is no change of government.

But if there is a change, the new manual has been published.

Alan Kohler: China and the pandemic end 40 years of Reaganism